Blinded by Science: The Real Reason Why We Can't Find bin Laden

It is difficult to map a land, and Afghanistan remains as elusive as a terrorist in hiding. 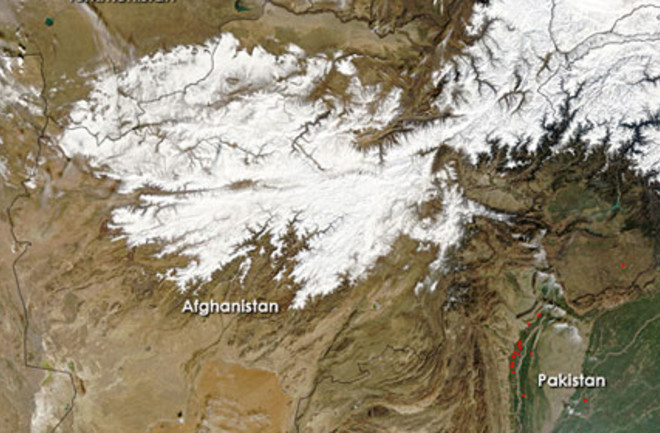 I uncap my pen this morning in defense of a fellow American, one who finds himself rather up against it at the moment. I speak of our president, George W. Bush. The midterm elections give evidence that he has paid a dear political price for what one might term the nation's stiffening conviction that the man couldn't president his way out of the kind of frail, blood-caked paper bag that they are fond of submitting to infrared analysis on A&E's Cold Case Files. But among the various fiascos laid legitimately at the brocaded cowboy boots of our nuance-eschewing commander in chief, there is one for which he is unfairly blamed: the failure to find Osama bin Laden.

It's certainly a funny business, this failure to find him. In the early moments of the War on Terror, it seemed unlikely the man would evade detection for very long—what with his being the only one of our enemies in this newly declared war to have, you know, a name. Thirty seconds seemed a reasonable estimate of bin Laden's remaining life span, now that he personally represented fully one entire side in what was already being talked about as a proper world war. An hour? Well, perhaps, if he had plastic surgery. But a day? A week? A month? This was crazy talk. And now, of course, it's five and a half years later, and the fact that bin Laden's lungs continue to inhale oxygen and convert it to carbon dioxide certainly seems like the sort of thing for which someone should be held responsible.

This might, I suspect, be the point at which you start to wonder what any of this has to do with Science. The answer, I do humbly submit, is an emphatic something. For if President Bush had not so thoroughly alienated the scientific community in the first six years of his presidency, by now they might have spoken up to make the point that in the particular patch in which Mr. bin Laden is supposed to be hiding, no one has ever been able to find anything.

As anyone who's ever tried to arrange the furniture in their apartment by means of a drawing on a cocktail napkin can tell you, making maps of things can be really hard. The difficulty factor quickly multiplies, moreover, when you're talking about the larger square footages involved with nations, bodies of water, and continents. And yet back in the 19th century, the British undertook the challenge of mapping the entire subcontinent of India.

It took a very long time. Started in 1802 by one William Lambton, what came to be known as the Great Trigonometrical Survey sucked up the entire first half of the century, by which point Lambton and his successors had really only managed to map a corridor of terrain from the foot of India to the great wall of mountains—the Himalayas, the Karakorams, the Pamirs—running along the top. Their method, as strongly hinted in the project's title, was trigonometry—specifically triangulation, the creation and measurement of a series of adjacent triangles. Lambton's crew would establish a fixed reference point by laborious observations of star positions over several months, then measure a fixed distance away from the point with the fantastically precise use of metal chains and rods supported by trestles. The distance to a third point could be determined by erecting a pole atop this newly made line and carefully measuring the angles of the triangle thus formed. With that first triangle established, subsequent triangles could be measured by a theodolite (a triangle-measuring instrument), and ultimately the shapes could be linked together into what became the longest continuous measurement of the Earth's surface ever achieved.

The rugged mountains of Afghanistan in a photograph taken by an Apollo 7 astronaut. (Courtesy of NASA<a href="http://rst.gsfc.nasa.gov/Sect6/Sect6_14.html" target="_blank"></a>)

In short, it was an heroic undertaking, so much so that Lambton's successor, Colonel George Everest, would later have the world's highest mountain named after him in tribute to his efforts. Or sort of named after him, since the pronunciation is always botched. For reasons lost in the mists of Everest family lore, the great man insisted on pronouncing his name in two syllables — EVE-rest — which is a word better suited to some sort of over-the-counter product for women than to the single most daunting object to grace Earth's surface.

In the end, however, Everest's imperial paymasters chose not to extend the survey up into the mountains of Afghanistan. Though this region is theoretically just as susceptible to trigonometry as flat terrain, true precision was elusive at such high altitudes. The gravitational pull of those vast chunks of rock wreaked quiet havoc on the plumb lines used to establish location by observation of the stars. More confoundingly, accurate measurements of height above sea level were required. Certain enterprising souls tried rising to the occasion, hauling expensive British-made barometers up mountains before discovering, time and again, that they'd broken in transit, presumably leaking their toxic mercury into the pages of whatever humongous epistolary novel they'd been reading to each other around the campfire. An alternative method was eventually developed, using the different temperatures at which water boils in a kettle at different altitudes to determine height above sea level. But despite the ancient love affair between the British and their kettles, such measurements were rightly recognized as not rising to the level of rigor deployed in the mapping of India.

As a direct result of this decision, the geography of Afghanistan's mountainous region — the region currently home to bin Laden, unless everyone's intelligence is once again wrong and he's actually shooting craps in Monte Carlo — was condemned to a murky state of folkloric imprecision. Such mapping as was attempted during the second half of the 19th century was conducted largely by British and Russian agents sneaking into the region disguised as holy men and scribbling hasty sketches on pieces of paper hidden in their shoes.

As late as 1897 — on September 11, as it happened — a young Winston Churchill described a "topographical reconnaissance" trip near the Khyber Pass, deep in the heart of what is now bin Laden country. "Far below us was a valley, into which perhaps no white man had looked since Alexander [the Great] crossed the mountains," wrote Churchill. "Our guide meanwhile squatted on the ground and pronounced the names of all the villages, as each one was pointed at. To make sure there was no mistake, the series of questions was repeated. This time he gave to each an entirely different name with an appearance of great confidence and pride."

Flash forward a century and it would seem that not much has changed. Recent news stories of bin Laden's possible whereabouts mention "somewhere along the Afghan-Pakistan border," "the Federally Administered Tribal Areas of western Pakistan," and endless poetic variations on phrases like "high, high, among the snowcapped peaks, atop the roof of the world where the eagle's lonesome cry splits the clear, fresh air." The problem isn't so much that we don't know where bin Laden is as that we aren't — and never have been — entirely sure where where he is is. What's needed is for the world's cartographers, heads of state, and perhaps whoever's in charge of Google Earth to sit down around a table and finish the job that Lambton, Everest, and company left undone. Draw a nice bright line around where we know bin Laden is, give the place a nice new name, and then go make Winston Churchill proud.