Blasting Lasers into the Sky To Make Lightning 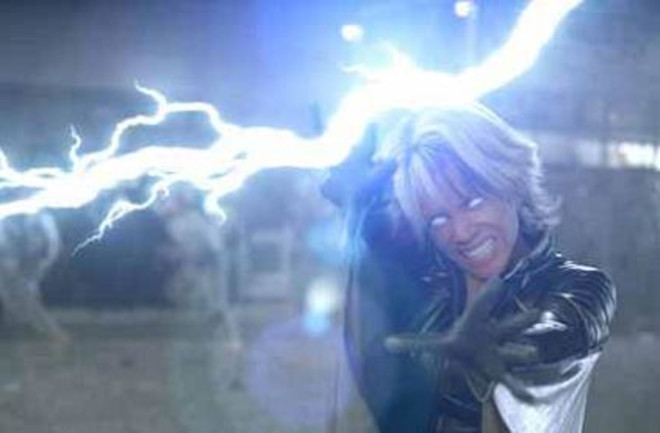 I think it's reasonable to assume that ever since the dawn of humankind, people have yearned to control lightning. (No, Halle Berry did not create this idea for her role in X-Men.) The first approach—rain dances, spells, and the like—proved marginally effective, at best, but there wasn't much of an alternative. In the '70s, scientists found out that if they launched rockets carrying long metal wires into thunderstorms, the wires would sometimes provide enough conductance to coax a lightning strike, much like Ben Franklin's (probably apocryphal) kite string. But around the same time, they also thought it would be much, much cooler to use a laser to bring about lightning. Most things are cooler when accomplished by lasers, as any scientist can tell you. A group of European researchers working at South Baldy Peak have finally realized this longstanding goal by successfully bringing about lightning by zapping lasers into thunderclouds in a recent experiment. The ultrashort laser bursts (only around a hundred femtoseconds) ionize some of the molecules in the air, forming a plasma, and these channels of plasma act can guide lightning strikes like the wires on a rocket. While impressive in concept, laser lightning isn't yet the awesomely impressive display that could replace the laser light show at your local planetarium. For one thing, the bolts only went cloud to cloud rather than between the sky and the ground. Also, the success rate for the laser wasn't all that great; only a statistical analysis of all the strikes throughout the storm could clearly show that the lightning was really due to the lasers. But the researchers say that now that they know it works, it's just a matter of tweaking the conditions to get bigger and badder and more reliable lightning. As you might expect, they say what they really need is a more powerful, longer zap—in this experiment the lasers had only a few millijoules of energy spread over a hundred or so femtoseconds; if they researchers had use of a laser that could lay down a few joules over a couples leisurely nanoseconds, they could cook up some real blast-a-hole-in-the-ground bolts from the blue. Anyone have a super-powerful laser they'd loan out for a good cause?