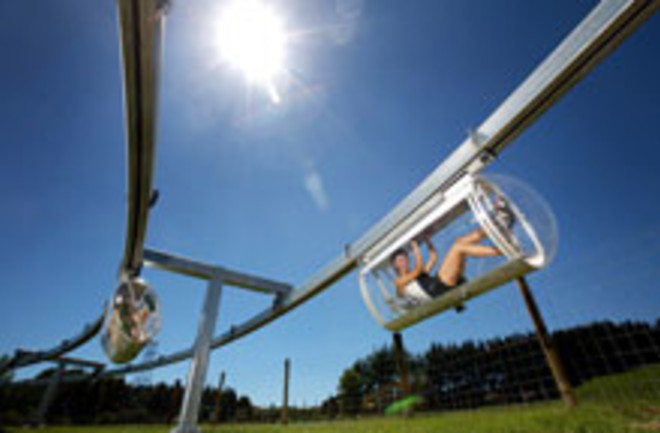 A human-powered monorail system called Shweeb won $1 million from Google's 10^100 innovations contest. The company that manufactured the Shweeb is one of five to be awarded a total of $10 million from the competition. They will use the money to develop the Shweeb for use as a city commuter transport option. The Shweeb efficiently uses human power from a rider sitting in the recumbent seat, pedaling the bubble-shaped pod through the air. This vision for public transportation is a little out there, but the Shweeb has some promise, says Gearlog:

Like all truly forward thinking ideas, Shweeb seems completely nuts at first glance. As a tech blogger I'd love nothing more than to mock Google and it's choice of Shweeb with its poor-man's take on the Jetsons opening sequence. But the more you read about it, the more Shweeb's innovative take urban transport makes a whole lot of sense.

The pod gives you your own personal space (literally a personal bubble) while traveling and allows you to choose where you need to stop - without adhering to a timetable, like a subway or bus. The company will soon announce where the first public Shweeb will be built, and it could soon start cropping up in adventure destinations or cities near you, says PopSci

Shweeb may not be practical for everyone or every city, but for some cities it might make both environmental and fiduciary sense. Compact cities like San Francisco or Boston could have Shweeb lines instead of open-air bus tours, or massive parks like Manhattan's Central Park could avoid clogging up bike lanes with tourists by sticking them up in the air on a monorail.

The pods at the test track

, which also doubles as a $30 adventure ride at Agroventures Park in Rotorua, New Zealand, can travel faster than Lance Armstrong in a bike race, but in use as urban transportation the Shweeb would be limited to around 16mph. The company's website

even claims that the Shweeb is easier than walking:

On firm, flat ground, a 70kg man requires about 100 watts to walk at 5km/h. The power required to move a Shweeb along a rail at 20km/h is only 33 watts. We rest our case!

And even if you get stuck behind a slow-poke, the pods can hook up to each other, and using the combined power of two go faster than either one alone. The website even claims that the pedaling is so leisurely that you can catch up on your email, phone calls, or texting and not even break a sweat. If you've gotten this far in the post, you probably have a bunch of other questions or objections about how there's no way this thing could work. Shweeb has anticipated many of these (or at least fielded them before) and put some useful info on their FAQ page

Cosmic Variance: An Easier Way to Get Around