Next-gen robots that see, feel and learn are taking over factories around the world. 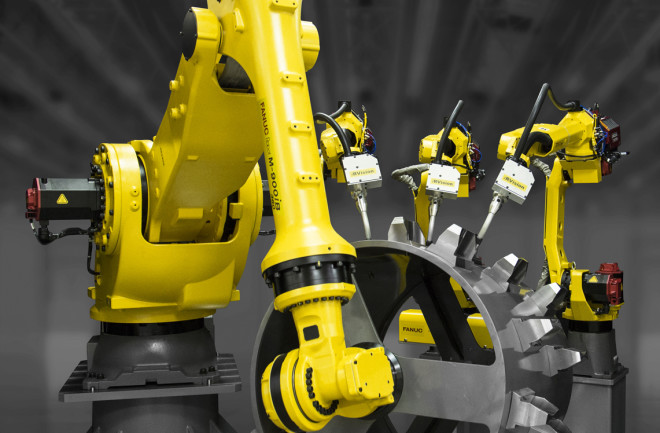 At the foot of Japan’s Mount Fuji, a sprawling campus of large, yellow buildings hides within a forest of pine trees. Inside, an army of robots toils night and day, holidays and weekends, making copies of themselves.

These bumblebee-yellow bots — mostly big, sleek, intelligent arms — are strong enough to lift a Corvette and nimble enough to pack heads of lettuce. The company behind this mechanical kingdom, FANUC, has already built a record of over 420,000 robots. American industry averages just over 1.5 robots for every 100 human employees. FANUC has 200 robots for every factory worker.

Even in 1960, John F. Kennedy campaigned on retraining American workers who eventually would be replaced by automated machines. Yet technology is only now catching up with such visions. By 2019, robotics experts predict more than a million robots will hit shop floors worldwide in what some call the Fourth Industrial Revolution. But these Asimovian achievements weren’t always as inevitable as futurists would have you believe.

It's a vision of a factory that never stops.

In the 1980s, General Motors’ failed modernization attempt showed how difficult it was to get the tech right. Then-CEO Roger Smith tried to beat Japanese automakers with “lights out” manufacturing. He wanted robots automated enough to build cars in dark, lifeless factories. GM partnered with FANUC to build the first generation of those yellow bots. But the tech wasn’t ready. Media accounts revealed robots painting themselves instead of cars.

“GM pushed it harder than the technology could support,” says John Roemisch, a former GM employee and a current FANUC corporate VP. “They were taking 10 steps instead of one step at a time.” Robotics never stopped advancing, but as the dream of fully automated factories slipped further into the future, manufacturing moved to countries with cheap labor.

Then, about a decade ago, FANUC integrated cameras to give robots sight. That killed the high cost of perfectly aligning production lines so robots got parts at precise times. Next, engineers gave robots an ability that previously required human hands: touch sensitivity, so they could snap parts into place and create tight fits.

“Now the latest thing — and what everyone is excited about — is driving the robot to be able to learn, to be able to sense, to be able to communicate,” Roemisch says. FANUC recently teamed with IT mega-company Cisco Systems and industrial powerhouse Rockwell Automation on tech that connects robots, conveyor belts and vibration sensors into one well-oiled machine.

The tech brings the so-called Internet of Things into these manufacturing mainstays, linking devices to one another and the internet. But the ultimate automation goal is what FANUC calls “zero down time.” It’s a vision of a factory that never stops, not even for maintenance. The connected machines monitor themselves, spotting potential problems before they come up, like a car that knows it needs an oil change. Among the early adopters: GM.

But the biggest leap in automation stems from perhaps its least sexy advancement — software. Peter Gratschmayr is a senior engineer at Midwest Engineered Systems, a company that takes robots like FANUC’s and designs systems so the machines can actually build a company’s product. He says today’s software makes robots easier to set up, teach and maintain.

“We’re just at the edge of it now where the software is fast enough, is intuitive enough,” he says. “All these different types of capabilities that weren’t available in the past are feasible now.” That’s allowing industry worldwide to give remaining mundane factory jobs to robots.

A recent Oxford University report predicts computers could take over half of U.S. jobs in the next two decades. And in 2016, the World Economic Forum gathered international political and business leaders to discuss a future “world without work.” Some experts — like Andy Stern, former president of the Service Employees International Union — argue that American workers will need a universal basic income to survive in this post-work economy.

For now, America has seen some “reshoring” — factories that return stateside, as robots offset labor costs. But mostly the jobs they bring aren’t on the assembly line; they’re in software and robot maintenance.

“You’re going to need a high school education or better to be able to work in today’s factory,” Gratschmayr says. “You can still plow fields using an ox and a buggy, but why would you if you could use a tractor?”

[This article originally appeared in print as "Beware the Blue-Collar Bots."]