Augmented Reality Tattoos Are Visible Only to a Special Camera 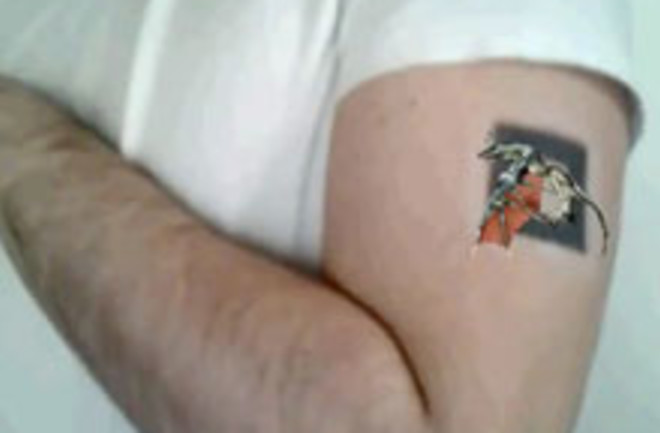 If you've been dying to get a kick-ass dragon tattoo but feel like it might not go over well with prospective employers or your mom, then here's a sneaky, roundabout way to satisfy your yearning. You can get the tattoo using augmented reality--and for an extra dose of kick-ass, the dragon will flap its leathery wings. The concept was developed by a Buenos Aires-based software company called ThinkAnApp. In the video below, you'll see a guy's arm tattooed with what looks like a plain rectangular box. But that box is essentially a barcode. The company has devised a camera with special software that reads this barcode, and then superimposes an animated image. Dvice reports:

When viewed through a specially equipped camera, the seemingly plain box design suddenly displays a three-dimension dragon. The possibilities for art projects, information distribution, and social engineering via body art inherent in this idea are fascinating.

Related Content: The Loom: Science Tattoo Emporium Science, Not Fiction: Seeing The Future, Literally Discoblog: One Small Step Closer to Superhuman Cyborg Vision Discoblog: Will the Laptops of the Future Be a Pair of Eye Glasses? Image: ThinkAnApp