Willard Wigan's pieces fit on the head of a pin, and he paints them with a fly hair. 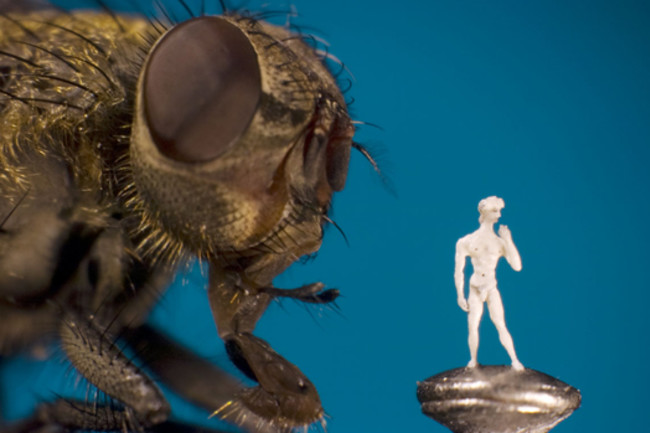 A native of Birmingham, England, Willard Wigan has spent his whole life thinking small. Since the age of five, when he began building houses for ants, Wigan has obsessively produced microsculptures, fully sculpted scenes far too small to be seen with the naked eye. "I wanted to do the smallest biggest thing ever," Wigan says.

He has produced more than a hundred scenes, including the characters of the Wizard of Oz, The Lloyd's of London building, and the Statue of Liberty, all of which could fit comfortably on the head of a pin. 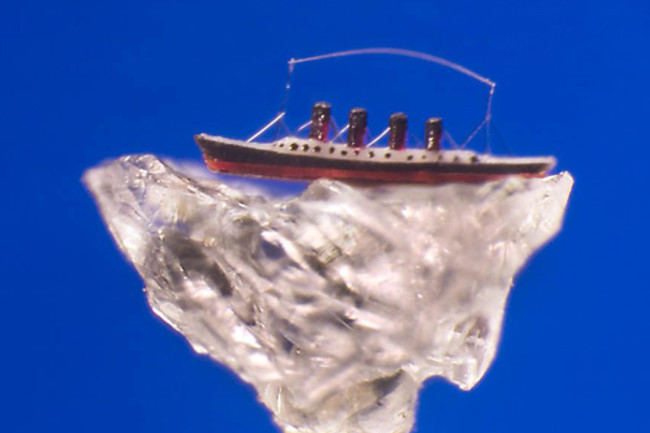 It takes Wigan two to three months to produce one of his miniature masterpieces. He makes his works out of materials like a grain of sand, a flake of gold, or a microscopic piece of nylon.

To carve a rigid material like sand, Wigan says he uses as his chisel a sharp shard of diamond or some other hard gem stuck to the end of a needle. He has to look through a microscope to see his sculpture. 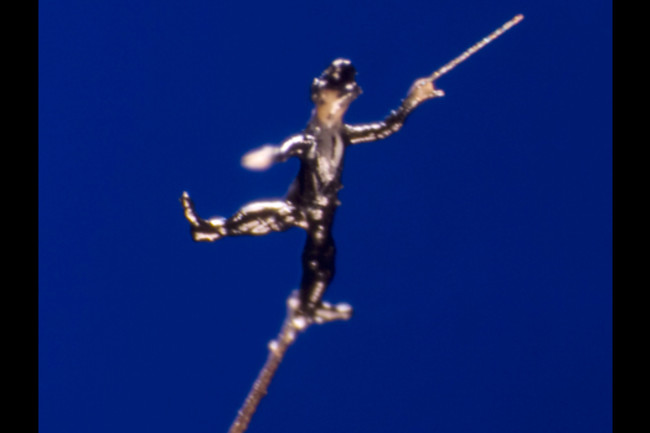 Making microsculptures requires a nearly superhuman level of patience, skill, and also training. To avoid any false moves, Wigan says he taught himself to slow his heart rate and then move only between the beats. To develop perfectly smooth hand motion, he practiced balancing ball bearings on his fingertips. 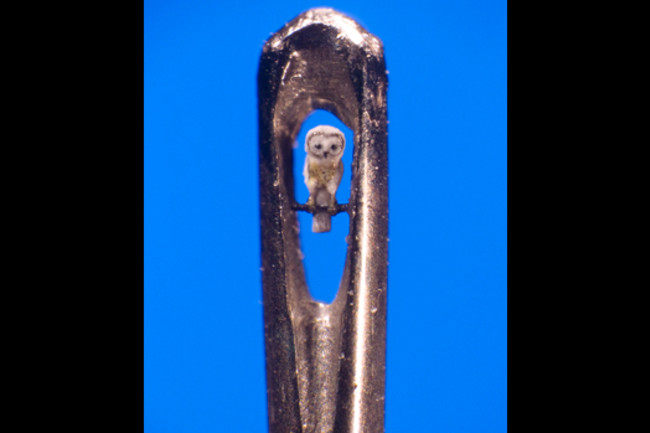 As a boy, Wigan heard the Bible story in which Jesus says that it would be easier for a camel to go through the eye of a needle than for a rich man to enter the Kingdom of God. So he decided to see just how difficult that would be and sculpted a camel the size of a needle's eye.

Today all his microsculptures are about this size--fractions of a millimeter across. Figures within a given sculpture could be three times smaller than the period at the end of this sentence. 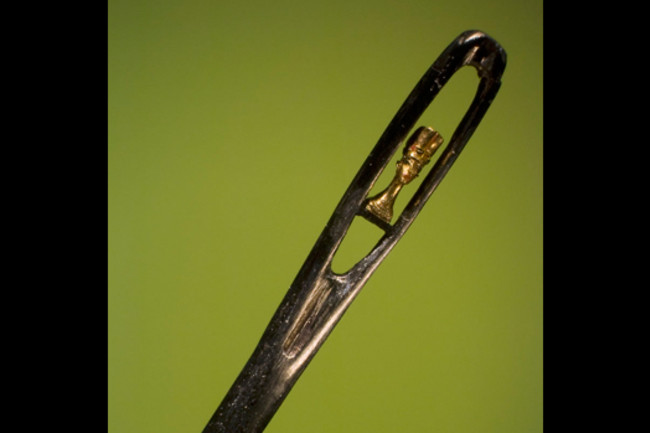 Wigan works in isolated places or at night, because even the vibrations caused by cars driving by outside can interfere with his work. Despite all his care, he still accidentally swallowed several sculptures while making them.

"The process is not enjoyable," he says of his art. 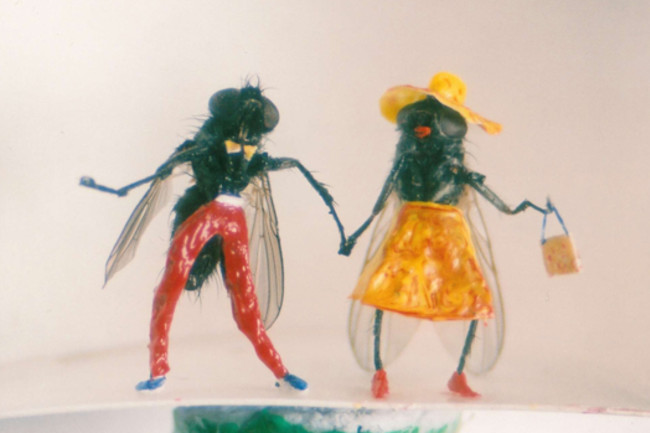 Wigan's works aren't just carved; they're painted as well. To place pigment on such a small scale, he uses a hair from a fly's back as his paintbrush. In this case, he used flies to paint flies. 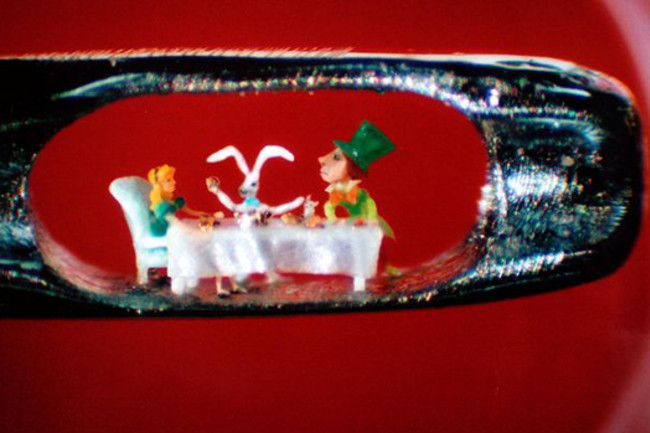 Of all the sculptures, this is Wigan's favorite. Completed about a year ago, the piece shows the Mad Hatter's tea party in Alice's Adventures in Wonderland, a story whose characters can shrink to minute sizes.

It's no surprise that a man obsessed with minutia would love Alice's tale--it's a children's story, he says, and children understand being small. 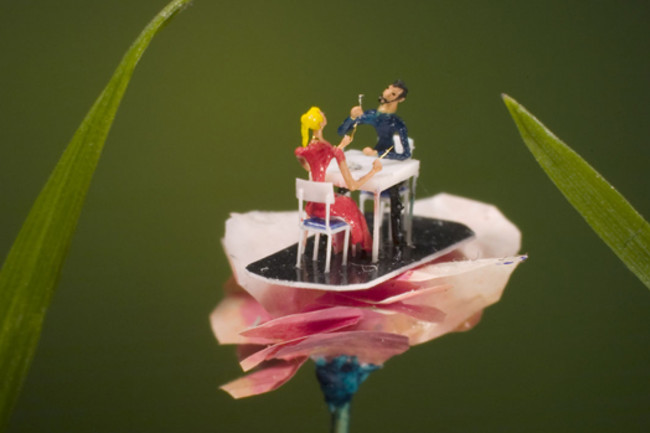 Famous scenes and people aside, Wigan says he often find inspiration for sculptures in everyday life--lovers having a picnic or a man walking his dog.

Currently, he's working on two new pieces. One is the Queen's carriage, complete with eight horses; the other is a white tiger. 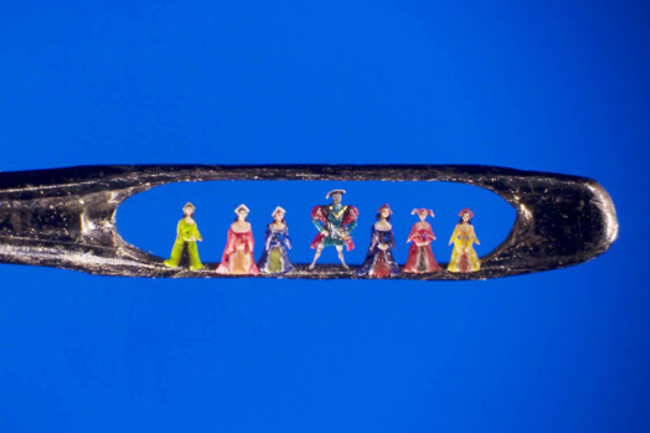 Wigan gets much of his inspiration from things British--Alice's Adventures in Wonderland, the Queen's carriage, Henry VIII and his six wives--and the artist's works reside in his home country, too. The David Lloyd Group of Surrey, U.K., holds most of Wigan's collection, which is insured for 11.2 million pounds--about $22 million.

The works are scheduled to come across the pond soon for a tour of America and Canada. 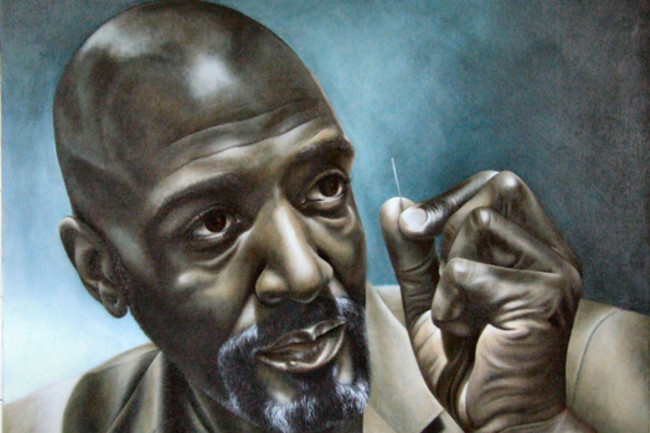 Born in 1957, Wigan has completed over 100 pieces. Still, many viewers of his collection can't believe their eyes, and they often try to check the back of the microscope to make sure they're not being had.

"People think of it as a trick or an illusion," he says. They're simply seeing the apex of human patience and skill.