Armageddon in a Can

The weirdly beautiful aluminum globe above will be the new face of American atomic bomb testing, if it ever gets completed. The 30-foot-wide, 500-ton sphere is the centerpiece of the National Ignition Facility (NIF), a nuclear fusion machine under construction at Lawrence Livermore Laboratory in Livermore, California. NIF is designed to focus 192 laser beams onto a frozen hydrogen pellet the size of a BB, heating it to 100 million degrees Fahrenheit. That miniature conflagration is supposed to replicate the temperatures and pressures of an H-bomb, enabling engineers to maintain the United States' nuclear stockpile without detonating any weapons. But NIF, originally intended to be complete by 2004 at a cost of $1.2 billion, is running four years late and a stunning $2.7 billion over budget, prompting some members of Congress to call for suspending or terminating the project. 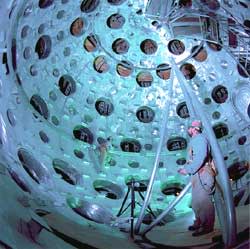