Are We Finally Ready for Self-Driving Cars?

Google isn't the only company working on truly automated automobiles. Robot cars will reduce accidents, ease congestion, and keep others from interfering with my  excellent driving—especially if we can get the bad drivers into them. 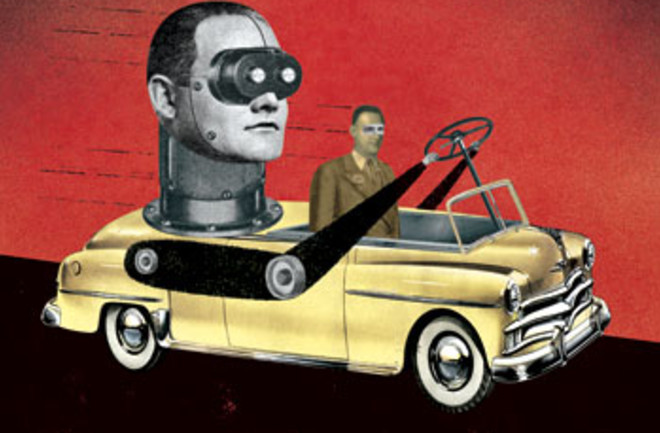 Last year a woman living down the street from me backed out of her driveway as if she were Danica Patrick, without so much as glancing behind her to see if there were any Spandex-encased middle-aged men on vintage racing bikes tooling down the road just then. It turned out there was one, and let me just say that an SUV hood makes a surprisingly cushy landing strip. My brief flight through space and time inspired me to think about this sort of alarmingly frequent stupid driving trick—specifically, how things like this should by now have been rendered obsolete by automation.

I am plenty familiar with the arguments against giving up direct control of our cars. I personally eschew power windows and locks, never mind automatic transmissions, and I proudly raise my Alfa Romeo’s convertible top manually. (For a great upper-body workout, try raising a top at 20 mph. For a great YouTube video, try it at 30 mph.) In fact, I wish my car had more things for me to do manually. I would happily set flaps, trim sails, position heat shields, and load torpedo tubes if only those features were available for my model year. No, I want everyone else’s cars to be highly automated, so they will stay out of my way when they ought to.

You may feel the same way. People tend to overestimate their skills behind the wheel and underestimate the skills of the boobs and psychopaths driving around them, a phenomenon that psychologists call “optimism bias” and the rest of us simply call delusional overconfidence. Statistics bear it out. The Centers for Disease Control and Prevention estimates that car crashes killed nearly 40,000 people and cost more than $70 billion in the United States last year (blog post, the study itself). To make matters worse, the Virginia Tech Transportation Institute reports that nearly 80 percent of car crashes result from drivers’ lack of attention (pdf) to the road.

Automakers, well aware of these statistics, have introduced some impressive driver de-idiotizing systems over the years. Traction control helps prevent skidding; crash-avoidance systems fling radar waves in every direction, looking for approaching vehicles; the Lexus LS series even features a windshield-mounted camera that monitors the lane markings in front of you and gently nudges you back into your lane, via electric motors that assist your steering, if you drift.

But none of these intelligent systems is intelligent enough to cut dumb drivers entirely out of the loop. “The smartest computer in the car is the human brain,” says Lexus’s Paul Williamsen, who trains Lexus dealers on these systems. “Our primary mission is to provide better computer inputs to allow it to make better judgments.” Translation: The car tries to get numbskulls to wake up before all hell breaks loose.

This brings us to what should be the state of the art in keeping your car out of my way: autonomous driving. With all these sensors and trajectory calculators, programming a car to auto-stop or auto-swerve in the face of an impending crack-up should be a no-brainer. But it turns out carmakers may be unwilling to let your car save your butt—and more important, mine—that way. Perhaps they know that if any damage occurs, you have a team of lawyers standing by, ready to argue in court that if the car hadn’t taken over, you would have gracefully swerved around that cement mixer you failed to see barreling down on you after you ran the stop sign while text-messaging.

So the most that cars will do, at least for the next few years, is apply light braking and steering and prepare the vehicle for impact by, depending on make and model, tightening up seat belts, unlocking doors, and turning on the hazard lights. (In Japan the Lexus LS can also slam on the brakes while on cruise control, in deference to that nation’s spectacular highway congestion and relative non-litigiousness.)

This unwillingness to let computers override the terrible decisions of terrible drivers is rather ironic, says Brad Templeton, an influential Internet entrepreneur and expert on civil rights in the digital age; accident avoidance is one of the most appropriate ways to have computers intrude into our lives. So Templeton is pushing for self-driving vehicle systems. Sure, they may occasionally do worse than a human driver would, he concedes, and their imperfections will inevitably even kill people. But, he adds, when you consider those hard statistics on dopey drivers and the trails of destruction (not to mention hyperextended middle fingers) they leave behind, it is hard to argue that automatic systems, once proved safe, will take more lives than they will save. One study conducted by the Insurance Institute for Highway Safety estimates that crash-avoidance technologies could reduce fatal car accidents by one-third, potentially saving many thousands of lives a year. “Human drivers set the bar pretty low,” Templeton says. Tell me about it.

Even as the automotive world has studiously avoided introducing fully auto autos, one chunk of the industry has been working hard to perfect the technologies that make them possible. The U.S. government has been quietly backing an “intelligent transportation systems” scheme that would support automated driving. It would use a 5.9-GHz band (similar to Wi-Fi but faster and more secure) set aside by the FCC to let cars “talk” to each other and to traffic lights to avoid crashes and congestion. Cars beaming short-range radio signals in 360 degrees and broadcasting their exact position on the road at every moment could auto-drive together, bumper to bumper, at high speeds. Add GPS coordinates and such cars could even predict crashes before they happen. Picture a car that calmly informs you of a homicidal maniac approaching an intersection at 30 miles per hour and then calmly recommends that you hang back when the light turns green to avoid imminent death. Or perhaps it would simply make the decision for you. On the flip side, picture a car that threatens to rat you out every time you inch past the speed limit.

Peter Appel, administrator for the U.S. Department of Transportation’s Research and Innovative Technology Administration, says cars that talk to each other and to roadway infrastructure have the potential to eliminate 81 percent of traffic accidents. (Caveat: That impressive figure, pulled from a study commissioned by the National Highway Traffic Safety Administration, excludes intoxicated drivers and assumes that everyone on the road is driving a talking car, that every intersection and stop sign in America can join in the conversation, and that the auto industry agrees on standardized equipment for all this chatter.)

To help inch things along, the DOT recently awarded a consortium of automakers, including Ford, GM, Toyota, and others, $7.4 million to outfit cars with compatible radio transmitters and test them on closed courses. Two years from now, if things go well, Congress could mandate that all new cars be 5.9 GHz compatible by 2018.

The European Union, meanwhile, is taking a more collective approach to autonomous driving. As part of its Safe Road Trains for the Environment project, known as SARTRE, automakers are designing vehicle systems that would let cars safely tailgate on designated highways in a trainlike procession led by a professional driver. Each car in the convoy would measure the distance, speed, and direction of the car in front of it, allowing the “driver” to nap, text, or read the paper without killing anyone. The catch is that they would be available only on certain highways and accessible only to vehicles equipped with the right communications gear. No 35-year-old Alfa Romeo convertibles. Fine with me—you take the high-tech road, I’ll take the low-tech road, the latter being blessedly clear of, well, you.

I’m looking forward to the even longer term, when all cars self-drive all the time, everywhere. Templeton argues that once auto-drive systems are proved much safer than human drivers, it may be downright immoral to let humans drive at all. Indeed, Google already has a fleet of self-driving cars on public roads across the country that have logged 140,000 miles without significant incident or human intervention, and now the company is lobbying Nevada to become the first state to legalize fully automated cars. (In Google's tests so far, there's always been a human in the driver's seat in case something goes wrong—or so they say.) The cars use a suite of cameras, radar, and laser range finders to collect data on the surrounding environment and then feed the info to computers that have been able to make driving decisions just as well as humans.

In a similar vein, Stanford’s robotic Audi, Shelley (video), has proved it can navigate treacherous terrain by satellite alone. In September the car raced 14,100 feet to the summit of Pike’s Peak, handling 12.4 miles of hairpin turns without human assistance. Instead of preloaded maps, Shelley relied on differential GPS to track its whereabouts to within 2 centimeters and used wheel sensors and gyroscopes to keep tabs on its speed and direction. The researchers involved in the project insist that the objective is not to replace human drivers but to give them smarter cars—smarter cars that will indulge your optimism bias while keeping you out of trouble.

Many bored drivers, who already seem eager to embrace any available device or food item within reach, may welcome the chance to relinquish driving chores to a computer. But the reason I can hardly wait for automated cars is so I can finally drive around anywhere without worrying that some lunkhead is about to—Hey, wait a minute. I’d still be allowed to drive, right? Oh well. At least I would have a good excuse to hang onto my beloved Alfa: It will make a great home gym.