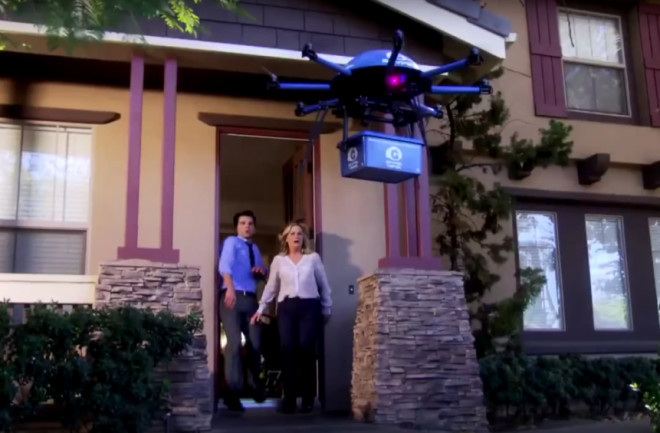 A delivery drone belonging to the fictional company Gryzzl in the NBC show "Parks & Recreation." Credit: NBC Some Americans may be more likely to reach for a shotgun than their wallet if they saw a drone hovering at the door. But a new survey found that a majority of American respondents expect drone pizza delivery to be "normal" by the year 2036. Other predictions deemed "likely" by a majority of Americans in the survey include cashless technologies completely replacing physical money, doctors' appointments in virtual reality becoming routine, and self-driving cars outnumbering normal cars. By comparison, Americans seemed more pessimistic about predictions such as robots outnumbering human beings or people commonly having virtual avatars as girlfriends or boyfriends by 2036. The findings came from a survey commissioned by London & Partners and conducted by MG Insight/ YouGov that used a scientific sampling method to get a representative sample of U.S. adults. The survey was inspired by expert predictions made by the Imperial College London’s Tech Foresight research team at the annual Tech Foresight showcase event from 2015. A total of 2,088 U.S. adults participated in the survey. Here is a quick look at some of the predictions that Americans deemed most likely to occur by 2036.

Cashless technologies have been gaining favor in the U.S. and other countries across the world. Mobile payment systems such as Square Cash and Venmo that allow people to easily share the monthly rent or pay back friends for movie tickets have become especially popular among the younger generations. Mobile banking has also become popular among smartphone users. So perhaps it's no surprise that a majority of U.S. adults surveyed seem to think physical money will go the way of the dinosaur by 2036. Almost 69 percent said the replacement of physical money with cashless technologies was likely, compared with just 25 percent who said it was not likely and seven percent who were uncertain. In fact, the U.S. lags behind Europe and countries such as Japan, Canada, Kenya in terms of cashless technologies. And it may still be premature to kiss the pennies and $50 bills goodbye. Some experts surveyed by the Pew Research Center in 2012 expect older generations of Americans to adopt cashless technologies much more slowly, if at all. Other experts point out that security and privacy concerns may also make some Americans reluctant to abandon cash altogether. In any case, total replacement of cash with cashless technologies also depends on the willingness of big banks and retailers to get on board.

The belief in drone pizza delivery seems reasonable considering companies such as Amazon and Google have already been testing drones as delivery vehicles. Fans of the former NBC show "Park and Recreation" may recall the depiction of Gryzzl (a fictional tech giant loosely based on Google) sending delivery drones to people's homes in Pawnee, Indiana. No wonder 66 percent of Americans surveyed said drone pizza delivery would be considered normal by 2036. Just 27 percent said that prediction was not likely. Seven percent were uncertain. In the real world, Google and Amazon have already been doing some initial drone delivery tests by applying for special permission from government regulators. The U.S. Federal Aviation Administration (FAA) has also been in the midst of developing and rolling out regulations for commercial drone use. But the latest FAA regulations set to go into effect in August may slow any plans for automated pizza delivery by drones. The Guardian points out that the latest rules require each drone to have a human pilot and for the drones to fly within the visual line of sight of those pilots. On the other side of the world, Chinese companies have already dipped their toes into testing drone delivery for everything from mail packages to teas. We more or less have the technology. But much depends on whether government regulators can finalize rules that enable a drone pizza delivery service to safely fly above the streets of cities and towns.

The Doctor Will See You Now in VR

Virtual reality headsets have already been helping to train surgeons and physicians before they step foot in the operating room or emergency room. But 65 percent of Americans surveyed also expect general doctor's appointments to be routinely conducted in virtual reality by 2036. By comparison, 32 percent said such a prospect seemed not likely. Nine percent remained uncertain. Some Americans already use mobile apps and online video conferencing to see their doctors. Teladoc, the largest U.S. provider of such telemedicine services, enabled physicians to remotely see patients by performing 575,000 "telehealth" visits in 2015. Hospitals have even experimented with telemedicine robots that enable physicians to remotely visit and see patients. But transforming such video-based experiences into the immersive, 360-experience of virtual reality would require significantly more expensive camera setups and virtual reality headsets for both physician and patient. Even if that became possible, it's unclear how much added benefit virtual reality would provide if the physician cannot physically examine or otherwise interact with the patient. That means virtual reality technology might have to be combined with a telemedicine robot controlled by the physician so he or she could move around and possibly interact with the patient. Make Way for Driverless Cars The rise of self-driving cars rounded out the top four predictions deemed most likely to occur by 2036. Specifically, 60 percent of Americans surveyed said it was likely that there will be more driverless vehicles than regular vehicles on major roads. By comparison, 32 percent of Americans said that prediction seemed not likely and seven percent were uncertain. Such confidence in driverless vehicles may come as no surprise given the predicted benefits of convenience, improved road safety and possibly less traffic gridlock. U.S. tech giants and automakers have been racing to develop their own visions for driverless vehicles for some years. Google in particular has been testing self-driving versions of modified vehicles and new prototypes capable of operating without human drivers. But it has plenty of competition from other tech companies such as Apple and China's Baidu. Traditional automakers such as General Motors have also aimed to get in on the driverless vehicle action alongside startups such as Elon Musk's Tesla. Even ridesharing services such as Uber and Lyft want to develop their own robot taxis. The National Highway Traffic Safety Administration (NHTSA) aims to release federal guidelines on self-driving cars by July while still allowing individual states to make additional rules, according to the Wall Street Journal. But even if regulators pave the way for self-driving cars to hit the roads, the pace of adoption still depends on several factors. First, the price tag for such advanced vehicles will determine how willing even the most eager customers are to pay more for a self-driving car. Second, people will have to learn to trust the new experience of a self-driving car doing its thing on the road. And third, it's uncertain how many drivers who enjoy being in control behind the wheel will resist changing over to a driverless vehicle. For more details on the survey, see the original press release here.