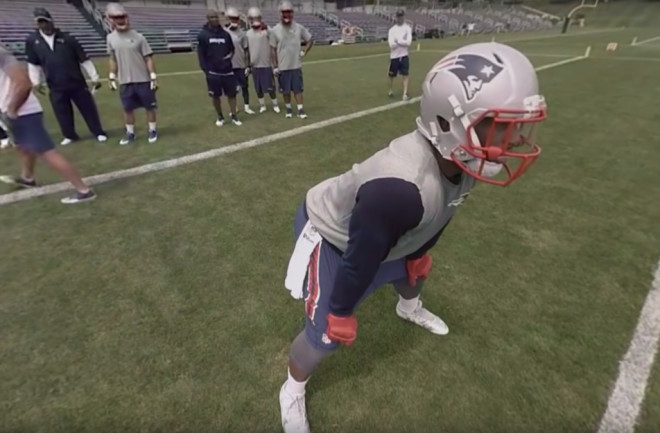 Credit: VISA | Bank of America | New England Patriots You can't learn kung-fu from downloading a program in "The Matrix" just yet. But this year, a growing number of American college and professional football teams have signed up for virtual reality training to enhance the real-world skills of their players. And American football's newfound love of virtual reality has gone public as teams distribute thousands of virtual reality headsets to fans or post 360-degree videos on Facebook to support Heisman Trophy candidates. The New England Patriots represent one of the National Football League teams that have gone down the rabbit hole with virtual reality (VR). The professional football team gave out about 10,000 Google Cardboard headsets during a Patriots vs. Philadelphia Eagles game on Sunday, Dec. 6, according to TechCrunch. Google Cardboard devices enable anyone to view virtual reality experiences on their smartphone—in this case a time-lapse tour of the Patriots' locker room and field practice sessions. Even if you don't have a virtual reality headset, you can view the Patriots' experience as a 360-degree video. https://www.youtube.com/watch?v=qfMXuQiqNWA The Patriots VR experience for fans was created through the STRIVR virtual reality platform. STRIVR's main use involves a form of VR training that allows athletes to immerse themselves in past plays from the perspective of a particular field position. Such training has already caught on with a number of professional football teams such as the Patriots, Arizona Cardinals, San Francisco Giants, the Dallas Cowboys, the Minnesota Vikings and the New York Jets. STRIVR originated from a meeting of minds at Stanford University. Derek Belch, a kicker on the Stanford football team in 2007, took a class on virtual reality with Jeremy Bailenson, head of the Virtual Human Interaction Lab at Stanford. Six years later, Belch approached Bailenson again as the Graduate Assistant coach with the Stanford football program. Together, they spent two years creating and refining the 360-degree experiences that would enable football players to study and relive practice film in a new, immersive way. Stanford's football team became the first to benefit from such VR practice starting in 2014, but other college teams and professional teams have signed on since STRIVR Labs became a full-fledged company in 2015. Like the Patriots, Stanford has not shied away from using VR-style videos to promote its football program. On Dec. 5, the Stanford football organization posted a 360-degree video on Facebook as a way of promoting running back Christian McCaffrey as a contender for the coveted Heisman Trophy. It's not quite a true VR experience, but the video still enables mobile users to look around by tilting their smartphone or tablet devices. (Desktop or laptop users can look around by clicking and dragging with a computer mouse or touchpad.) https://www.youtube.com/watch?v=-qKH2gM_UjE American football won't be the only sport to benefit from either VR training or VR marketing. STRIVR and competitor Eon Sports VR, a product of Eon Reality, seem to also be targeting other sports such as basketball, hockey and baseball. Some VR training experiences focus on immersion but don't necessarily allow the user to interact with the VR experience. Others, such as a baseball training simulator developed by Eon Reality, enables players to practice batting against Major League Baseball pitchers. It's a pretty safe bet that more sports teams and fans will end up entering "The Matrix" in the near future as VR headsets become more common. The Patriots' giveaway of Google Cardboard headsets represents perhaps the largest such effort yet among professional sports teams. But that giveaway is dwarfed in comparison with a New York Times VR journalism effort that distributed over 1 million Google Cardboards to news subscribers.