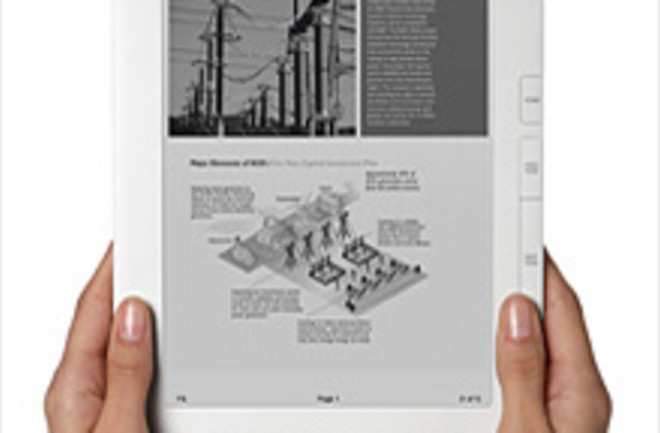 The online bookseller Amazon is expected to unveil a larger model of its Kindle e-reader at a press conference today, and the company hopes that the device will revolutionize several old-media industries: textbook publishing and the newspaper and magazine business. Photos show that the new reader will be about the size of a sheet of paper and will have a 9.7-inch screen, which will be more conducive to displaying content from textbooks, newspapers, and magazines. The new product will be unveiled at Pace University, one of six colleges that will use the Kindle to distribute course material to students next fall in a technological test run. Experts say that bringing college textbooks to a light and portable e-reader

makes loads of sense. Anyone who's been to a U.S. college in the past few decades could tell you that textbooks are very highly--some would say obscenely--priced. They're also bulky, and often difficult to get rid of once purchased: Selling the third edition of an introductory biology textbook on the used-book market is pretty difficult when the fourth edition comes out a year later. Theoretically, this should be the perfect market for an electronic reader like the Kindle.... "I do think the textbook market will be the killer app for e-readers," said Sarah Epps, a media analyst at Forrester Research [CNET].

However, Epps added that it would probably take several years for the technology to catch on, and for publishers to reach acceptable profit-sharing agreements. The new Kindle and other e-readers that are in the works have been eagerly anticipated by the newspaper industry, which is in economic free-fall as readers drop their print subscriptions and turn to free versions on the Internet. The new devices

offer an almost irresistible proposition to newspaper and magazine industries. They would allow publishers to save millions on the cost of printing and distributing their publications, at precisely a time when their businesses are under historic levels of pressure.... “The severe double whammy of the recession and the structural shift to the Internet has created an urgency that has rightly focused attention on these devices” [The New York Times]

, says John Ridding, chief executive of The Financial Times. By offering subscriptions to a newspaper via an e-reader, newspaper companies hope to reverse what some now see as their fatal mistake: offering their content for free online. The Kindle will have competition. Among the other companies working

with print publishers is Plastic Logic, which is developing a reading letter-sized tablet.... Designed to include advertisements as well, Plastic Logic's device is expected to launch only early next year [PC World].

The magazine and newspaper publisher Hearst is also reportedly working on an e-reader. However, critics of all these devices say that their stiff structure, black and white displays, and lack of video and other rich multimedia features will prevent them from catching on as a way to get the news or browse a magazine. Some point to Apple's expected introduction of a tablet computer about three times the size of an iPhone as a better option, which would give users easy access to the free internet versions of newspapers. Related Content: 80beats: Chameleonic Synthetic Opal Could Lead to Full-Color Electronic Paper 80beats: Electronic Ink Changes the Game for Newspapers and MagazinesImage: Amazon