Amazon's Drones Could Follow You to Complete a Delivery 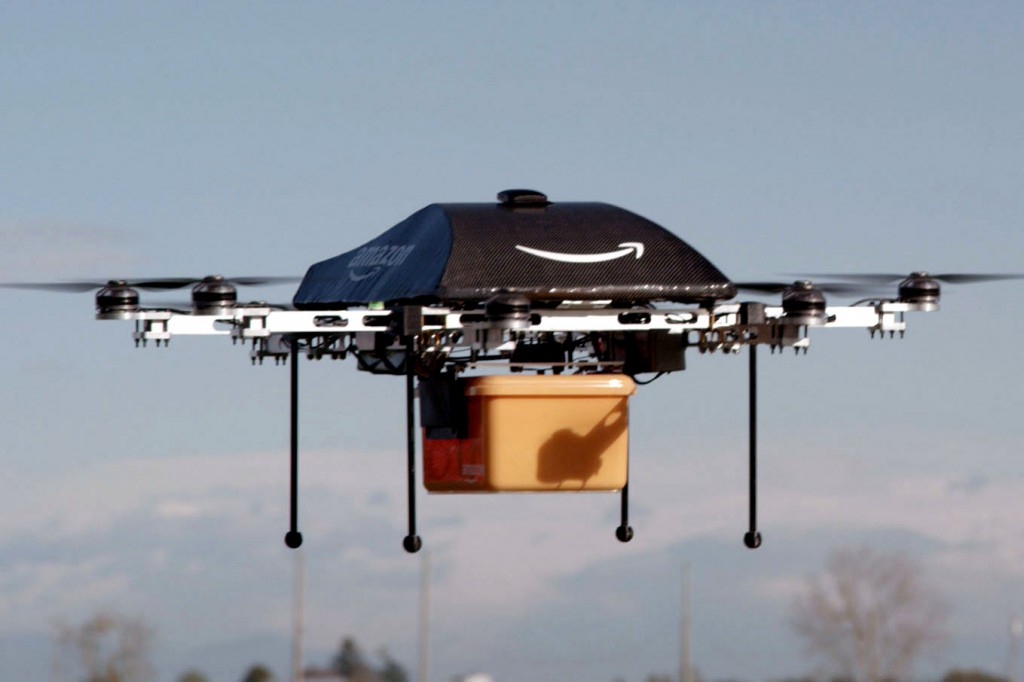 If Amazon’s drone delivery service ever gets airborne, the company’s drones may follow you to work to deliver your package. That’s one of the more intriguing details included in Amazon’s patent application, approved April 30, which lays out the company’s plan of operation for its delivery drones. The document indicates that Amazon's vision for drone deliveries is a lot bigger than just moving a package from point A to point B.

First, let’s answer the question that’s probably on your mind: Amazon’s drones will follow me? The short answer is yes — if you want them to. According to the patent application, customers would be able choose a method of delivery and a drop-off point from a list of locations. However, if you wanted guarantee your human-drone rendezvous, Amazon’s drones would determine your location based on GPS data broadcast from your mobile device. “The user may place an order for an item while at home, select to have the item delivered to their current location (delivery within 30 minutes of the order) and then leave to go to their friend's house, which is three blocks away from their home,” the patent reads.

Amazon’s application includes other tantalizing details. While in the air, Amazon drones would constantly communicate with each other to share information about air traffic, weather and the presence of humans or animals. Based on this information, delivery drones would adjust their course and follow an ideal route to the customer. When the drone reaches its delivery point, it would "safely approach the ground, or another surface." And once the drone finds a safe landing spot, it would store that location in a database for future deliveries. Amazon’s filing also indicates that these landings may not be fully autonomous, and could be accomplished “through assistance of a remote entity controller.” When delivering on autopilot, the drones would use flight sensors, sonar, and infrared sensors to scope out a proper landing area, the patent said. No Guarantees Amazon’s plan may sound pretty crazy, but don’t get your hopes up yet. Winning a patent approval doesn’t mean everything in it will come to fruition. That patent mostly serves to protect Amazon from competitors that might attempt to launch a similar service. In fact, Amazon still has some big obstacles holding back their aspirations. The Federal Aviation Administration tightly controls the commercial drone industry, and that’s been a big sticking point for the folks at Amazon. And the company, for some time, has been testing its delivery drones — primarily in other countries — to iron out technical kinks. Fortunately, changes seem afoot for commercial drones. The FAA on Wednesday announced its “Pathfinder” program, a partnership with news network CNN, the rail company BNSF and drone maker PrecisionHawk to explore new uses for drones. Both BNSF and Precisionhawk will experiment with beyond-line-of-sight commercial drone flights, which are currently banned. Amazon’s drone delivery service is certainly an interesting endeavor, but only time will tell what it may ultimately look like.