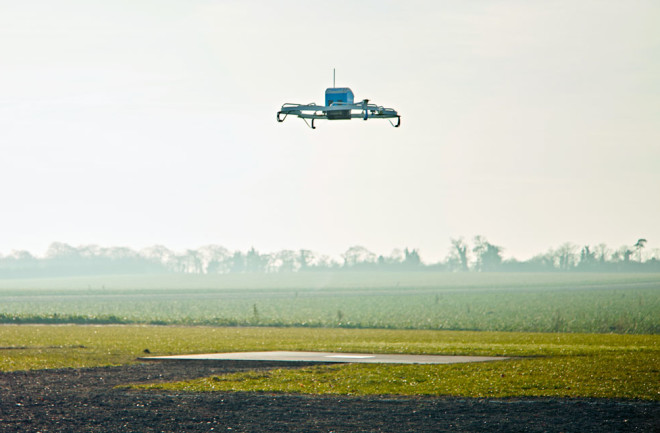 A private trial of one of Amazon's delivery drones. (Credit: Amazon) In its quest to streamline consumption, Amazon has wholeheartedly embraced the promise of drones. Earlier this month, a fully autonomous Amazon drone delivered its first package in the United Kingdom — an Amazon Fire TV and a bag of popcorn — in just 13 minutes. The company says it hopes to expand the program in coming months, allowing select customers to have their packages brought to them via drone, weather permitting of course. Any such implementation in the U.S. will have to wait a little longer, as current FAA regulations do not permit drones to be flown out of a pilot's line of sight. Amazon seems to anticipate that those rules will soon change, however, and has filed a bevy of patents over the past couple of years aimed at upgrading their drone technology to make it fast, safe and efficient. These patents may never see the light of day, of course, as it's common for corporations to snap up the rights to forward-looking technologies before they come to fruition. Nevertheless, if you want an idea of what the future of delivery could look like, Amazon's presence at the patent office is a pretty good place to start.

(Credit: USPTO) As Zoe Leavitt, an analyst for CB Insights pointed out recently on Twitter, Amazon has filed a patent for what amounts to a giant floating warehouse filled with drones and goods. Floating at 45,000 feet, the mothership would dispatch dive-bombing drones, taking advantage of the extreme altitude to widen the drones' range and shorten delivery times. Additional airships would be used to shuttle drones and items up to the craft. Due to weight limitations, orders of this nature would likely be restricted to some of the lighter and most popular items.

A prototype drone from Amazon. If Amazon wants its drones to compete with the postal service and their iconic descriptor, it's going to need machines that will work in snow and rain, heat and gloom of night. To that end, the company has filed a patent for modular drones that can be assembled and optimized for the type of delivery they will be conducting. Before a package leaves the warehouse, a computer will monitor weather conditions, route topography and the payload and assemble a list of optimal drone components along with the order. Then, an autonomous assembly line robot would pick the ideal mix of thrusters, airfoils, batteries, and sensors necessary to build a drone that's perfect for a specific delivery, regardless of the weather or the location.

(Credit: USPTO) Though they may be machines, even drones need a place to rest sometimes. A series of dedicated landing spots along a drone's route could help it to make longer trips, or provide shelter should it encounter unexpected difficulties. Amazon envisions installing these perches on electric poles, church steeples and other tall structures across a city, where beleaguered drones could recharge or exchange packages. A centralized computing system would even plan routes using a series of these stations to leapfrog across greater distances. In addition, the poles could double as towers for internet service, Amazon says, reducing the need for additional infrastructure in some areas.

(Credit: USPTO) Just as with our smartphones, Amazon wants to make drones an indispensable personal assistant. The company filed a patent describing a system for small drones that could perch on a shoulder or fit in a purse, soaring when needed above a crowded parking lot to find a car or to pick a lost child out of a crowd. The lightweight design would be paired with an off-board processing system meant to minimize the size of the drone while retaining the abilities of larger machines. As Amazon points out, the technology would also be useful for police at traffic stops and firefighters searching dangerous buildings, among other emergency applications.

(Credit: USPTO) If, and when, drones fill the sky, there will inevitably be those who attempt to waylay or damage them. To deal with potential threats, Amazon filed a patent in 2014 outlining a variety of ways that drones could be programmed to evade danger and ensure their survival. If a drone should be hacked or its signal jammed, they describe a system that detects any foul play and overrides the drones' controls to land it safely on the ground. Amazon plans to use a "mesh network" of multiple drones in communication with one another to provide redundancy and monitor each other's status. If a drone gets compromised, it could be told via the network to remain in place or land. The patent application also foresees the possibility of physical attacks on drones, such as with bows and arrows (or spears). Although the exact defense system sounds a bit vague, Amazon says that its drones could be programmed to recognize potential threats and then take evasive maneuvers to avoid the potential hail of arrows. The system would also broadcast the drone's location and call in the cavalry.