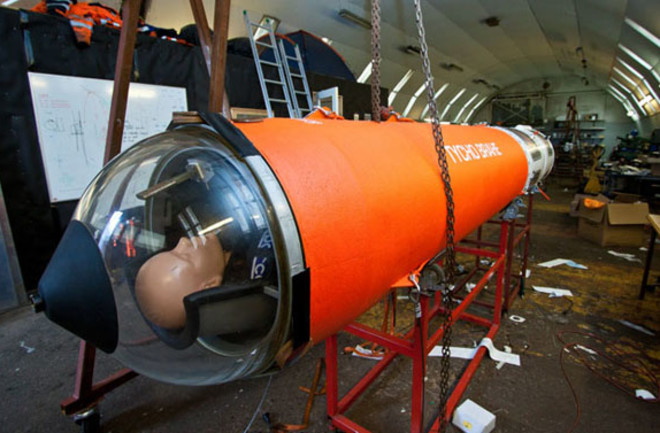 The fourth nation to put a person in space, after Russia/USSR, the United States, and China, could be... Denmark? Denmark indeed. Kristian von Bengtson and Peter Madsen, the leaders of Copenhagen Suborbitals, plan to fire a test flight of their HEAT-1X rocket from the European nation early next week.

This upcoming flight will be an unmanned test flight, but if all goes well, Madsen hopes to be inside the single-passenger capsule named Tycho Brahe for a manned flight in the near future [Universe Today].

The capsule stands about 10 yards tall, and its top is a clear glass dome through which the standing passenger can enjoy the trip to space. (Or at least, try to enjoy it: The cramped passenger will have only minimal arm movement, just enough to operate necessities like a camera, escape hatch, and vomit bag.) The rocket would carry the capsule to the edge of space, where the passenger will be temporarily weightless, and then it will fall in a parachute-slowed descent. Madsen and von Bengtson are both engineers, and the latter used to work for NASA. But their rocket project didn't receive government funding; instead they built on a budget of about $63,000 brought in by donation. Says von Bengtson:

"I think our entire budget would barely cover the cost of the key hole on the shuttle. We want to show people that space doesn't need to be the exclusive domain of big money investments where everything is made out of titanium in clean rooms by people wearing white slippers. We want to give space another face" [The Independent].

OK, but what about safety when you're building on a non-profit's budget?

The creators are members of the SomethingAwful web community, and have been posting pictures and answering questions there. In response to one question asking what the chances of the person inside dying are, they replied: “Unlike Columbia we’re not moving at orbital speeds so ‘dying a gruesome death burning up on re-entry’ with our kit has a very low outcome probability” [Wired.com].

(If you're wondering about the capsule's namesake, Tycho Brahe

, he was a 16th century aristocrat who famously identified a supernova. Some Tycho trivia: He also reportedly lost part of his nose in a duel and lived the rest of his life with a metal replacement. We wish his namesake capsule and its builders a better fate.) Related Content: 80beats: A Trip to Mars Could Reduce Astronauts’ Muscles to Spaghetti

DISCOVER: 20 Things You Didn’t Know About… Living in Space