Airline Passenger Refuses to Be Groped by Security; Becomes a Folk Hero 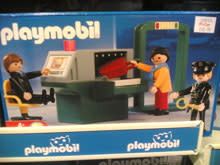 John Tyner missed his flight to South Dakota for a pheasant hunting trip with his father-in-law. He wasn't late to the airport, he didn't get lost in the terminal. He never made it into the terminal because he wouldn't partake in either a whole body scan or a physical pat-down of his genitals. After arriving at the airport, Tyner was pulled aside to go through a "whole body scan," an radiation-based machine that takes an image of your body under your clothes. He "opted out" of the scan only to realize the alternative is just as bad. He asked the TSA officer who was patting him down not to touch his privates. Actually, he said: "If you touch my junk, I'll have you arrested." The matter quickly escalated, according to his blog post about the incident:

She described to me that because I had opted out of the backscatter screening, I would now be patted down, and that involved running hands up the inside of my legs until they felt my groin. I stated that I would not allow myself to be subject to a molestation as a condition of getting on my flight. The supervisor informed me that it was a standard administrative security check and that they were authorized to do it. I repeated that I felt what they were doing was a sexual assault, and that if they were anyone but the government, the act would be illegal. [John Tyner's blog post]

After the incident, Tyner was escorted from the area, and was able to get a refund on his ticket and was eventually allowed to leave the airport, but not without being threatened with a $10,000 fine for doing so without having finished the screening procedure. At his blog

you can read his post about the event and see his videos (he apparently had his smart phone recording video throughout much of the incident). According to the TSA's website, there are currently 386 of the whole-body imagers at airports around the US (at 68 different airports), though their numbers are expanding to about 1,000 machines (450 paid for by stimulus funds) by the end of 2011. The imagers are supposed to be being used as a secondary line of screening, though according to some anecdotal reports from passengers around the country it seems that's not always the case. Worries about the health effects of repeated low-doses of radiation, along with privacy issues and questions of what happens to the pictures of the digitally-undressed after they have been cleared, have started to catch up to the TSA as these machines become more widespread and people become more interested in keeping their privates private

. If a passenger is asked to take part in whole body screening and opts out of the procedure, he or she is subjected to the TSA's new and "enhanced" pat-down procedures. Agents are instructed to use open hands and fingers to probe for any possible contraband on a person's body, including lifting up the breasts and feeling in between the legs. Continuing outrage by travelers has led one group to pronounce November 24th (the day before Thanksgiving) as the national "opt out day," encouraging travelers to say no to the machines.

It's the day ordinary citizens stand up for their rights, stand up for liberty, and protest the federal government's desire to virtually strip us naked or submit to an "enhanced pat down" that touches people's breasts and genitals in an aggressive manner. You should never have to explain to your children, "Remember that no stranger can touch or see your private area, unless it's a government employee, then it's OK." [National Opt-Out Day]