Adult Mouse Gets a New Tooth, Grown From Embryonic Cells 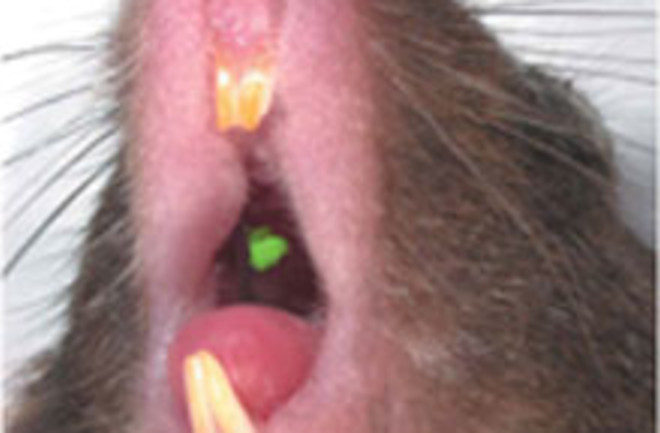 In a discovery that could be good news for denture users, scientists have grown teeth in adult mice using cells taken from a mouse embryo, according to a study published in Proceedings of the National Academy of Sciences. The method could pave the way towards the regeneration not just of teeth, but also human organs like livers and kidneys. Scientists took tissue known as "tooth germ" from a mouse embryo and separated out two types of cells, which they recombined into a new bioengineered tooth germ. That tissue was then implanted into tooth sockets in the mouths of laboratory mice. After 37 days each clump of cells, which originally measured 500 micrometers, or 0.02 inches, had grown into a tooth visibly sprouting from the jawbones of the mice.

The researchers also tracked gene expression in the engineered tooth "germ" with a fluorescent protein. This revealed that genes that were normally activated in tooth development were also active during growth of the engineered replacement [BBC News].

The implantation of the tooth "germ" was made possible by a method developed by the same team of scientists in 2007, which allowed them to grow immature teeth inside of the stomachs of embryonic mice. The lab mice were able to use the implanted teeth to nibble away just as they would any other choppers. The researchers also found that the new teeth grew in with nerve fibers, allowing the mice to sense pain on the tooth, and that they also were as durable as the mice's original teeth.

, said the study's authors. The study marks the creation of the first bioengineered tooth that performs the same functions as those that grow naturally. Scientists hope the technology could one day be used to generate other organs such as livers and kidneys, but caution that these developments could be far away.

"Each organ is different, so it may take a long time before we can actually use this system in a clinic" [National Geographic News],