A Promising Spark For Lab-Made Fusion 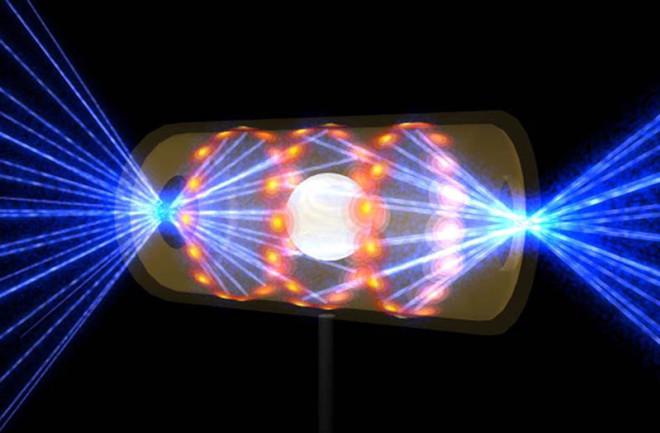 A rendering shows the laser beams entering the capsule, where they compress and heat the fuel to trigger nuclear fusion. | Lawrence Livermore National Laboratory/National Ignition Facility

Sign up for our email newsletter for the latest science news
The cylinder (above) that contains the fuel capsule is just a few millimeters wide. | Lawrence Livermore National Laboratory/National Ignition Facility

In a lab east of San Francisco, physicists trained 192 lasers on a plastic sphere the size of a BB. Inside were ingredients for a powerful fusion reaction similar to the kind that makes our sun hot and glowing.

When they switched the lasers on, the Lawrence Livermore National Laboratory scientists found that more energy came out of the fuel than went in. The research, reported in February, is a crucial milestone toward tapping the power of lab-made fusion.

A rendering shows the laser beams entering the capsule, where they compress and heat the fuel to trigger nuclear fusion. | Lawrence Livermore National Laboratory/National Ignition Facility

In fusion reactions, hydrogen isotopes meld together, creating high-energy alpha particles. The key to increasing the captured energy was to keep these particles trapped inside the container, feeding energy back into the reaction.

To make fusion a viable renewable energy source, scientists still have work to do: Some of the lasers’ energy was lost before even making it to the tiny bead. The energy produced needs to increase at least a hundredfold for the total energy it takes to turn on a fusion reaction to be less than the total energy gained. Still, this is a spark.