A Leap in Quantum Computing

The first successful quantum teleportation of data in a computer chip is demonstrated. 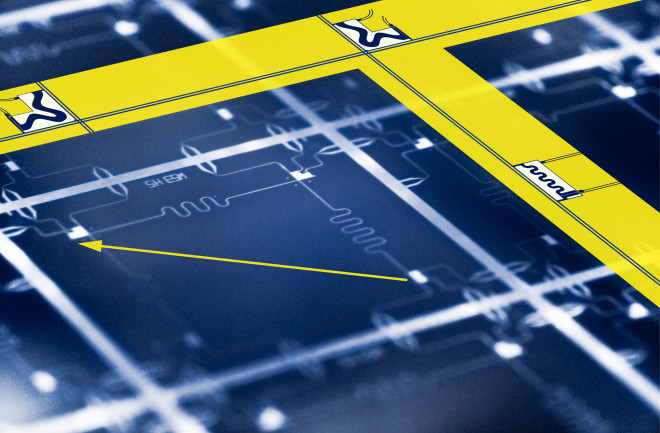 Quantum teleportation of data across a superconducting chip (like this one made from niobium, sapphire and aluminum) is essential for quantum computing. | P. Kurpiers, M. Pechal and Y. Salathe, ETH Zurich

Einstein called the phenomenon “spooky action at a distance.” Today’s physicists call it entanglement. Whatever term you use, the descriptor refers to the ghostly link between subatomic particles that act in tandem no matter the distance between them.

Already, researchers have tapped entanglement to teleport information instantly over hundreds of miles. But the most pragmatic application could be quantum computing, so-called because such computers would operate according to the physics of subatomic particles, known as quantum mechanics.

Computers that can teleport information could work orders of magnitude faster than today’s machines and perform tasks in parallel, a necessary trick for cracking the most difficult security codes or parsing reams of genomic data in minutes, tasks that might take ordinary computers years.

Teleporting information within the restricted space of a computer, however, has posed a technical challenge — until now.

Last August, physicists in Switzerland successfully teleported information 6 millimeters between two corners of a superconducting chip made from niobium, sapphire and aluminum; the superconducting chip is the basic building block for a quantum computer. The data were encoded by altering the energy state of the circuit: High energy corresponded to a binary digit (or bit) of 1, and low energy to a bit value of 0.

A distance of 6 millimeters may sound paltry, but it is a significant feat when encoded data must hop between solid superconducting materials, notes team leader Lars Steffen. And it is enough of a leap to enable the quantum machines.

The team’s next goal is to teleport information between two different chips, a step that would allow the machines to work faster still.

[This article originally appeared in print as "A Leap in Quantum Computing."]