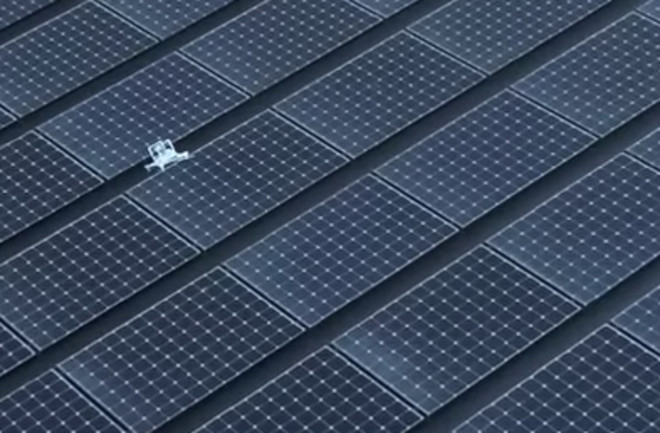 Upside down, on top of a solar roof is not how you want a drone flight to end. Not at all. (Credit: Matthew Roberts/YouTube) It turns out more than just Apple employees are crashing into the Apple campus. (Seriously, they're running into its glass walls) A drone pilot recently crashed a drone at Apple Park — Apple's spaceship-like headquarters in Cupertino, California. Unfortunately, the pilot didn't know where the precious drone crash-landed, so he recruited a fellow drone operator to help. Matthew Roberts, known for his drone videos documenting the development of Apple Park, and his DJI Phantom 4 Pro came to the rescue.

The beginning of the below video shows footage of the drone crash, which as a drone pilot is hard to watch. It seems like the flight was going well, when all of a sudden the drone just starts to fall. Since DJI (the drone appears to be a DJI Phantom model) allows users to save video to their phone or tablet during flights, this is likely how the footage was obtained. Roberts eventually spotted the fallen-drone on one of the many solar panels atop the building. For the most part, the drone was intact, he said in the video description. The drone owner did contact Apple, but there's no word on how that conversation is going. It probably started something like this: "Hey, yeah, I crashed my drone on your solar roof. Can I have it back, pretty please?" Watch the drone crash and the moment it was found below. https://www.youtube.com/watch?v=h7NFnJDcb50 Crashing your drone sucks. Crashing your drone and not knowing where, exactly it is really sucks. I'm glad the drone's been found, but only time will tell if the it's returned to its owner. This isn't the first time that a drone's helped find another drone. Watch how one guy channeled MacGyver to rescue his roommates drone.