94. Triumph of the Bionic Limbs

Engineers have successfully integrated machines with the human body. 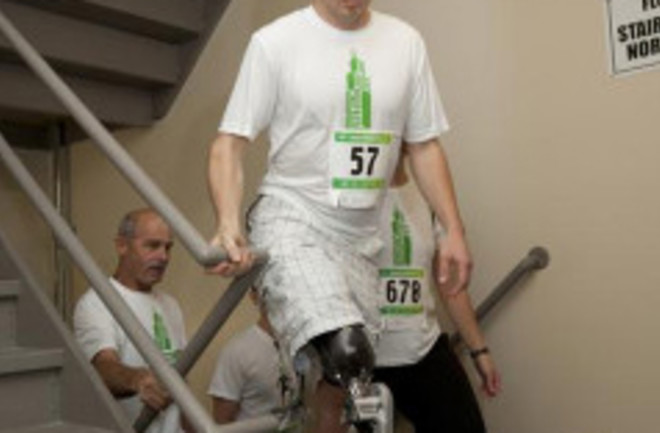 Zac Vawter uses his thoughts to control a bionic leg up 103 flights of stairs. | Rehabilitation Institute of Chicago

In August Oscar Pistorius, a South African double amputee, sprinted into the 400-meter semifinals—and into Olympic history—on carbon-fiber feet. In November Zac Vawter climbed to the top of Chicago’s Willis Tower (formerly the Sears Tower) on a bionic leg controlled by his thoughts.

The events were triumphs for both the athletes and the army of prosthetics engineers working behind the scenes. Pistorius’s feet were so effective that some questioned whether they provided an unfair advantage on the track. The prosthetic worn by Vawter, a software engineer, has even bigger implications for commonplace amputee challenges like walking up hills and stairs.

After losing his right leg in a motorcycle accident, Vawter underwent an experimental technique called targeted muscle reinnervation. Stray ends of nerves at the amputation site were redirected into muscle elsewhere in the leg. When his brain sends messages down those nerves, the muscles contract, amplifying the signal. Engineers at the Rehabilitation Institute of Chicago put electrodes on Vawter’s thigh to detect the contractions and used a computer chip to translate them into commands for his motorized prosthetic.

“We learned what patterns look like when Zac wants to bend his knee or climb the stairs,” explains lead scientist Levi Hargrove.

As machines become better integrated with the human body, we are glimpsing a future without disabilities, says Hugh Herr, a pioneering prosthetics researcher at MIT: “Society should begin to question social norms that label amputees as disabled.”