Like the Terminator T-1000, these robots can fix themselves after being scattered. 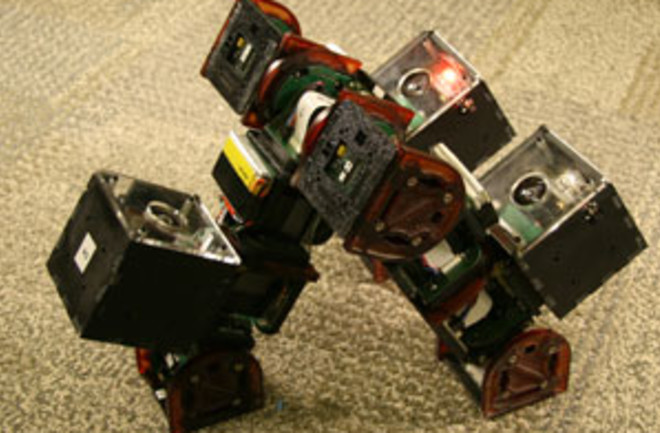 There is more to the ckBot than meets the eye. This aggregation of 15 blocks moves with the grace of a toddler and looks like something designed by a 2-year-old. But when ckBot’s creator, Mark Yim, gives it a swift kick, sending the pieces flying apart, the robot does something remarkable. The scattered modules flip over and wriggle toward each other, guided by cameras and internal sensors. When the blocks make contact, they magnetically latch together and—in an action eerily reminiscent of the liquid metal T-1000 cyborg in Terminator 2—reassemble themselves in their original form.

Yim, a mechanical engineering professor at the GRASP lab at the University of Pennsylvania, says that his robot is one of the first fully active prototypes of a new kind of machine composed of what some researchers call smart matter: mechanical parts that can function independently and act cooperatively. One of the obvious applications of such research is military. The Defense Advanced Research Projects Agency, an arm of the U.S. Department of Defense, is exploring how to endow robots and other military equipment with the self-sufficiency to function independently amid the explosions and changing landscapes of a war zone.