7-Eleven Drone Deliveries to Rise in 2017 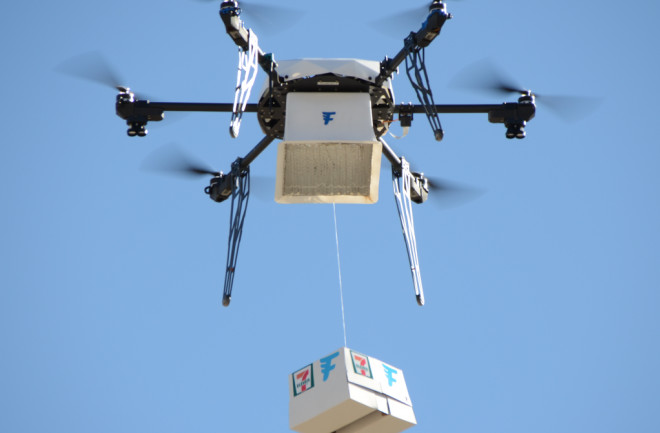 A Flirtey delivery drone carries an order from a 7-Eleven store in Reno, Nevada. Credit: Flirtey A dozen lucky 7-Eleven customers have already gotten to taste the possibilities of drone food delivery in Reno, Nevada. In November 2016, these customers experienced the futuristic thrill of placing 7-Eleven orders through an app and then watching a hovering delivery drone drop off their order within 10 minutes. Next year, 7-Eleven plans to expand on such drone deliveries in partnership with a company calling itself the "Uber of drone delivery." That self-proclaimed "Uber of drone delivery" is not a tech giant such as Amazon or Google, but a delivery drone startup called Flirtey. The startup aims to beat its bigger rivals to the punch by working closely with regulators and large companies around the world to expand its early foothold in the drone delivery market. In the long term, Flirtey is betting that its delivery drones can deliver more convenience at a similar price point as traditional drones. "Flirtey's pricing is comparable to current last-mile delivery services," says Matt Sweeney, CEO of Flirtey. "So Flirtey is a faster and more convenient service at a price point competitive with traditional delivery prices." The idea of making drone deliveries as cheap for customers as traditional delivery services is easier said than done. Delivery drones also face certain hurdles in making successful deliveries to customers spread across a wide delivery area on a timely schedule. For example, most smaller drones have a fairly limited range before they need to land and recharge their batteries. Delivering packages to homes or businesses surrounded by tall trees and power lines also poses its own challenge. But the challenges of making drone deliveries viable have not stopped Flirtey from trying. An initial 7-Eleven delivery test took place in July. And just as the latest slew of 7-Eleven delivery tests were taking place in November, Flirtey also officially kicked off drone pizza deliveries with Domino's Pizza in New Zealand. Sweeney pointed to the 7-Eleven tests in particular as providing valuable experience for the delivery drones in navigating a suburban setting:

Our first month of routine deliveries was a huge success. We delivered in a suburban environment—including crossing roads with traffic—from an active store to homes in a neighborhood which includes trees and power lines. All orders were placed on-demand, not predetermined, and filled within minutes.

Even after placing their orders on the custom app, customers received notifications about when the drones were loaded, when they had departed from the 7-Eleven store and when they were arriving on their doorstep to lower the package via cable. The weekend deliveries from the 7-Eleven store during November seemed to satisfy the first dozen customers: All of them said they would continue using the Flirtey drone delivery service. It's tempting to imagine delivery drones flying Slurpee drinks, sandwiches, donuts or hot coffee to many more customers in the near future. But Flirtey has placed special emphasis on over-the-counter medicine delivery to spare parents of sick children the inconvenience of running to the store for flu or fever medication. The startup and 7-Eleven plan on growing the delivery drone service at the Reno store and perhaps beyond in 2017. "In addition to these commercial deliveries, Flirtey and 7-Eleven are planning to expand our drone delivery operations in 2017, and we will expand operations as quickly and safely as possible," Sweeney says.