7. Debut of the Mind-Controlled Robots 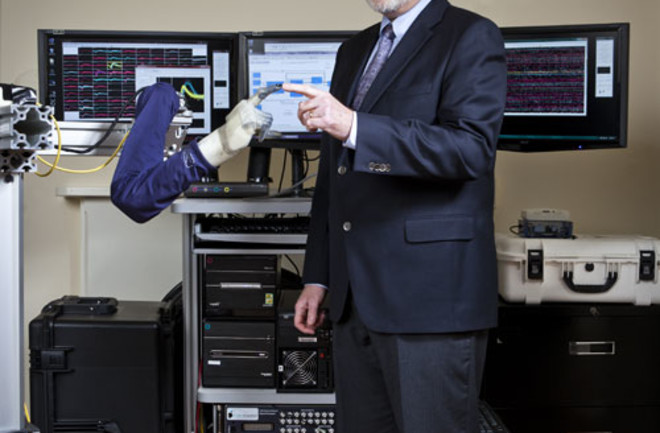 Donoghue poses with his robotic arm. The brain implant he designed draws signals out of a patient's head and uses them to guide the arm. | Jesse Burke

John Donoghue, the director of the Institute for Brain Science at Brown University, could not contain his excitement. For years he had been working on a revolutionary method to pick up brain signals from paralyzed patients and translate them into commands to move mechanical limbs. If all went well in this experiment, Cathy Hutchinson, a 58-year-old woman who lost the use of her limbs in a stroke, would control a robotic arm and hand and use them to lift a bottle of coffee to her mouth—just by thinking. "Guys," Donoghue told his collaborators, "buy the most expensive camera we can afford and shoot this in high-definition. This is a historic moment."

And so it was. Hutchinson sipped coffee from a bottle, the first time she had served herself in 14 years and the first time a person had ever guided a robotic limb with her thoughts. The achievement was reported in a May 2012 Nature article.

In a sense Donoghue, 63, has been building up to this moment all his life. As a child, he suffered from Leggs-Calvé-Perthes disease, which prevented him from walking for two years. In his first job after college, he worked at the Walter E. Fernald State School, an institution for the mentally handicapped. "I was looking at brains in the lab and then looking out the window at people who had brain diseases that completely took away their humanity, their ability to interact," he says. "I've been trying to understand what the brain is doing because to me the brain is the organ of our humanity. It gives us our mental life, and that makes us what we are." DISCOVER senior editor Kevin Berger spoke with Donoghue in his Brown University office.

You have found a way to help paralyzed people by converting brain signals into computer code to maneuver a robotic arm. How does that work?

Neurons in the brain create electric signals. When the neurons are sufficiently tickled by inputs, they fire electrical impulses called spikes. We have a simple tool to record those spikes, the microelectrode, which has been around since the 1930s. EEG [electroencephalography] electrodes record the neurons' activity from outside the head or on top of the cortex, but the resolution is blurry. It’s sort of like listening from the Goodyear blimp to a crowd in the sports stadium. You need to drop the microphone right next to people's mouths to really hear them.

So you created that neural microphone—a silicon chip with 100 electrodes implanted in the brain—and connected it with wires to a computer. Then what do you do?

Once I have the microelectrode array in your motor cortex, the brain's command center for movement, you watch a cursor on a video moving left and right. I then say, "Imagine you’re doing that by moving your hand on a mouse." As you imagine doing this, and the cursor moves to the right, I record the number of spikes, and it's five. And when the cursor moves to the left, it’s two. So now I have a coding model. Five means right, two means left.

You can tell what I want to do by recording a single neuron? But we have 100 billion neurons in our brain!

That's what's so remarkable. The brain operates over broad networks. There's a tendency to think you've got one neuron that’s saying "left." But if that one cell dies, it doesn’t make any difference, because the message is distributed over many neurons. Of the many million neurons in the motor cortex, most of them have some kind of information about leftness. Now, the code for a single neuron is not so simple. Sometimes imagining left might produce two spikes, sometimes four. It's variable. So we average a set of neurons together. With [my patient] Cathy, we were using a few dozen neurons, and the computer decoded the likelihood that they were signaling "go left" or "go right."

How does that code then tell the robotic arm what to do?

The signal comes out of the computer, and it's converted into electronic commands that the robot arm understands as: move a little bit forward, back, up, down, go left, go right, or open or close the hand.

That process sounds almost magical, controlling a device with your thoughts. But the process wasn't instant or intuitive; you needed the prerecorded sessions with Cathy Hutchinson to establish a map of her brain signals for the computer, right?

Right. We play all the data through the computer, and it gives the commands. Virtually 100 percent of people who hear Cathy's story for the first time think that she’s learning how to control a cursor or robotic arm. In reality, she doesn't learn anything. She tries to control the arm by imagining she's controlling it. And we use the neural data from her brain and the map of her brain signals we've generated to understand what she's trying to do and make that happen.

Does that mean we are safe from thought police hacking into our brains to detect whether we're about to commit a crime?

I don't think we can go there. But what might happen is that we could address schizophrenia, depression, or other psychiatric diseases. I could imagine that with an electrode array in the right location in the brain, we might learn to understand the differences in neuronal spiking between normal and aberrant brains. It may be that a disease forms aberrant patterns, and those patterns lead to the psychosis. This is a little bit sci-fi, but it's in the realm of things that could be done. Imagine you could deliver medication to the site in the brain when it's upset. With hair-thin electrodes, it is now possible to put a pump on the side of them and deliver drugs to the site when there is aberrant activity, quiet it down.

You have said that your system could eventually be wireless, with implants transmitting signals to a wearable device that would steer the robotic limbs. Could paralyzed people then walk again, using an exoskeleton frame?

Technically, yes, but we don't know a lot yet about the source of leg signals. And the problem of walking is much harder. You have to coordinate both limbs and balance. Another complication is the cosmetic factor. Christopher Reeve once said, "I don’t want to look like a robot." That goes for nearly everybody who is disabled. Also, today's wheelchairs are pretty good. So our focus is the arms. If you can't move your arms, it is extraordinarily debilitating. We want to give paralyzed people back something that is extremely liberating.