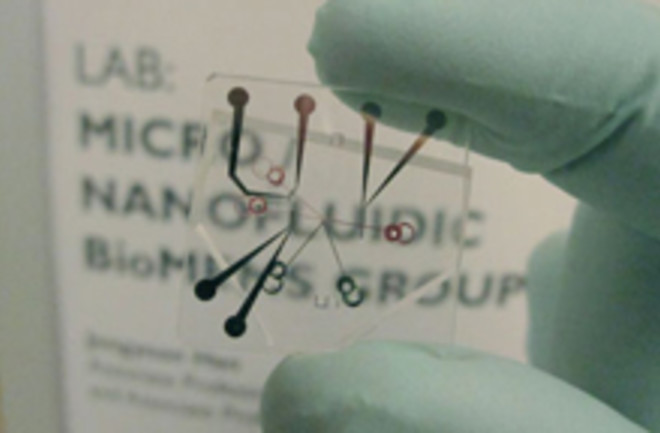 So far in 2010 we've seen nanotubes that carry thermopower waves to create electricity, nanoparticles that latch onto only damaged cells to deliver drugs there, and more. Today there are a couple more clever uses for nanotechnology—taking the salt out of salt water, and nanobots that deliver gene therapy. In Nature Nanotechnology, an MIT team showed they could use nanotech to desalinate water in a new way. At the moment, desalination plants employ reverse osmosis, in which pressure forces the salt ions through a membrane.

But this process is an energy-gobbler and the membrane is prone to clogging, which means that de-sal plants are inevitably big, expensive, fixed pieces of kit [Sydney Morning Herald]

. Instead of reverse osmosis, the MIT project uses ion channel polarization: As water flows through a channel, membranes that are ion-selective separate not only salt ions from the water, but also viruses and microorganisms. But this process actually pushes those things away from the membrane, the researchers say, which is why the membrane doesn't have the same salt buildup or bacteria fouling problems as reverse osmosis desalination plants. Project head Sung Jae Kim says the prototype wafer (pictured) produced for the water project is simply a proof of concept at this point. The team dreams of using the nanotech process to create portable water desalination devices that could run on solar power, but it won't be easy.

. Meanwhile, across the country at Caltech, another group of researchers is taking nanotech straight to the genes. In a study in Nature, the researchers describe their polymer nanobots that deliver strands of RNA to tumor cells.

Once the particles find the cancer cell and get inside, they break down, releasing small interfering RNAs or siRNAs that block a gene that makes a cancer growth protein called ribonucleotide reductase [Reuters]

. The researchers hypothesized that this RNA interference would keep the tumor cells from multiplying. Mark Davis and colleagues conducted phase 1 clinical trials with 15 melanoma patients, three of whom volunteered tumor samples. At least one of the patients showed lower levels of the cancer growth protein after treatment, and

patients who were given higher doses had higher levels of siRNA in their tumours. "The more we put in, the more ends up where they are supposed to be, in tumour cells," Davis says [Nature News]

. This was also a proof of principle experiment to establish that the RNA delivery system worked, the researchers say, but much more work has to be done to determine whether the treatment is safe, and whether it really does improve patient outcomes. Related Content: 80beats: New Nanoparticles Act Like Burrs to Target & Latch Onto Damaged Cells 80beats: Golden Nanocages Could Deliver Cancer Drugs to Tumors 80beats: Nanoparticle “Smart Bomb” Could Stop Cancer’s Spread 80beats: San Diego Residents Will Soon Be Drinking Desalinated Water DISCOVER: Water, Water Everywhere, So Let's All Have a Drink DISCOVER: 9 Ways Carbon Nanotubes Just Might Rock the WorldImage: Sung Jae Kim/Jongyoon Han, MIT