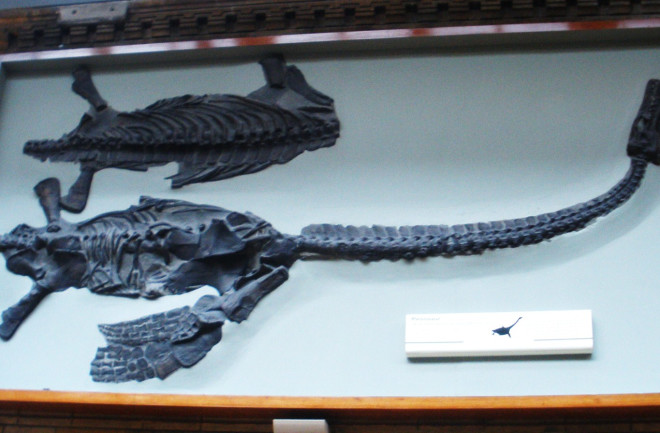 A cast of Attenborosaurus conybeari at the Natural History Museum in London. (Credit: Wikimedia Commons)

We're teetering on the brink of a new year, and in the spirit of fresh beginnings I'd like to introduce you to Attenborosaurus conybeari.

It's an Attenborosaurus (yes, you can call it that) but we once called it a plesiosaur because it looked so similar to the ancient marine reptiles. A long neck, sharp teeth, four big flippers and a round body were all that it took to get into the plesiosaur club back in the day, apparently.

But today, the rules have tightened considerably. Paleontologist Peter Bakker took a good, long look at Attenborosaurus in 1993 and decided that it was different enough to warrant its own genus. (A note for people who read a lot of Wikipedia — yes it's still in the Order Plesiosauria, and you could technically still call it a plesiosaur.)

The species name already honored one William Conybeare, a geologist known for his work with marine fossils, so Attenborough snagged his first genus, and the one-time Plesiosaurus got a new name.

And he was pretty stoked about it, too. In a 2015 Washington Post interview, Attenborough named the Attenborosaurus as his favorite namesake species, in large part because the entire genus bears his name.

Sadly, the original skeleton, the only one ever found, was destroyed during World War II by Nazi bombs. Thankfully, a plaster cast of the bones survives — you can see Sir David hanging out with it here.

The skeleton was a pretty good find, too. It was almost complete, and impressions of the reptile's skin indicated a smooth membrane, as opposed to scales. That likely helped it to swim faster in prehistoric seas, where it would snap up fish with the help of its long neck.

We'll never get to see Attenborough meet Attenborosaurus, unfortunately, so we'll just have to imagine it. Maybe it would go like this: