Your Genome Is Sex-Biased

Researchers find a full 12,000 genes that act differently in male and female mice, a finding that could lead to sex-specific medicine. 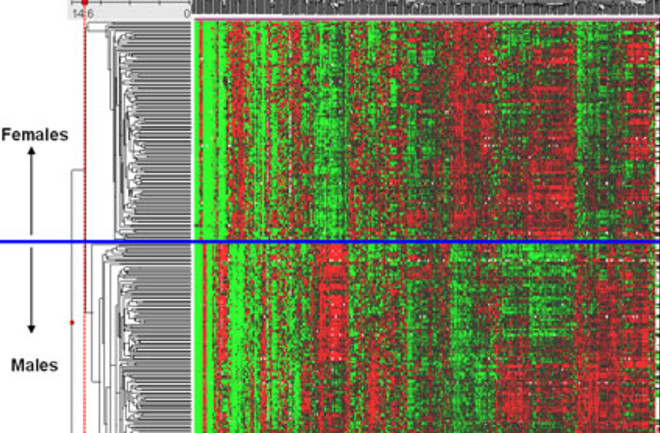 The map shows how genes are expressed in the livers of female (top) versus male mice. Red corresponds to more gene expression, green to less.

Genetic sex differences go way beyond the X and Y chromosomes, says UCLA geneticist Thomas Drake. In fact, thanks to Drake's team, researchers are now more than 12,000 steps closer to understanding the differences between males and females: That's the number of genes Drake's team found behaving differently in the brain, liver, fat, and muscle tissues of male and female mice.

Researchers have long known that a small fraction of genes are more active in one sex than in the other. So when Drake and his colleagues measured the RNA levels—a direct link to how much of a gene is being produced—in the genes of 334 mice, he didn't expect to find more than a few variations that might help explain why males and females have such different rates of cardiovascular disease and diabetes or why they react differently to certain drugs.

Instead he found a genome-wide divide, with some genes churning out a staggering 300 percent more of their product, depending on whether they were in males or females.

Sex hormones may have a ripple effect on many other genes, Drake suggests, noting that those involved in specialized, as opposed to simply structural, functions were more likely to differ between males and females.

Regardless of why that is so, the work could herald a new era of sex-specific medicine. "One can measure by this method the features that make men and women more or less susceptible to drugs or disease," Drake says.