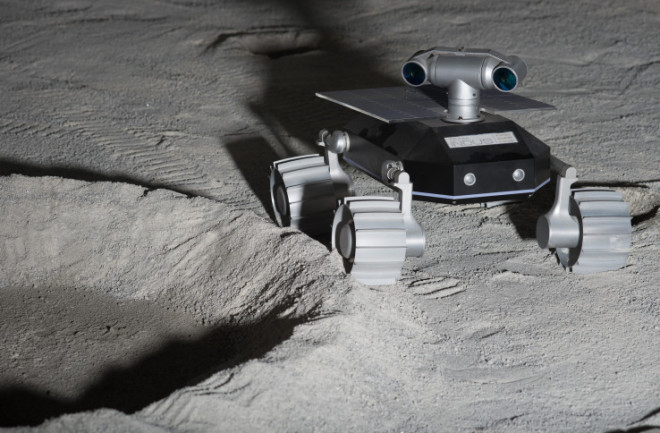 The TeamIndus rover. (Credit: TeamIndus) A team of undergraduate engineers from the University of California-San Diego hopes to be the first to brew beer in space. They are one of 25 teams competing for a spot aboard India's TeamIndus lunar lander mission, which itself is vying for a $20 million Google Lunar XPRIZE. Inspired by home brewing projects, the young engineers want to study how yeast behaves in outer space.

Their experiment consists of a soda-can sized container, which would hold wort (a sugary extraction that is the precursor to beer), sugar water and yeast in separate compartments. When (and if) the TeamIndus lander touches down on the lunar surface, the water, yeast and wort would be combined, beginning the fermentation process and perhaps crafting the first lunar lager. They plan to monitor the beer's progress using pressure, instead of density like we do here, and would convert the CO2 produced during the fermentation process directly into carbonation, to avoid contaminating the spacecraft.

UCSD engineering students Johnny Koo, Jared Buchanan, Han Lu Ling, Neeki Ashari, Srivaths Kalyan, and Tavish Traut. (Credit: Erik Jepsen/UC San Diego Publications) The project, dubbed "Team Original Gravity" is meant to do more than just bring alcoholic beverages to space. The team says their ultimate goal is to determine if yeast remains viable in space. In addition to fermenting beer, the microorganisms could be used to help plants grow and synthesize drugs and other painkillers — all necessary tasks for future, off-world colonization efforts. Of course, including beer on the menu wouldn't hurt either.

The team's project was entered into the lab2moon competition sponsored by TeamIndus — one of five groups still in contention for the Lunar XPRIZE. TeamIndus plans to include an experiment that tests technologies vital to establishing an extraterrestrial colony from scientists and engineers under 25. The UCSD students are among the finalists in the competition, and have been invited to send a prototype of their experiment for consideration. While the engineering students are working on their lunar brewery, TeamIndus will be finalizing plans for their lander and moon rover, which must launch before December 31, 2017 to be eligible for the prize. The group has already secured a launch contract with the Indian Space Research Organisation, and is the only Indian team still in the race. To win, they must be the first team to successfully land on the moon, deploy a rover that travels at least 500 meters and sends back high-definition video and images. And, if Team Original Gravity is chosen, they may even be able to celebrate in style.