You Know What They Say About Male Beetles With Long Horns… 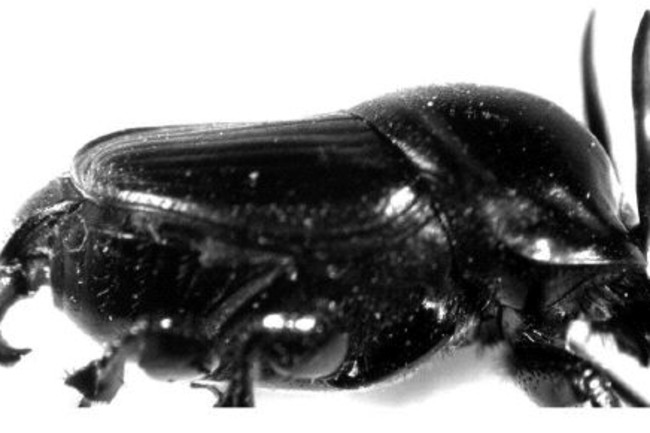 Sometimes when you take a look at life on Earth, it seems like evolution might be able to produce anything you could ever imagine. Can a mammal become so adapted to swimming in the ocean that it never comes back on dry land? Check. Can a squid evolve eyes as big as dinner plates? Check. Can a mole evolve a nose that acts like a hand? Check. But what about the fact that no ape has ever grown antlers? Or that no bird has ever reached a fifty foot wingspan? Or that, so far as anyone can tell, no animal has acquired hydrogen-producing bacteria in its gut and floated off like an airborne balloon? Are these dreams beyond the limits of evolution? If they are, where do you draw the border of the possible and the impossible? These sorts questions are easy to come up with, but they rarely come in a form that allows for a scientific answer. But for some years now, Frederik Nijhout of Duke University has been able to test the limits of evolution by experimenting with horned scarab beetles (Onthophagus taurus). The male beetles grow long horns that they use to compete over females. The horns are wonderfully long, and males with longer horns seem to have an edge over those with shorter ones. (Insert your size-comparison joke here.) Is there a limit to how long the horns can get? One limit emerges from how the beetle develops. A horn is the result of a tiny patch of cells in a beetle larva multiplying like mad. They need energy to do this, and the more energy they consume, the less may be available for neighboring cells. In the late 1990s Nijhout found that beetle horns are in an embryonic competition with beetle mandibles, which grow from cells right next to the cells destined to become horns. When he inhibited the growth of horns, beetles grew bigger mandibles, and vice-versa. Mutations that produce bigger horns run the risk of leaving a beetle with smaller mandibles, which would make it harder for the insect to eat enough to survive. Now Nijhout has discovered that this competition is far more widespread than he initially thought. In a paper to be published in the February 2004 American Naturalist (full text here), he and Armin Moczek looked at the development of horns versus the development of another appendage essential to a male beetle--his genitalia. Unlike mandibles, however, a beetle's privates are far from its horn--in fact, on the other side of its body. Yet Nijhout and Moczek found that when they destroyed the cells destined to become the genitalia, the beetles grew horns that were on average 26% longer than on beetles on which they performed a sham surgery (cutting them open but leaving the genital cells unmolested). The scientists point out that insect cells need more than just energy to grow--they are controlled by hormones and other regulating molecules. These molecules course throughout the body, and so a greedy organ in one part of the body may be able to stunt the growth of another one far away. Insects may be particularly vulnerable to this sort of constraint, because their adult body takes form very quickly as a larva goes through metamorphosis. It turns out that only some male horned scarab beetles grow long horns and battle for mates. Others grow to only small sizes as adults and don't grow any horn at all. Rather than fight the big males, they sneak around, trying to grab a female on the sly. Freed from the burden of a big horn, they seem to have channeled their resources into their genitalia. Their genitals are bigger than those of the horned males, and their sperm is superior as well. The horned scarabs beetles may not be able to escape their evolutionary constraint, it seems, but they certainly can do a good job of exploring the possibilities those constraints allow them. Exactly what the horned scarab beetles have to say about men with big feet, however, remains for future scientists to determine.