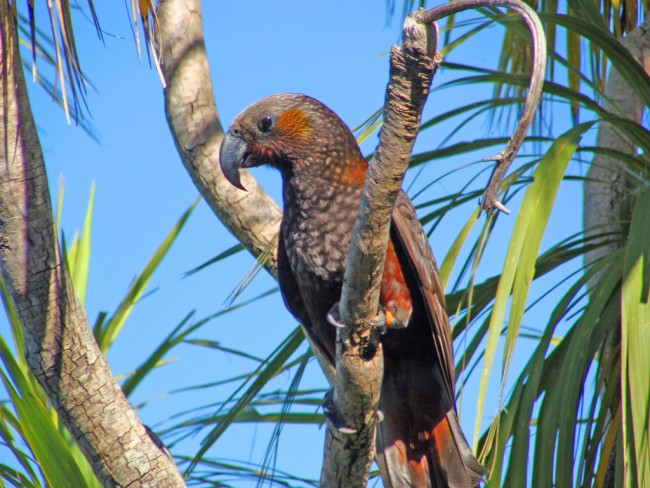 Like Snapchat abstainers or reluctant Slack users, adult parrots have a hard time learning new tricks. Older birds stay set in their ways while young birds innovate and try new things. Researchers say that's just as it should be—even if it means the grownups miss out on a treat now and then. Young animals might be better at creative problem-solving because they're fearless and like to explore. On the other hand (or paw, or claw), older animals might do better because they have more knowledge and life experience to help them. Studies in monkeys and apes have suggested that adults are the better innovators. But a few studies in birds have found the opposite: juveniles outperform adults at solving problems. To shed some more light on the question, Julia Loepelt and her colleagues at the University of Wellington in New Zealand looked at a wild parrot called the kaka. The scientists studied birds in a New Zealand wildlife sanctuary called Zealandia. Since all the kakas in the sanctuary get bands put on their legs when they hatch, the scientists knew the age of every bird they saw. They set up three different experiments at the platforms where the kakas usually feed. These feeding platforms hold little steel boxes filled with parrot pellets. Ordinarily, the birds can access the pellets by stepping on a lever to open the box's lid. In one experiment, researchers wedged a wooden block under the foot lever. Birds couldn't open the box unless they diagnosed the problem and pulled the block free. (The researchers used cashews instead of parrot pellets to make these experiments more enticing.) In a second experiment, the researchers removed the foot lever altogether. Now, to get food, a bird had to lift the box's lid with its beak. The third experiment didn't use the metal feeding boxes at all. Instead, researchers attached a wooden dowel to a branch near a feeding station. They tied a long string to the dowel and attached a cashew to the end of it. To get the nut, a bird had to perch on the dowel, reach down, and hoist the string up bit by bit. 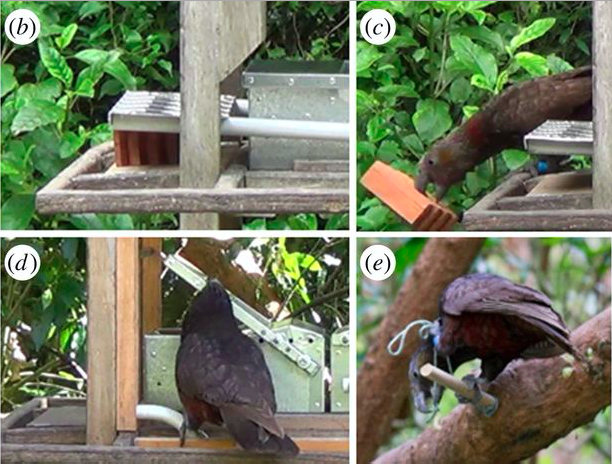 Photo (b) shows the foot pedal with a wooden block underneath; in (c), a kaka is (triumphantly?) removing the block. In (d), a bird lifts the lid in the second experimental setup. The bird in (e) is dominating the dowel-on-a-string experiment. The researchers set up their tests and watched over several months as kakas came to visit. They filmed 104 birds trying out the experimental setups, ranging from four months to 13 years old. Twenty-four birds tried all three experiments. Young parrots dramatically outperformed their elders. Juvenile kakas (those under one year old) had the highest success rate at getting cashews, across all three setups. They also spent less time solving the puzzles than older birds did, and used a wider variety of behaviors while they were trying to find the answers. Out of seven adult birds that did all three experiments, not a single one got the block out from under the foot pedal. "Sub-adult" birds (1-4 years old) did just about as badly as the oldest birds. Loepelt and her coauthors speculate that young parrots performed best because they're more flexible in their behavior. This could be a useful trait while birds are still learning the best ways to survive and find food. Once they get older, they may settle into behaviors that work, and become less flexible. That could explain why adult birds did better at the string-pulling task than the other two setups. When the researchers tweaked the feeding boxes that adult birds were already used to seeing, these birds couldn't change their habits to get the boxes open. ("Why should I use my beak? I've been opening this thing with my foot for years!") But the dowel-and-string setup was totally new, so the adult birds weren't already stuck in a behavioral rut. They could try different ways to solve the puzzle—and a few of them even solved it. There may be hope, then, for all the thirty-somethings who still haven't signed up for Snapchat. (But could someone please invent SnapCashew instead?)