There's a certain kind of headline I have become sick of: "Scientists Have Sequenced the Genome of Species X!" 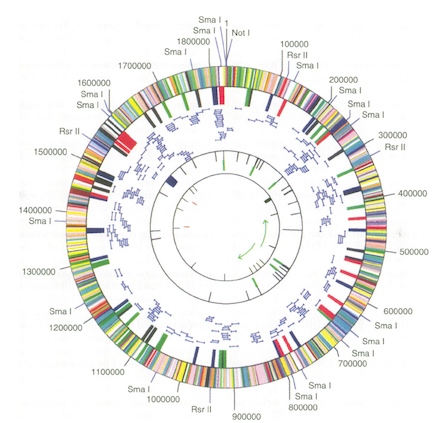 Fifteen years ago, things were different. In 1995, scientists published the first complete genome of a free-living organisms ever--that of a nasty germ called Haemophilus influenzae. Bear in mind, this was in the dark ages of the twentieth century, when a scientist might spend a decade trying to decipher the sequence of a single gene. And then, with a giant thwomp, a team of scientists dropped not just one gene, but 1740 genes, spelled out across 1.8 million base pairs of DNA. At the core of the paper was an image of the entire genome, a kaleidoscopic wheel marking all the genes that it takes to be H. influenzae. It had a hypnotizing effect, like a genomic mandala. Looking at it, you knew that biology would never be the same. Looking over that paper today, I'm struck by what a catalog it is. The authors listed every gene and sorted them by their likely function. They didn't find a lot of big surprises about H. influenzae itself. It had genes for metabolism, they reported, and genes for attaching to host cells, and for sensing the environment. But scientists already knew that. What was remarkable was the simple fact that scientists could now sequence so much DNA in so little time. Then came more microbes. Then, ten years ago this coming June, came a rough draft of the human genome. Then finished drafts of other animals: chickens, mice, flies, worms. Flowers, truffles, and malaria-causing parasites. They came faster and faster, cheaper and cheaper. The acceleration now means that the simple accomplishment of sequencing a genome is no longer news. 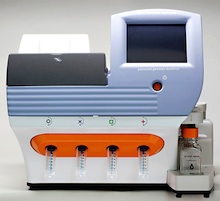 On Wednesday I caught a talk at Yale by Jonathan Rothberg, a scientist who invented "next-generation sequencing" in 2005. By sequencing vast numbers of DNA fragments at once, the new technology made it possible to get a genome's sequence far faster than earlier methods. Rothberg's company, 454, got bought up by Roche, leaving him without a lot to do. So he came up with a new machine: a genome sequencer about the size of a desktop printer that can knock out complete genomes with high accuracy in a matter of hours. Rothberg has been unveiling details of the machine over the past few weeks. To convince his audience that the machine actually works, he flashed another mandala wheel--the 4.7 million base pairs of E. coli. I recalled when the first E. coli genome was published in 1997. It was the result of years of work by 17 co-authors, an event celebrated in newspapers. Now Rothberg just threw up a quick slide of the germ's genome just to show what he could do in a matter of hours. And I have to say that the sight of yet another circular map of a genome, on its own, no longer gave me a thrill. It's a bit like someone waving you over to a telescope and saying, "Look! I found a star!" What remains truly exciting is the kind of research starts after the genomes are sequenced: discovering what genes do, mapping out the networks in which genes cooperate, and reconstructing the deep history of life. Thanks to the hundreds of genomes of microbes scientists can now compare, for example, they can see how the history of life is, in some ways, more like a web than a tree. Insights like these are newsworthy. The sequencing of those genomes, on its own, is not. And yet my email inbox still gets overwhelmed with press releases about the next new genome sequence. The press releases typically read like this: "Scientists have sequenced the genome of species X. Their research, published today in the Journal of Terribly Important Studies, will lead to new insights about this important species. Maybe it will even cure cancer or eliminate world hunger!" And then those press releases give rise to news articles. Here 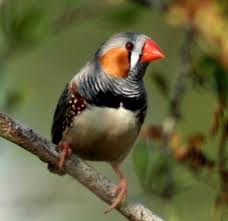 are dozens of pieces that came out over the past couple days, describing the freshly-sequenced genome of the zebra finch. What did the scientists actually learn about zebra finches through this exercise? The articles typically referred to 800 genes involved in the birds learning how to sing. Of course, nobody seriously would expect them to use just one or two genes for something so complex, so this was no big surprise. The articles also mentioned that a lot of the genes were similar to human language genes. This is not really news, either. For the most part, the articles look to the future--to experiments that scientists will be able to do on zebra finches, in the hopes of learning about human speech. But that's not news of an achievement--that's a promise. Perhaps press release writers and journalists are still operating on the assumption that any new genome is news. But that assumption has been wrong for years now. Let's wait to see what scientists actually discover in those marvelous mandalas. [Update: Thanks to Jonathan Eisen for coining the easy-t0-remember acronym for my current disorder: YAGS. That goes into my personal lexicon right away.]