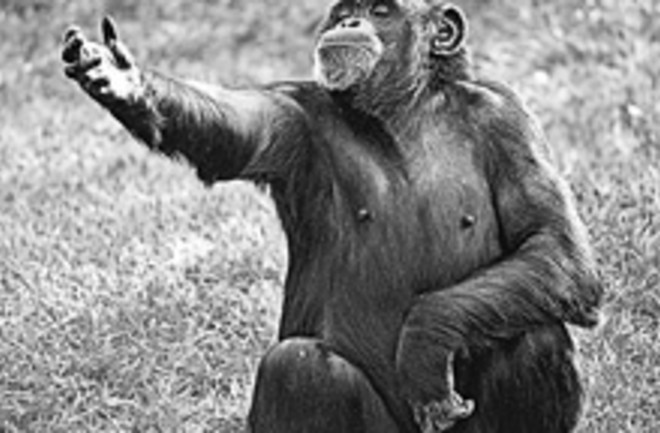 In a new study in yesterday's edition of the journal Nature, researchers analyze the speech-connected gene called FOXP2—both in the variant found in we talkative humans and that found in our close relatives the chimpanzees, who despite great genetic similarity to us are not a linguistic bunch. The team notes that only two amino acids separate the human and chimp versions. So a post over at io9 came out with the headline, "One Gene Tweak Could Make Chimps Talk." It has a nice poetic ring to it, and we can understand why a sci-fi blog would theorize that tinkering with this important gene could turn our fair home into Planet of the Apes. But we have to play the fun police on this one: The headline is just so wrong. FOXP2 certainly is important. The scientists say in the Nature study that "so far, the transcription factor FOXP2 (forkhead box P2) is the only gene implicated in Mendelian forms of human speech and language dysfunction." They say that scientists don't know for sure whether this two-amino-acid change in human FOXP2 occurred around the same time we developed language and is connected us beginning to talk, but their study teases the idea: "These data provide experimental support for the functional relevance of changes in FOXP2 that occur on the human lineage, highlighting specific pathways with direct consequences for human brain development and disease in the central nervous system (CNS)." But the fact that FOXP2 is connected with human language, and that chimps have a slightly different version of the gene, doesn't mean chips would start reciting Shakespeare if we swapped our version for theirs. For one thing, there are unavoidable physical differences in the voicebox and the size (and non-speech functions) of the brain. And FOXP2 isn't "The Speech Gene." Rather, it exerts some control over a series of other genes that all work in concert—at least 116 of them in humans. The New York Times reports:

Several of the genes under FOXP2’s thumb show signs of having faced recent evolutionary pressure, meaning they were favored by natural selection. This suggests that the whole network of genes has evolved together in making language and speech a human faculty.

So talking chimps aren't coming just because of one genetic tweak. But maybe I'll move Planet of the Apes up to the top of my Netflix queue—original version, of course. Related Content: Discoblog: Chatty Chimps Use Human-Like Connection Center