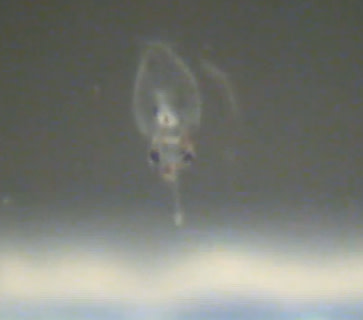 Learning to walk would be even harder if babies had to do it in jello. This is roughly the problem faced by young Humboldt squid. They start out life at one one-thousandth of their adult size and have to fight against the sticky water molecules surrounding them as they learn how to swim. They deal with it by sometimes swimming like jellyfish instead of squid (and hoping they survive long enough to grow). Danna Staaf and her colleagues at the Hopkins Marine Station of Stanford University studied the swimming styles of newly hatched Humboldt squid. With a mantle (the bell-shaped part) less than a millimeter long, these might be the tiniest squid in the sea. The researchers picked apart their subjects' swimming motions in high-speed videos, one frame at a time—sort of like a TV sports commentator analyzing Michael Phelps's backstroke, if Phelps quadrupled his number of arms and was transparent. Full-sized Humboldt squid have mantles of 1 meter (0.52 Michael Phelpses) or longer. They can hover, glide, or swim slowly by waving their fins and jetting water out of their mantles. Between jets they have to coast while their mantles refill with water. For a quick escape, they tuck their fins in close and shoot out an extra-strong jet. The babies have a shorter, stubbier shape than adults. Since they're so incredibly small, they're also prevented from swimming well by the viscosity of the water around them. "The tiniest baby squid are not very efficient swimmers," Staaf says. "They stop moving as soon as they stop jetting." When they weren't actively swimming, the researchers saw, baby squid always sank. You can watch a video here

of one young squid struggling to stay up. Unfortunately, a baby squid can't just give up on swimming and sit on the seafloor while it waits to grow. To avoid predators, it hangs out lower in the water during the day but rises to the surface at night. Moving at about half a centimeter per second, it has to allow some time for those daily journeys. (Later, as an adult, it will travel hundreds of meters up and down with ease.) To make up for their inefficient swimming, baby squid use a move called "hop and sink"—swimming upward for a few seconds, then resting and sinking back down. The researchers also saw them using a trick no one had ever seen before in squid

. Instead of tightly sealing the space between their mantles and their heads below, so they can use the water inside for jetting, they sometimes "leave the mantle open so lots of water leaks out," Staaf says. This "allows them to 'tread water' in a sense." It's more like how a jellyfish swims than an adult squid. It's possible that tiny baby squid use two different swimming styles (jellyfish-like and squid-like) simply "because their existence is so different from that of adults," Staaf says. Being so small gives them a whole different set of physical forces to contend with. As they grow, they ditch the jellyfish impression and perfect their speedy, adult jetting. Although newly hatched squid are inefficient swimmers, their efficiency peaks when they reach 1 centimeter (if they live that long). And as they grow from a centimeter to a meter or more, they're limited only by the power of their muscles to squeeze out jets of water. Then the ocean's other tiny inhabitants are the ones that have to watch out. 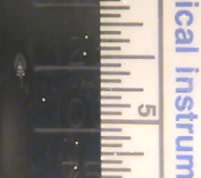