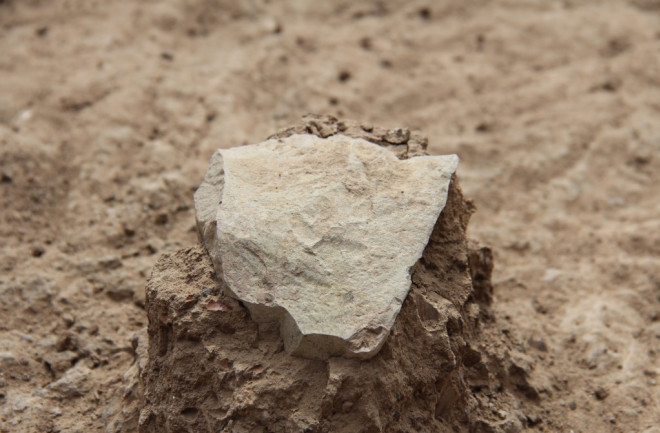 Tool unearthed at excavation site. Credit: MPK-WTAP This is an updated version of our post from April 2015. Archaeologists say they’ve unearthed the world’s oldest stone tools made by human ancestors at a dig site in Kenya. The set of 149 stone flakes, hammers and anvils, found off the shores of Lake Turkana, appears to have been crafted more than 3.3 million years ago — 500,000 years before our genus Homo, designating the first fully fledged humans, came to be. The implications, if the evidence holds up, will be far-reaching, since it has long been believed that tool-making was a skill exclusive to Homo.

When exactly humans started using tools is a hotly debated topic amongst archaeologists. Until this discovery, 2.6-million-year-old tools discovered in Ethiopia were considered the oldest in the world. That discovery fit neatly with the emergence of the Homo species, which was recently dated to 2.8 million years ago. In 2010, things got hairy. Archaeologists found cut marks in animal bones near the resting place of an australopithecine child — a species ancestral to the Homo genus. The team dated the cut marks back 3.4 million years, and argued that the marks were made by human forebears. Other researchers argued that the marks were the result of trampling by humans or animals. Now, as the authors report in Nature this week, there's sound evidence to support tool-making before the origins of Homo. Dating methods used on these stone tools indicate that they're 3.3 million years old, as the authors describe in The Conversation:

We dated the Lomekwi 3 tools by correlating the layers of rock in which they were discovered with well-known radiometrically dated tuffs, a type of porous rock formed from volcanic ash. We also could detect the paleomagnetism of the rocks, which in different periods of the past were either normal like today or reversed (the north magnetic pole was at the south pole). These are the standard ways fossils and sites from this time period are dated, and the hominin fossils found just 100 meters from our excavation were dated by another team to the same date.

Sonia Harmand and her team stumbled upon the ancient tools by accident. They were searching for the site where a controversial human relative, Kenyanthripos platyops, had been discovered in 1998. They took a wrong turn and found a different location with stone tools on the surface of a site called Lomekwi 3, the DailyMail reports. As they dug deeper, they found a series of sharp stone flakes that bore the telltale marks of intentional engineering. In all, they uncovered 20 well-preserved flakes, cores, anvils — used as a base to shape stones — and an additional 130 other tools. To make these tools, hominins would have needed a strong grip and good motor control, scientists said, providing potential insights into the physical capabilities of human ancestors. Harmand and her team, however, aren't finished yet. They write in The Conversation that even older tools likely remain to be discovered:

Of course, the most intriguing question is whether even older stone tools remain to be discovered. We have no doubt that these aren’t the very first tools that hominins made. The Lomekwi tools show that the knappers already had an understanding of how stones can be intentionally broken – beyond what the first hominin who accidentally hit two stones together and produced a sharp flake would have had. We think there are older, even more primitive artifacts out there, and we’re headed back out into the badlands of northern Kenya to look for them.