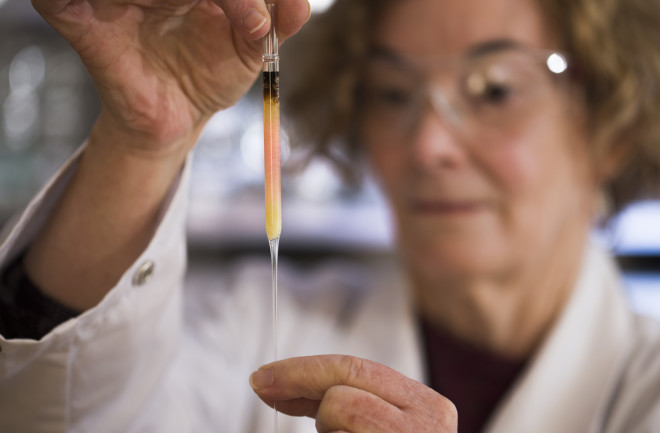 Biogeochemistry Lab Manager Janet Hope from the ANU Research School of Earth Sciences holds a vial of colored porphyrins (pink colored liquid), believed to be some of the oldest pigments in the world. (Credit: ANU) Bright pink 1.1-billion-year-old molecules from deep beneath the Sahara desert are now the oldest biological colors that scientists have discovered so far, and could shed light on why complex, multicellular life took so long to evolve on Earth. This discovery "really came as a fluke," said study senior author Jochen Brocks, a paleobiogeochemist at the Australian National University in Canberra. "About 10 years ago, a petroleum company looking for oil in the Sahara was exploring the black shales of the Taoudeni Basin in Mauritania when they hit upon something date 1.1 billion years in age. Our lab is renowned for analyzing the oldest molecules in the world, so they sent us a few samples to analyze." The scientists crushed the rock they were given to powder and suspended it within an organic solvent. "It was just like working with a coffee machine — instead of pumping water through a powder to get coffee, we ran a solvent through the rock powder to get a brown to black extract," Brocks said. This sample was unusually rich in carbon — "so rich and black that it would burn in an oven," Brocks said. When they separated the different molecules in the extract within a gel, study lead author Nur Gueneli screamed, came into the office, and showed Brocks that it wasn't just a typical brown or black oil at all, but had an amazing pink band in it.

The researchers had discovered ancient chlorophyll, the pigment that plants and other photosynthetic life use to convert sunlight into biological energy. The normal blue-green color of chlorophyll is due largely to magnesium, "which sits like a wobbly tooth in chlorophyll — it's not very stable inside," Brocks said. However, when an organism dies, other metals can replace this magnesium. "Every single black shale that can preserve these molecules has all sorts of heavy metals in it," Brocks said. "If that metal is nickel, the chlorophyll becomes blood-red; if vanadium, it becomes purple, and if that gets diluted, that's how you get pink." Until now, the oldest pigment molecules scientists had found were about 500 million years old. "This is older by about 600 million years," Brocks said. "These molecules are just exceedingly rare, and unlikely to find. We looked at just about every conceivable rock of this age before and found nothing. I'm not sure we're going to find anything older ever, and I'm not sure we're going to find any molecules filling in the gap between 500 million years ago and 1.1 billion years ago."

These molecules are more than just a pretty color — they are now also shedding light on ancient oceans. When the scientists analyzed these compounds, they discovered they were unusually rich in the isotope nitrogen-15. Isotopes of an element vary in how many neutrons they possess in their atomic nuclei — the most common nitrogen isotope, nitrogen-14, has seven neutrons in its nucleus, while nitrogen-15 has eight. Previous research found that different photosynthetic organisms consistently have different, specific levels of nitrogen-15 in their photosynthetic pigments. It remains a mystery why this is — "what we do know is that this suggests these pigments we found belonged to cyanobacteria and not algae," Brocks said. Cyanobacteria are microbes that were likely among the first photosynthetic life on Earth. They were later joined in ancient oceans by algae, which like plants and animals but unlike cyanobacteria are eukaryotes — that is, they have nuclei in their cells. The scientists found this sample was overwhelmingly cyanobacterial in nature. "That surprised me — it wasn't, like 50 percent cyanobacteria and 50 percent algae, it was really strongly cyanobacterial," Brocks said. The researchers also saw the sample had a dearth of molecules known as steranes that are typical of eukaryotes but not of bacteria. These findings suggest that about 1.1 billion years ago, Earth's oceans were dominated by cyanobacteria and not algae. "These ancient oceans were really bacterial oceans," Brocks said. "We do have eukaryotic fossils from this time, but ecologically, they were really unimportant."

The Mystery Of Complexity

As such, "the beautiful pink molecule could help answer a major question — why did large multicelullar complex animals on Earth take so long to develop?" Brocks said. "Earth is 4.6 billion years old, and it's well-established without a doubt it had life by 3.5 billion years, and it probably emerged earlier," Brocks said. "But the first complex multicellular creatures big enough to see with the eye did not emerge until about 600 million years ago. So why did it take about 3 billion years of evolution before something complex and multicellular emerged?" One possible explanation was that relatively large animals could not appear until large, nutritious photosynthetic microbes such as algae evolved. These animals then supported the evolution of carnivores that preyed on these herbivores, and life on Earth exploded with complexity. "These pigments we found suggested that at 1.1 billion years, there were no algae, only cyanobacteria, which supports the idea that animals could not exist in such oceans because the food sources were not sufficient," Brocks said. The scientists detailed their findings online July 9 in the Proceedings of the National Academy of Sciences.