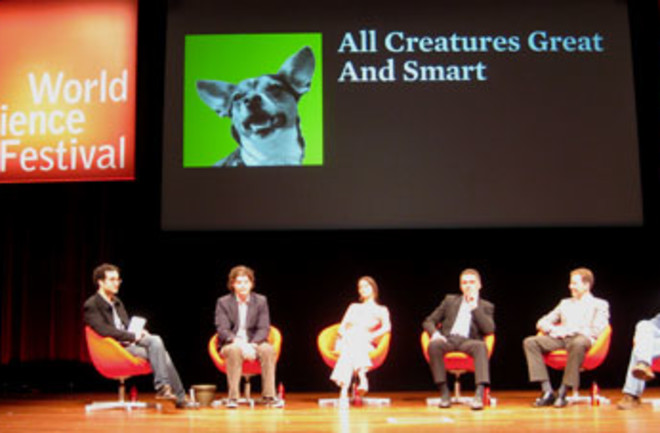 We’re not that special. At least, not for the reasons we thought we were. Our knack for acting altruistically, for communicating, for putting a complicated brain to good use: We’ve claimed all these as our own, as the things that set humans apart from every other species. But recently, science has shown that we have a lot more in common with other animals, from bonobos to bees, than you might expect. On Saturday, five researchers helped set the public record straight by busting up a few humanocentric myths during “All Creatures Great and Smart,” a panel event at the World Science Festival in New York. Myth #1: Humans are the only altruistic animals. From proffering a shovel in the sandbox to writing a check to our favorite charity, humans commit altruistic acts whenever they do something for someone else without any concrete benefit for themselves. But you can cross sharing off the “uniquely human” list; in a simple experiment, anthropologist Brian Hare demonstrated that bonobos do it, too. Alone in a room with some delectable snacks, each bonobo in the study had two choices: Enjoy the snacks on his own, or open a door to let another bonobo in an adjoining room come share the feast. Hare found that, time and again, bonobos in this situation chose to voluntarily share. “It could be that they feel bad for the other guy, or maybe they’re just being politicians,” sharing now with the expectation they’ll be shared with later, Hare said. “Or maybe they just want to go on a blind date.” The fact that altruism might come with an agenda doesn’t make the bonobos’ actions any less remarkable, Hare added. These same motivations prompt a lot of the sharing we do, too. Myth #2: Humans are the only true communicators. When scouting for potential dangers, monkeys in the rainforest go by the same rule people do: If you see something, say something. What’s more, what monkeys say depends on what exactly they see, said primatologist Klaus Zuberbühler. One alarm call signals “Oh no, a leopard!”, while another signals “Look out, an eagle!” It’s clear the calls mean different things because they don’t just sound different, they elicit different responses. Play a leopard alarm call, and a monkey will start peering down at the forest floor; play an eagle alarm call, and he’ll start scanning the skies. “Calling it a conversation might be too much,” Zuberbühler said, but monkeys can convey detailed information using their voices. Some animals can even dabble in the languages of other species. Hornbills, birds that live a safe distance off the ground, ignore monkeys’ leopard alarm calls, but they’ll flap their wings in panic when the monkeys say an eagle’s nearby. Myth #3: We can learn because of our big brains. Even insects, far from us on the evolutionary tree as they are, are capable of some surprising mental feats. Understanding how their neural circuits work and what they do can give us insight into the building blocks of our own brains and behavior. “Insects are incredibly sophisticated,” said insect neuroscientist Jeremy Niven. “When you see what they can do with their tiny brains, you wonder why we need an extra billion neurons or so.” -- by Valerie Ross Related Content: Discoblog: World Science Festival: Will Scientists Ever Know Everything? Discoblog: World Science Festival:Waiting for Einstein’s Gravity Waves Discoblog: World Science Festival: The Science of Star Trek Discoblog: World Science Festival: Telling Scary Stories of Strangelets Discoblog: World Science Festival: Listening to Illusions of Sound