Winter Postcard From Antarctica: Life on Ice at the British Halley Research Station

Back in February, I stumbled across a Tweet about a ‘not so nice day’ at the British Halley Research Station in Antarctica. It featured a photo of a person wearing ski goggles and a big puffy parka being pummeled by wind-blown snow standing in front of an intriguing structure in the background.

The link in the Tweet took me to an online diary by Tom Welsh, the wintertime station leader, with a series of fabulous photos. Here’s what he wrote in February’s post:

As I write this, I can see and hear most of the research station contingent heading outside. The reason for this is that the sun will set for the first time in a number of months tonight. After perpetual daylight, everyone here would really like to watch our 24-hour summer companion disappear. Even if he will return above the horizon 30 minutes later!

I found that quite intriguing, so I emailed Tom and asked if I could use some of his pictures. Not only did he say ‘yes,’ he went out shot some additional photos — just for ImaGeo. The image above is one of them, and I’ve gathered the others into a gallery, which you can find by scrolling down. The gallery includes some that Tom shot just a week or so ago, as winter was enveloping Halley and Antarctica overall.

He and the winter crew of 12 other people are now cut off from the outside world. As Tom put it in a recent email:

The 13 winter staff of the British Antarctic Survey research station, Halley VI, have just begun the adventure of a lifetime. On the 11th of March, at around 11:30am, the last of the summer staff flew out on a DC3 Basler, leaving the 13 of us to continue science and maintain the station infrastructure over the 8 months of winter.

More about what it’s like to winter over on an Antarctic ice shelf in a minute. But first some details about the station itself.

The Halley Research Station is sited on the Brunt Ice Shelf in east Antarctica. Click on the thumbnail image at right for a Envisat radar image, acquired on March 5th, 2011, featuring the Brunt Ice Shelf/Stancomb-Wills Ice Tongue system.

Here are some details about the station from the British Antarctic Survey:

Halley VI Research Station is the first fully re-locatable research station in the world. It was commissioned in 2006 and its unique and innovative structure was the result of an international design competition in collaboration with the Royal Institute of British Architects (RIBA). The state-of-the-art research facility is segmented into eight modules, each sitting atop ski-fitted, hydraulic legs. These can be individually raised to overcome snow accumulation and each module towed independently to a new location.

This video includes a time lapse animation showing construction of the facility, as well as some footage and photos showing what it looks like on the inside:

I’m not sure how the inhabitants feel about it, but I think the interior is as architecturally cool as the exterior!

Halley’s location on an ice shelf poses particular challenges, not the least of which is the need to move the station to prevent it from winding up in the sea. So why site it in such a challenging place?

The ice shelves fringing the southern continent play a critically important role in Antarctica’s ecological, environmental, and geophysical processes. So from a broad perspective, gaining a fuller understanding of those processes — and how they may be changing due to human influences — requires long-term research not just on the continent itself but out on the ice shelves as well. 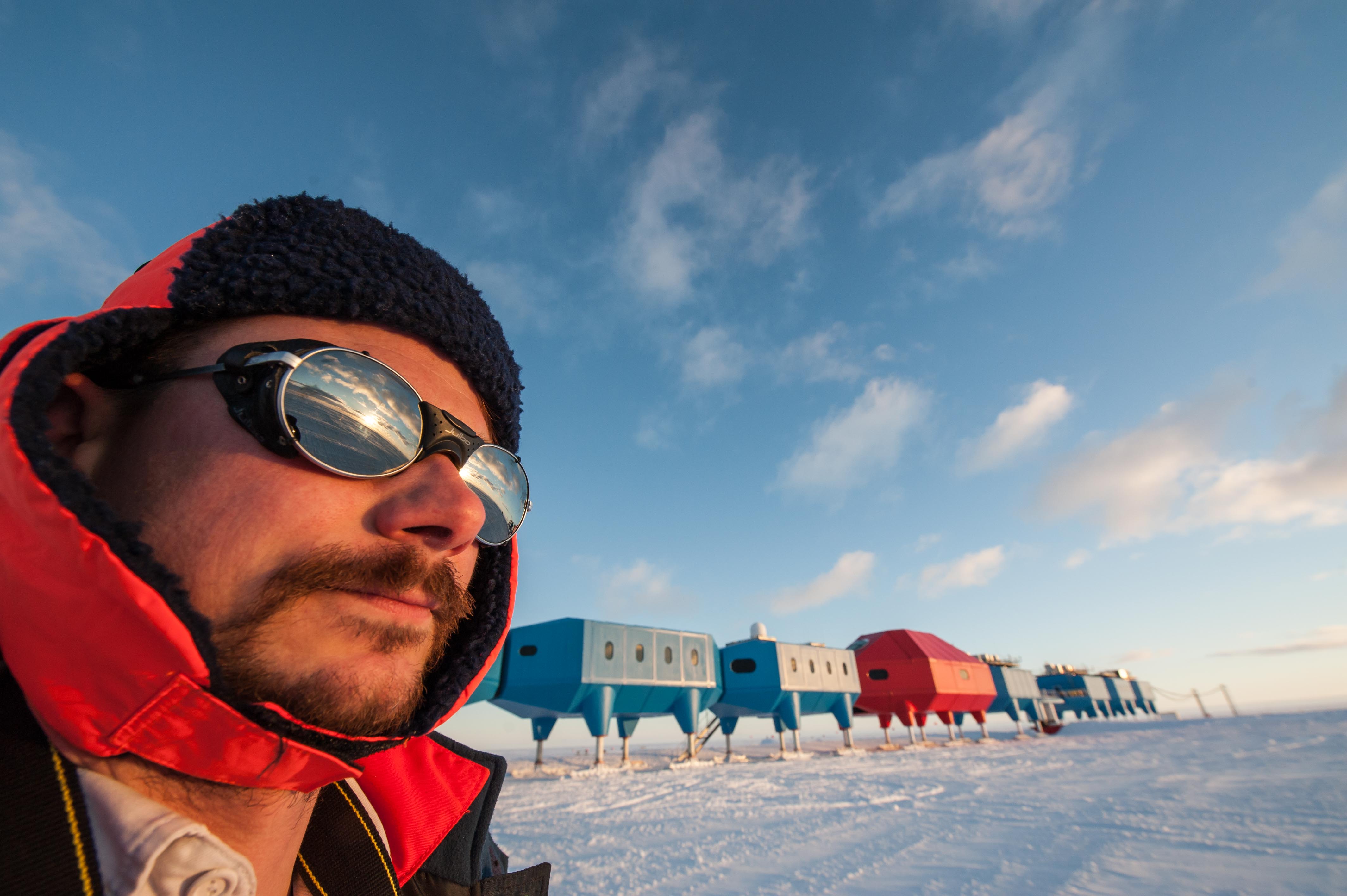 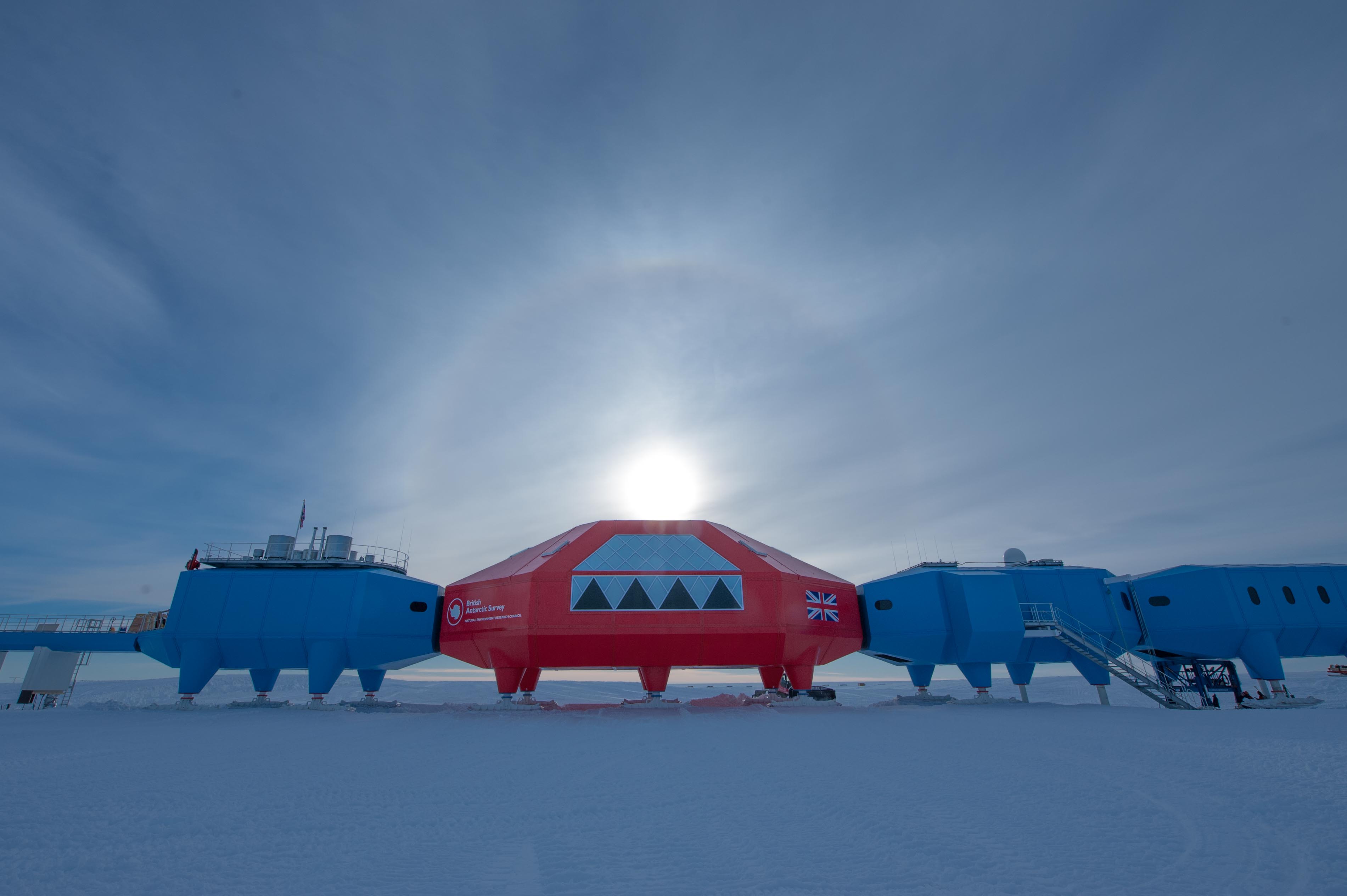 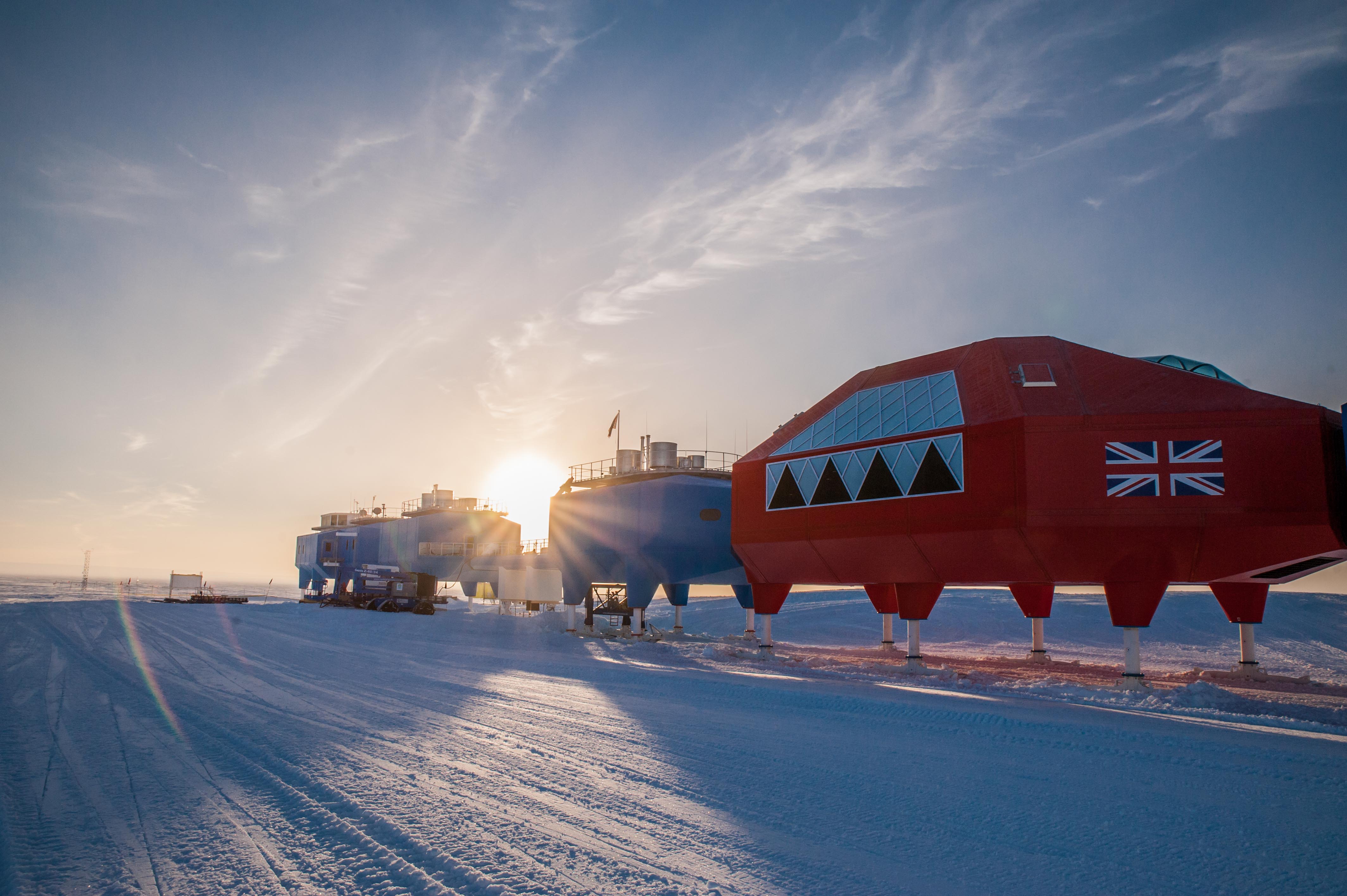 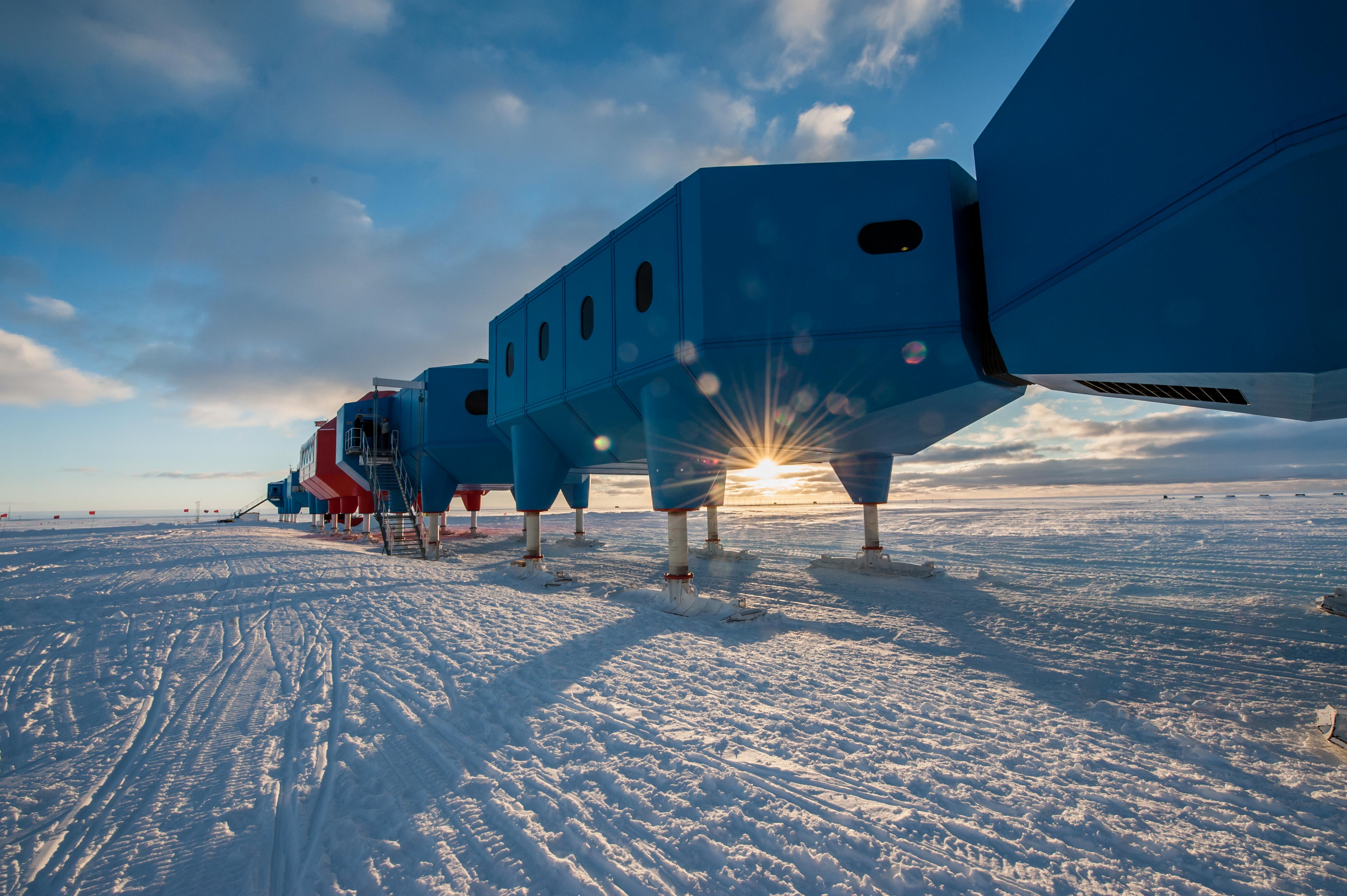 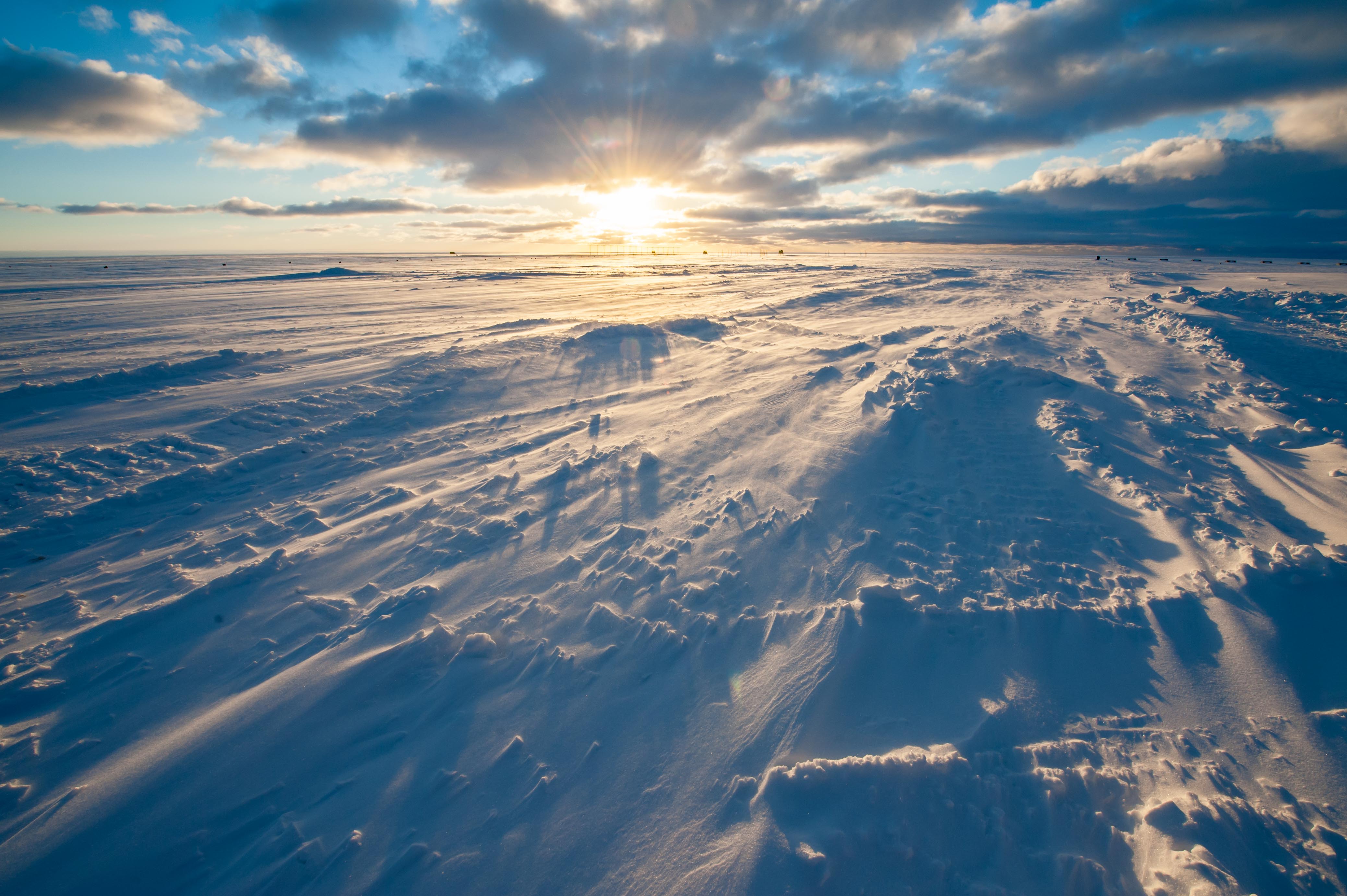 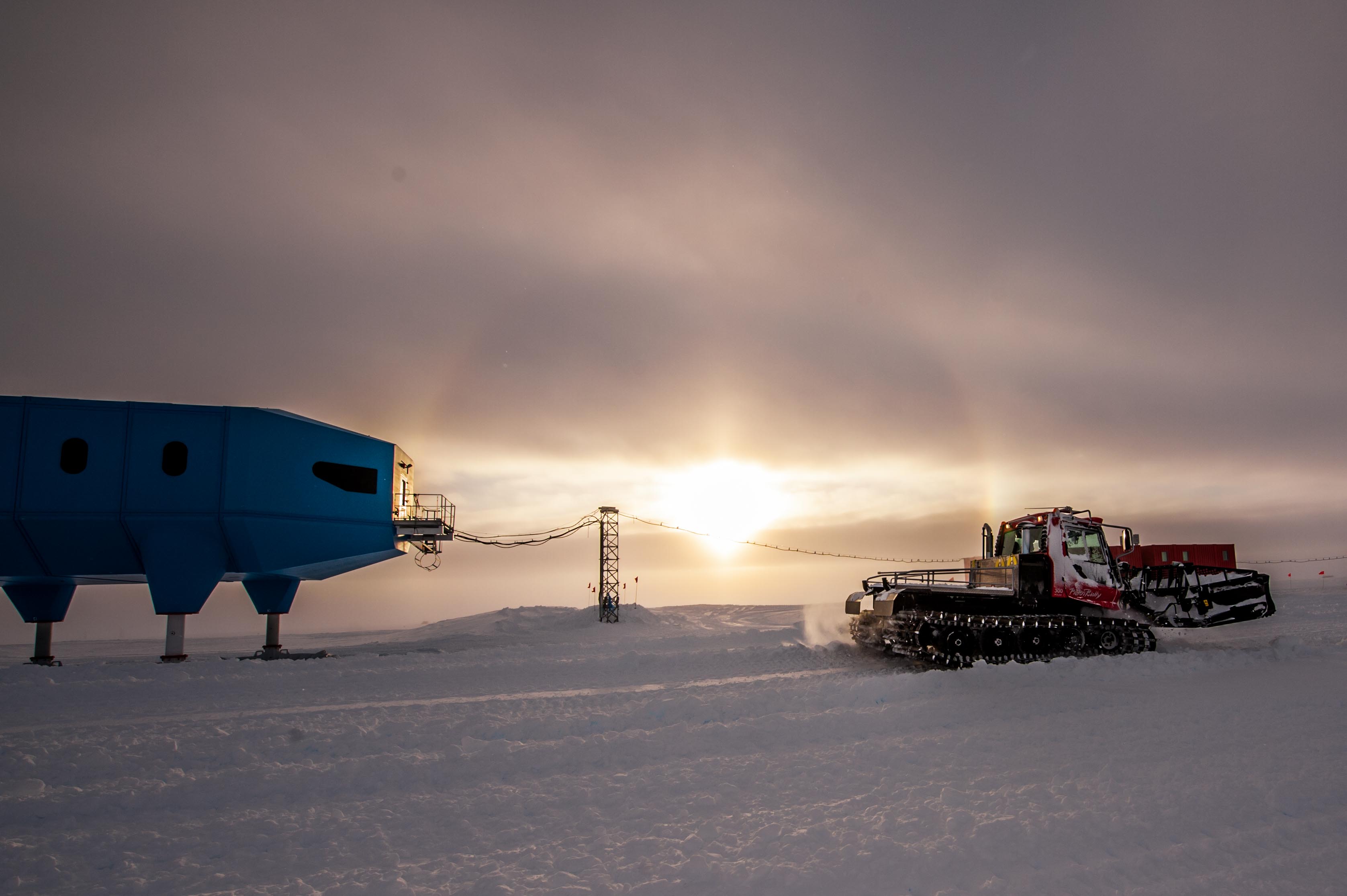 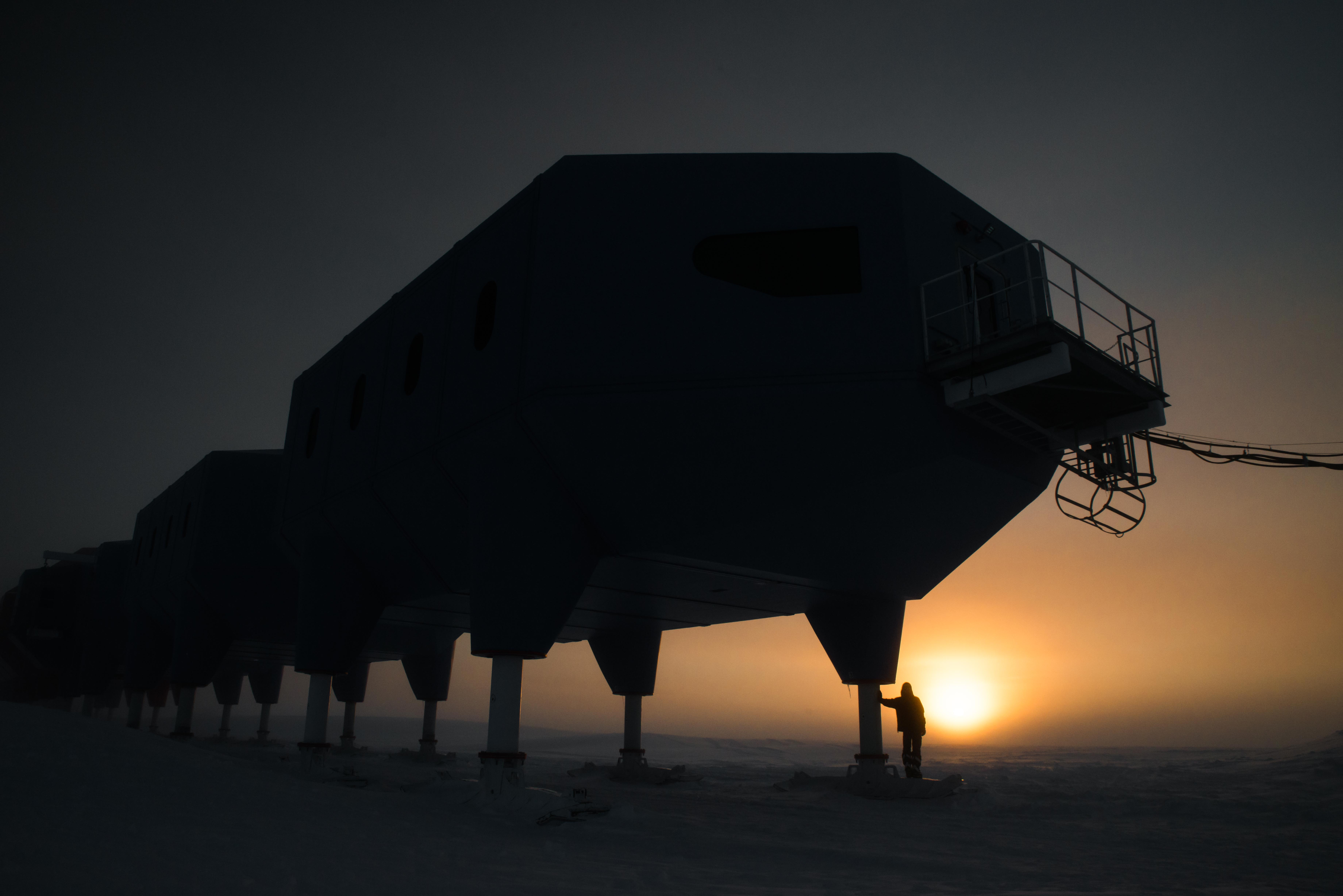 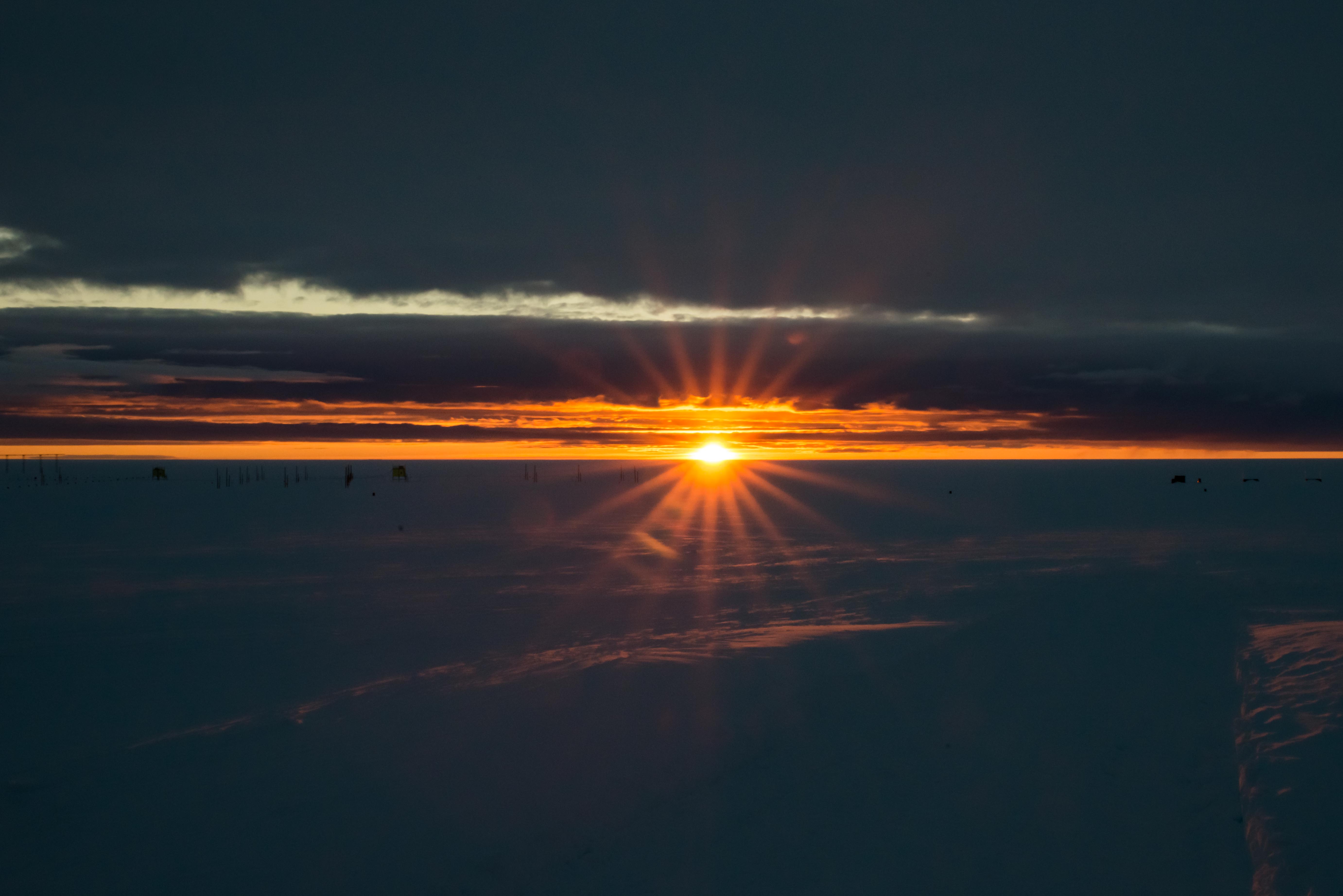 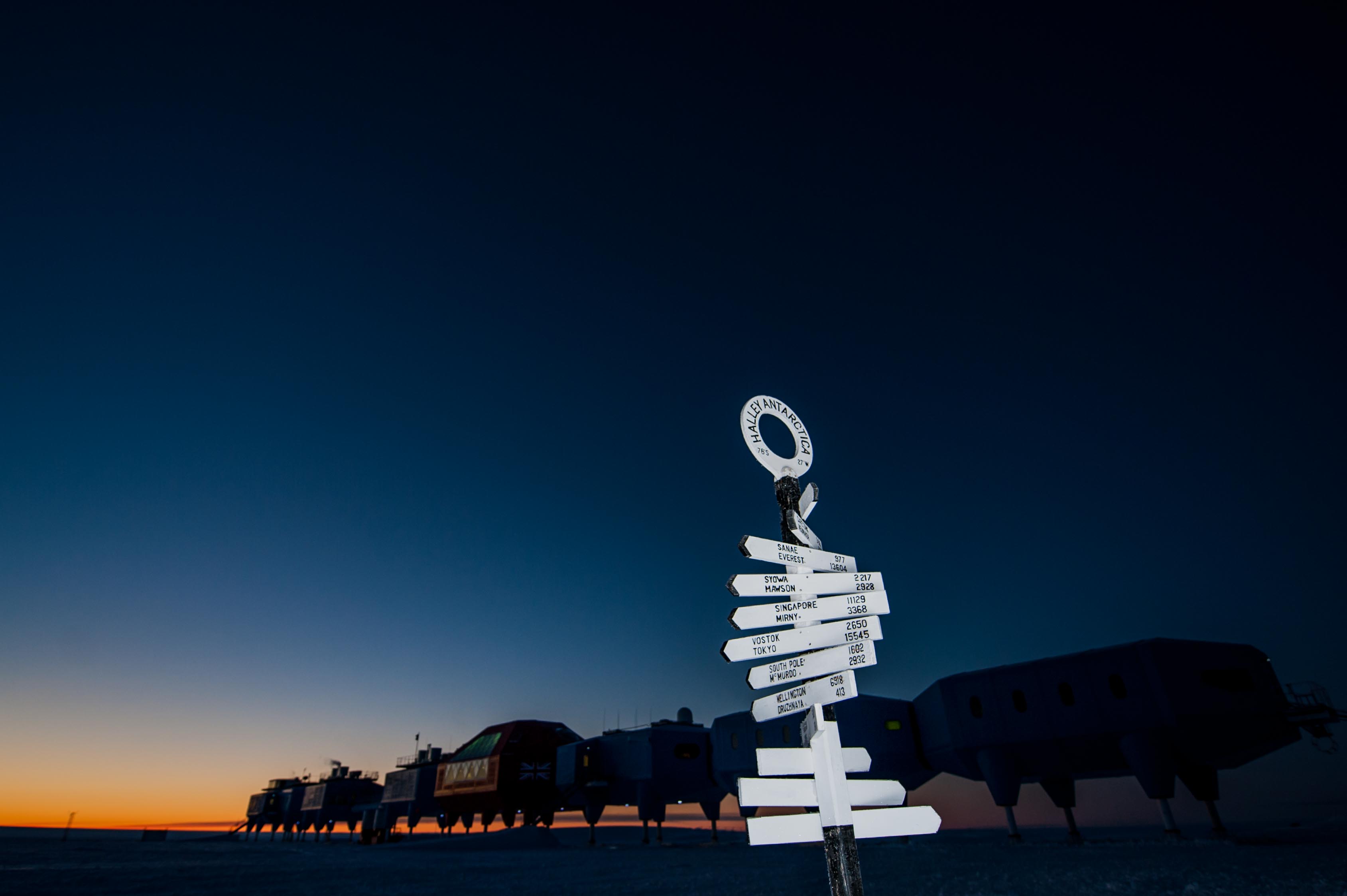 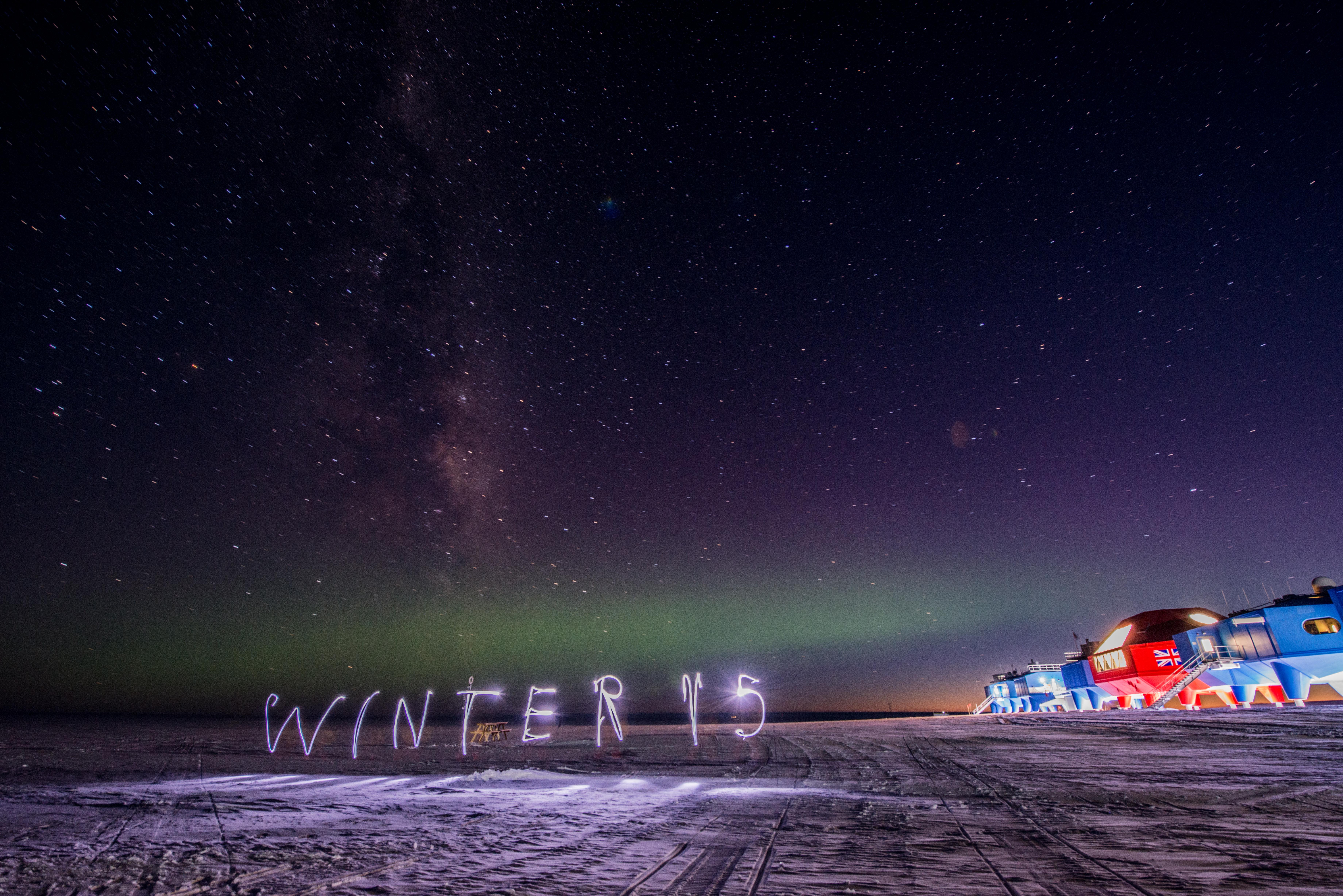 I emailed questions to Tom Welsh to solicit additional details. His reply, which he wrote on March 18th, makes for fascinating reading, especially the details about life on the ice in winter. So check it out:

Q: It has been awhile since your last online diary entry. Do you have anything new and interesting to report? How are things going? And now that you’ve been cut off from outside contact (beyond electronic communications), how does that feel?

A: Due to the short summer seasons here at 75 degrees South, a huge amount of work happens in period of a few months – repairs, maintenance and science projects. Now winter has begun our working lives can step down a gear, although certain things need to happen before we can truly settle into our ‘winter routine’.

The extra staff on station during the summer (around 52 on average) require an extra accommodation building, this is cleaned out, drained of all water and shut down until the following season.

There is a large selection of vehicles at Halley, ranging from Pisten Bullys, John Deere tractors fitted with tracks right through to Snow Mobile ‘Skidoos’, all of which need to be shutdown and stored over winter. A small selection of vehicles are left out, a D5 bulldozer for towing fuel tanks and pushing snow into large melting tanks (used as our supply of fresh water) and certain skidoos for access to local features (including an Emperor Penguin colony 35km away). Along with a deep clean of the station, everyone will indent their supplies and begin ordering equipment for the following season, in preparation for the next busy work period.

The weekends normally involve a sit down dinner and theme night of some sort, ranging from murder mystery evenings to birthday parties and movie nights. Whilst the weather is still relatively warm and the sun remains above the horizon for a good portion of the day, the 13 of us will head out in groups of 3 or 4 to consolidate our Antarctic survival skills over a week spent in the field. This is very important training and means each of the 13 strong winter team will be capable of looking after themselves in the Antarctic environment, whilst also incorporating extra curricular activities such as ice climbing, exploring crevasses and visiting the penguin colony.

This also acts as a very acute reminder of the strength of mind, body and soul of all of the early Antarctic explorers, our lifestyle is much more comfortable than those of Ernest Shackleton and Robert Falcon Scott – it is often easy to forget how harsh Antarctica truly is when living in a modern research station.

Now that we have been cut off from the outside world, with the exception of electronic communications, we have to pull together as a team. Generally everyone will have a down day or two at some point, where loved ones and ‘normality’ are sorely missed. We rely on the other station members to help pick us back up again and provide the close knit and personal support required. Although some days are tough, the majority are wonderful, resulting in a close knit group of friends that will often stay in touch long past the end of their Antarctic deployments.

Q: Describe a typical day for you at the station.

A: A typical day during the winter period for everyone at Halley generally starts around 8 a.m., with home made bread for toast and powered milk on cereals – although we’re now used to the powered substitute, I know from experience that the first taste of fresh milk in 15 months will be a celebrated moment!

The weather has a huge effect on the daily work on station. When there is a calm day, most of us will head out to get as many outdoor jobs done as possible. Particularly as in rough weather we can be confined to the warmth and safety of the Halley VI modules for a day or two.

The work is almost entirely self managed, with line managers back in Cambridge, UK, providing remote support and management. We are all professionals with a job to do and are incredibly proud to have been given this opportunity, resulting in high motivation levels and quality work output.

After the average work day we relax playing bar games such as pool or darts, work out in the fully kitted out gym or settle down to watch a film in our library that doubles as a projector cinema. The food is great, even more so given the lack of variety for the chef. We will have fresh food for around two to three months. Once this is used up or has gone off, we will be limited to frozen, tined and dry food provisions.

Q: What particular challenges does siting the station on a floating ice shelf as opposed to land present?

A: The siting of Halley VI, and indeed all of the previous five Halley stations, does result in some particular and rather unique challenges. The biggest challenge for long term continued operations is the fact that the current station location (on the Brunt Ice Shelf) is moving on average 1.3 metres towards the sea every day. If left in it’s original position the station would eventually fall into the Weddell Sea.

Another challenge is keeping a station in such a remote environment well supplied. The Weddell Sea nearly completely freezes over during winter and retains an incredibly high sea ice concentration for the short summer months. This effectively means we can only get our research and supply ships (RRS James Clark Ross and RRS Ernest Shackleton) to the Brunt Ice Shelf between the end of December and the beginning of March.

Once a ship is alongside the Brunt Ice Shelf, we still need to transport all the fuel, provisions and science cargo 25 kilometers onto the ice shelf to reach the station at our present location. Air access is possible, but only with special aircraft fitted with skis. Aircraft can usually reach Halley from between late October and late March. The weather begins to turn during March and flying days become few and far between. The aircraft we generally see at Halley are de Havilland Twin Otters and DC3 Baslers, these have a cargo capacity but not enough to keep the station running for any prolonged period, we are heavily reliant on ship calls for resupply.

Note: I’ll stay in touch with Tom Welsh and try to follow up here at ImaGeo with updates on how things are going over the winter. So make sure to check back for another Winter Postcard from Antarctica.