Will we ever...? My new column for the BBC 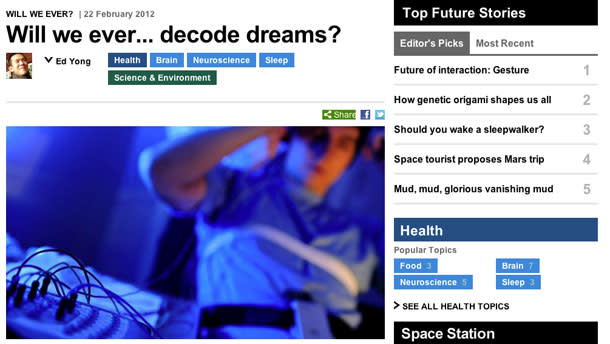 As of this week, I’m starting a new column over at the BBC, as part of their new science and technology super-site. The goal, based on feedback from the BBC’s readership, was to create a space for deeper, richer sources of science writing to complement their typical news pieces. Regular readers of this blog will know that this is a goal that I have a lot of time for. There will be lots of features, and some regular columns. I'm providing one of the latter. So the column is called “Will we ever...?” The goal is to take far-flung and possibly optimistic applications of basic scientific research and look at the steps and obstacles between now and then. You know that sentence in the fourth or fifth paragraph of most science news pieces? The fluffy one that says, “This discovery could eventually lead to [insert optimistic distant application here]”? This column will expand that sentence into a thousand words. The first two columns on decoding dreams (up now) and growing new organs (on Friday) illustrate what I want to do with the column. Decoding dreams seems like a relatively straightforward topic but it is fertile ground for exploration. It’s really about the limits of our brain-scanning technology, our ability to understand how the brain processes images, concepts and more, and what makes dreams special. Growing new organs is something we’re doing right now, but I wanted to look at what it takes to do this, where we are technologically, and which organs present the greatest challenges. In both cases, the leading question could be answered in a simple word: no and yes, respectively. But, as with the topics themselves, the point is in how the question is answered rather than the answer itself. The title provides a nice hook but it could equally be “How will we ever...” or “What’s taking so long for...” I’m still feeling my way around what topics make for interesting columns. They can’t be too big or the piece will be too shallow (so “cure cancer” is out), and as per the editorial mandate, they have to be of broad interest or importance. But really, the main criterion is that the path to the answer (or the obstacles on that path) should be interesting in specific ways. If you have any suggestions of interesting questions, please feel free to share them. There is a final and unfortunate catch. I can't actually read the site. Nor can anyone from the UK. This is the message I get:

We're sorry but this site is not accessible from the UK as it is part of our international service and is not funded by the licence fee. It is run commercially by BBC Worldwide, a wholly-owned subsidiary of the BBC, the profits made from it go back to BBC programme-makers to help fund great new BBC programmes.

I have absolutely no idea why this means that I can't read the site at all, but c'est la vie. If this seems crazy to you, I'm not going to disagree. Here's a hilarious workaround. Meanwhile, the compromise I've reached is that I get to republish the column here with a three-day delay.