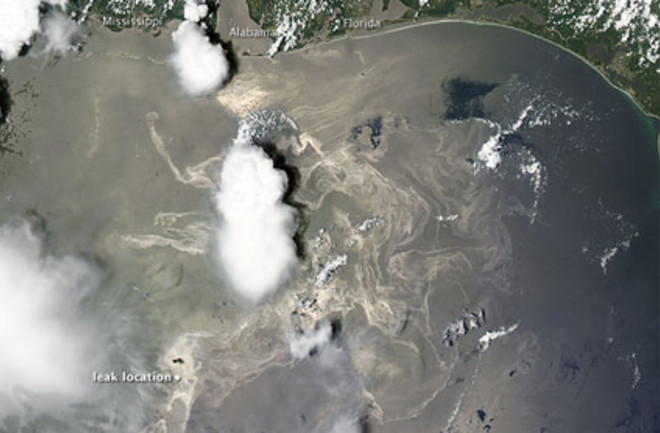 Perhaps it's a disservice to continue calling the oil pouring into the Gulf a spill. "Spill" makes it hard to conceptualize the estimated 60,000 barrels of oil per day blasting up from a well more than 5,000 feet below sea level. It also makes it difficult to picture how, as BP estimates, as much as 40 percent of the material "spilling" is methane gas. That methane has been largely overshadowed by the horror of oil-soaked pelicans and tar balls washing ashore, but now a survey, completed on Monday, has measured how the methane has spread. What's the problem with methane? The microbes that feed off it. It can create "methane seep ecosystems"--shallow food chains that eat crude oil and dissolved methane and in the process consume all available oxygen, leaving nothing for other marine life forms. Bacteria eat the methane and "ice worms" (so-called because they live around ice-like methane hydrate) eat bacteria, but nothing else eats these worms. This creates a "dead zone."

So in short [an abundance of creatures that use] methane for food and oxygen to "breathe" will create areas where only bacteria and a few other non-life sustaining organisms can live. All others die. [San Francisco Chronicle]

John Kessler, a Texas A&M University oceanography professor, finished a ten-day exploration of the spill earlier this week, measuring levels of dissolved methane around 4,500 feet under the water's surface from 35 different sites, the furthest seven miles from the spill.

Levels of methane in deep-ocean waters near the Deepwater Horizon oil spill are 10,000 to 100,000 times higher than normal, and in some very hot spots "we saw them approaching 1 million times above" what would be normal, says ocean chemist John Kessler. [USA Today]

Kessler's team also measured the levels of oxygen depletion--the sign that microbes are feeding on the methane. These numbers varied.

We'll have to wait for further results to see if the dissolved methane is indeed fueling a new dead zone in the Gulf. As Science Insiderreports, Kessler and

David Valentine, an oceanographer at the University of California, Santa Barbara, also hope that measuring the dissolved methane may be a way to quantify the extent of the spreading oil. Recent posts on the Gulf Oil Spill: 80beats: From Marsh Grass to Manatees: The Next Wave of Life Endangered by BP’s Oil 80beats: Obama’s Speech on the Oil Spill: What Do You Think of His “Battle Plan”? 80beats: BP to Kevin Costner: We’ll Take 32 of Your Oil Clean-up Machines 80beats: Should We Just Euthanize the Gulf’s Oil-Soaked Birds?