Why You Can't Fake A Good Horn 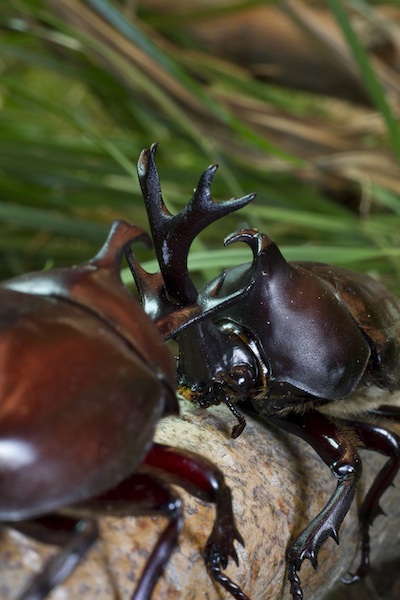 Next month, my first co-authored book is coming out. Evolution: Making Sense of Lifeis a textbook for biology majors, and my co-author is Doug Emlen, a professor at the University of Montana. I've heard many tales of disastrous collaborations between scientists and science writers, and so I don't enter into them lightly. But working with Emlen has been a delight. No matter how many times we've had to rewrite a chapter, he threw himself into the work as if he was cannonballing into a swimming pool. And yet somehow Emlen was advancing his own research in evolutionary biology at the same time, quietly chugging away on some remarkable experiments. And today--just a week after we shipped our book off to the printers--Emlen's latest, most intriguing paper has just come out in the journal Science. If he wasn't my co-author, I'd probably be writing about the new paper in the New York Times (or perhaps get into a bare-knuckle fight with the other reporters there for the right to do so). But given our connection, I'm going to use my blog to describe it. When you're a young evolutionary biologist, you've got to find creatures and questions that will sustain your career. Twenty years ago, Emlen realized that the perfect creatures for him would be horned beetles. In thousands of beetle species, the males grow enormous horns, which they use to battle each other for territories--be they tunnels, branches, or globs of sap. Often, male beetles will size each other up and not even bother challenging a beetle with a giant horn--because horns are a reliable signal of the good shape of a male beetle. These beetles embody Darwin's original ideas about how sex could shape life. The competition for mates would favor mutations that enlarged the horn--not because it boosted the survival of beetles, but because it made male beetles more successful in the struggle for the chance to mate. (Terri Gross spoke to Emlen about beetles, and animal weapons in general, on Fresh Air.) But there's another way to contemplate a beetle's horn. It develops as a beetle undergoes its metamorphosis from a larva into an adult. The mutations that build bigger horns must do so by altering the course of development. Until the late 1900s, the evolution of animal development was fairly mysterious, because scientists had no idea of which genes were involved in building emryos. But these days, that's changed drastically. Emlen and I write about this at length in Evolution: Making Sense of Life, and online you can read about this field--"evo-devo"--over at the Understanding Evolution web site. Emlen and his colleagues have discovered all sorts of intriguing things about the development of beetle horns. For example, big horns pull away precious resources from other parts of the developing beetle body. Male beetles with big horns have small eyes and antenna, Emlen has shown. This trade-off may put a limit on how big horns can get, since males with reduced eyes and other senses won't fare well, even if they can battle any rival. Beetles are hardly the only animals with sexual ornaments. Male widowbirds have long feathers, elk have huge antlers, and fiddler crabs have massive claws. One question that has occupied evolutionary biologists for decades is why these ornaments tend to be such reliable signals. If all it takes to scare off a rival beetle is a big horn, then it would make sense for weak beetles to shore up all their resources and build massive ornaments. Yet big ornaments continue to serve as trustworthy signals--as a warning to rival males and as an attraction for females. In his new study, Emlen and his colleagues offer an evo-devo explanation for the link. As animals grow, two proteins play a major role: insulin and insulin-like growth factor (known as IGF). These hormones flow through the body, latch onto special receptors on cells, and trigger a series of chemical reactions that lead animals to grow faster. The amount of these proteins coursing through the body depends, in turn, on external factors such as how good the animal's diet is. High insulin/IGF levels will spur an animal to develop a large body; in bad conditions, its body will be small. But individual animals vary in this response: in a good environment, the signals that some animals get from their insulin/IGF proteins make them grow bigger than other animals. 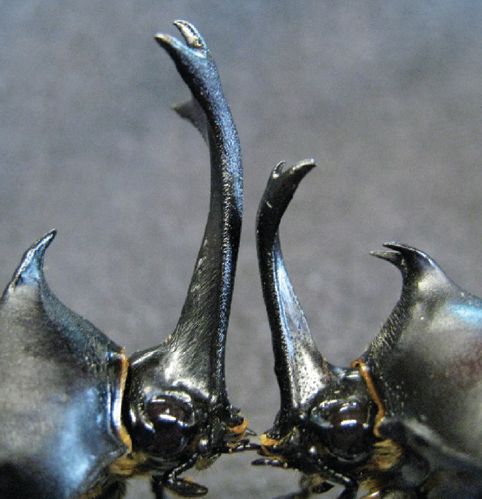 Emlen and his colleagues wondered if sexual ornaments were especially sensitive to the insulin/IGF signals. To find out, they turned to the aptly named rhinoceros beetles. The scientists injected molecules that blocked the insulin/IGF signal into rhinoceros beetle larvae just before they started to grow their horns. Blocking the signal modestly stunted the bodies of the beetles. But it devastated the horns. Compared to the wings of the beetles, Emlen and his colleagues found, the horns were eight times more sensitive to manipulations of the insulin/IGF signals. (In this photo, the beetle on the right side has been injected with the insulin/IGF blocking molecules.) The new study suggests that the exaggerated size of the beetle horns is unavoidably linked to the overall quality of a male. It grows in response to the same signals that control the entire body, but is more sensitive to them. There's no way for weak males to cheat, because they can't avoid using insulin/IGF signals to build a horn. If they have weak signals, they'll produce a small horn. And what goes for beetles may go for some other animals--or maybe a lot of other animals. When red deer stags grow new antlers, for example, the cells at the tips produce receptors for insulin/IGF. Emlen doesn't touch on humans in the new paper, but the fact is that insulin/IGF signals are crucial in the transformation of boys to men, complete with big bones and muscles. Whether there's a link in our species as there is in beetles is something I hope that we can report on in future editions of our book. [Images: Doug Emlen]