Why gonorrhoea is like a general sabotaging his own siege 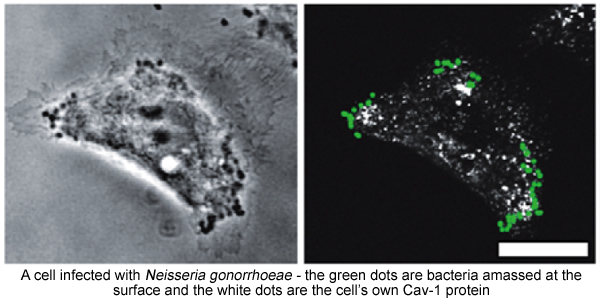 You’re a general laying siege to a fortress. You troops are eager to attack and they’re surprised when you order them to hold back, so when your message to the enemy prompts them to strengthen their defences. It seems like a fool’s strategy – why would any commander prevent their army from entering a building they are trying to storm? The reason is that the troops are ill-prepared for battle. They need to be trained and they need to be properly equipped. If they rushed in unprepared, they’d risk a swift defeat. For the moment, the best strategy is to sit, wait and prepare. This scenario seems odd, but it’s what happens when people contract gonorrhoea. This sexually transmitted disease is caused by a species of bacteria called Neisseria gonorrhoeae. During the later stages of infection, the bacteria invade our cells and use them to make more copies of themselves. They may even advance through the cells into deeper tissue. But first, they wait. Jan Böttcher from the Max Planck Institute for Infection Biology has found that for a time, Neisseria deliberately prevents itself from entering the cells that it targets. It actually stimulates the cells to strengthen their defences, in the same way as our hypothetical general. Neisseria begins its invasion by attaching long filaments called pili to the surface of a cell. Once attached, these molecular grappling hooks can contract with a force that’s 100,000 times the bacterium’s own weight, pulling it towards its target. Slowly but surely, colonies of the bacteria gather on the cell’s surface. But there they stop. Only later will they penetrate the cell’s outer defences. This reticence isn’t because of the cell keeps the bacteria at bay. In fact, by default, the cell would inadvertently swallow the invaders gathered at its surface, enveloping them in tiny vesicles. The bacteria actually stop the cell from doing this, actively halting their own progress. The bacteria summon a structural protein called actin to the site where their pili have attached. Actin forms long thin filaments that act as a skeleton for our cells, providing them with structure and support. By amassing actin at their point of entry, Neisseria actually stimulates the cell to produce a barricade that prevents them from breaking through. This reinforcement depends on one of the cell’s own proteins – caveolin-1 or Cav1. Without it, the lurking bacteria are rapidly smuggled into the cell. Within a few hours of infection, Cav1 collects at the site where the pili have attached. The bacteria also amend Cav1, attaching a small chemical group – a phosphate – onto it. This attracts other proteins like actin, and messengers like Vav2 and RhoA, which contribute to the defences. Why does Neisseria go to all this trouble? Böttcher says that once the bacteria are inside, they’re rapidly killed. By delaying their invasion, they can build up proteins that prepare themselves for this final phase, gathering the weapons they’ll need to make their siege a success. Only when they’re ready do they actively invade the cells they sit upon, sometimes emerging out the other side and advancing into deeper tissues. These strategies aren’t unique to Neisseria either. Böttcher also found that a disease-causing strain of Escherichia coli - the commonly studied gut bacterium – also uses Cav1 to block its entry into human cells until the time is right. Reference: PLoS Biology http://dx.doi.org/10.1371/journal.pbio.1000457More on bacteria: