Why Bears Are the World's Best Hibernators 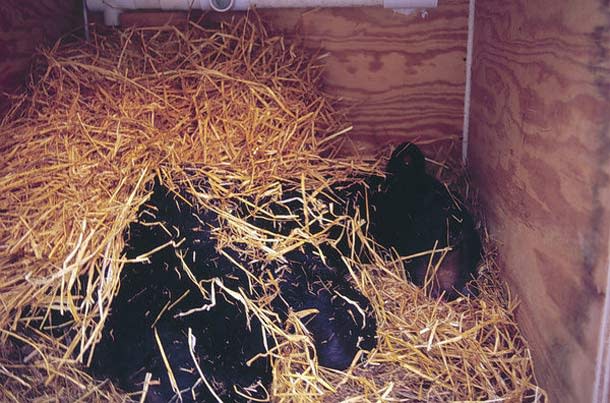 A hibernating bear might appear to be the perfect metaphor for laziness, laying around half the year in carefree slumber. But in fact, it is a marvel of efficiency. New research in the journal Science shows that bears can drop their metabolic rate all the way down to 25 percent of normal while losing only about 10 degrees in body temperature. Øivind Tøien and colleagues got lucky when a few black bears came a little too close to residents of Alaska for the Alaskans' comfort. The state's Department of Fish and Game intended to remove them as a "nuisance," so the researchers got their hands on the bears and did a little hibernation experiment. They built artificial dens for the large mammals, complete with cameras and observational equipment including radio transmitters, allowing them to track the bears' body temperatures and other vitals.

It was thought that, like most animals, the bears would have to drop their body temperatures to put the brakes on metabolism—each 18-degree Fahrenheit (10-degree Celsius) drop in temperature should equal a 50-percent reduction in the chemical activity. [National Geographic]

The fact that bears were so much more efficient than other hibernators came as a big surprise, Tøien says:

"We knew that bears decreased their body temperatures to some degree during hibernation, but in Alaska we found that these black bears regulate their core temperature in variable cycles over a period of many days, which is not seen in smaller hibernators and which we are not aware has been seen in mammals at all before." [The Guardian]

"The bears typically during hibernation will take a deep breath and exhale and when they do, their heart stops and doesn't beat at all for 10, 15, 20 seconds," said Brian Barnes, the Institute of Arctic Biology researcher who led the study. "They held their breath for about a minute, and it's only when they inhale again that their heart picks up," he told BBC News. "It's just this alternative way of being that's very spare, that we didn't know was possible, particularly in large animals." [BBC News]

"Sure," you might be thinking, "that's great for bears

, but when can I get in on this hibernation deal?" The researchers in their press conference didn't shy away from the idea that bears' remarkable abilities could be used someday in medical applications in regulating human metabolism

, or even in researching human hibernation for those long-distance voyages we'll be making to other stars.

They noted that some form of hibernation has been found in nine orders of mammals (including a primate, the fat-tailed dwarf lemur of Madagascar), so some of the biochemical triggers may still exist in our own cellular machinery. "The trick would be to find drugs that would emulate those same changes in people," Barnes told reporters at today's AAAS briefing. Toien said the hibernation trick would come in handy in outer space as well — and not just for long bouts of suspended animation, such as those depicted in "2001: A Space Odyssey" or the movie "Avatar." Toien noted that bone loss and muscle loss is a problem right now for long-term spacefliers on the International Space Station. New medications, sparked by future research into hibernation, could retard the bone-loss process in space and on Earth. [MSNBC]

—Do they hold the secret to keeping us healthy? DISCOVER: Polar Bears (Finally) Make the Endangered Species List