Why a Greyhound or a Racehorse Doesn't "Pop a Wheelie" 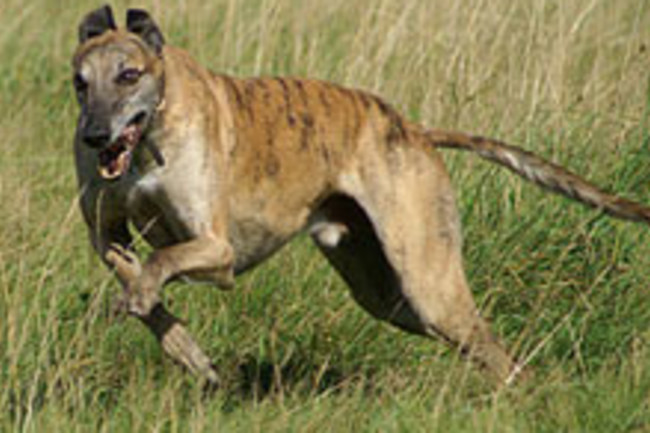 Contrary to what scientists previously thought, it's not only the power of a dog's muscles that limits how fast the animal can accelerate; instead, it's the need to keep those front paws on the ground and avoid doing a backflip. Although animals clearly don't have wheels, the authors have branded this potential imbalance a quadrupedal "wheelie," according to a study (pdf) published in the journal Biology Letters. The ability to gain speed quickly is crucial for survival, but there's a limit as to how rapidly an animal can accelerate. Researchers wondered whether the "wheelie" problem experienced by cars during a drag race could be a factor in four-legged animals' ability to speed up.

They came up with a simple mathematical model... to see how fast a quadruped could accelerate without tipping over backward. The model predicts that the longer the back is in relation to the legs, the less likely a dog is to flip over and the faster it can accelerate. Then the researchers tested the model by going down to the local track, London's Walthamstow Stadium, and video-recording individual greyhounds as they burst out of the gate in time trials. The acceleration approached--but never exceeded--the limit predicted by the model [Science NOW]. That means that at low speeds, it's the ability to keep his front end from pitching up that determines a dog's maximum acceleration.

The scientists got the "wheelie" good idea when they considered previous research, which showed that when accelerating, some lizards balance on only on their hind feet, says lead author Sarah Williams:

"That brought around the theory that perhaps this 'wheelie-ing' might be limiting whether they could accelerate any further" [BBC News]. To generate their model of how much speed our four-legged friends can pick up, the team took a number of measurements from ponies and greyhounds: the lengths of their legs, the distance from hip or shoulder to their centre of mass, and so on. They then developed a mathematical model to match the "pitch avoidance" that they would undertake to keep them from wheelie-ing [BBC News]. The researchers found that it's essentially the geometry of the animal's body that limits its maximum acceleration, since these measurements determine what the animal must do to avoid a backflip.

But once an animal has gotten moving, it's muscle power that determines whether or not it's possible to speed along more quickly. Says Williams:

"At higher speeds, the pitch limit appears to be overridden by an additional limit, that is the amount of power an animal can produce with its muscles - the power its engine can produce, essentially" [BBC News].

Related Content: 80beats: Wolves Have Dogs to Thank for Their Dark Fur 80beats: When a Hummingbird Goes Courting, He Moves Faster Than a Fighter Jet 80beats: To Check Shuttle for Damage, a Zero-Gravity Backflip 80beats: Australian Lizards Can “Pop Wheelies”