Erase that picture of man the hunter: Early humans may have spent a million years snacking on termites.

Thin, sticklike bone implements (below) are common at hominid sites in South Africa 1 million to 2 million years old. Anthropologists had believed the tools were used to unearth tubers. But Francesco d'Errico of the Institute of Quaternary Prehistory and Geology in Talence, France, and Lucinda Backwell of the University of Witwatersrand in Johannesburg found microscopic wear patterns indicating the tools were used to dig into termite mounds. "Anthropologists had given much importance to meat in human evolution, even suggesting hunting allowed our brains to grow," d'Errico says. "But termites and other insects clearly played an important role in early hominid diet, so perhaps other things stimulated evolution more than diet." 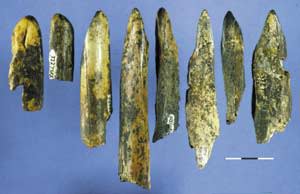