When Rome Was Falling, Europe's Climate Was Changing 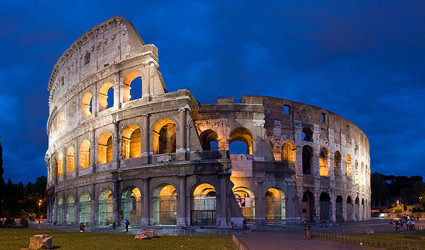 The Earth's climate swings have disrupted human societies and civilizations throughout our species' history; take examples like those in Jared Diamond's Collapse. But are they also connected to one of the most famous collapses in the history books—the fall of the Roman Empire? There are a host of reasons for the fall of Rome, researchers led by paleoclimatologist Ulf Büntgen write today in the journal Science. However, analyzing the climate records of the past 2,500 years reveals that changes to Europe's climate coincided with the rise and fall of the famous civilization. Such a correlation could suggest that climate played some part in building the Romans up and in tearing them down.

Büntgen and colleagues collaborated with archaeologists to amass a database of more than 9,000 pieces of wood dating back 2,500 years. Samples came from both live trees and remains of buildings and other wooden artifacts, all from France and Germany. By measuring the width of annual growth rings in the wood, the researchers were able to determine temperature and precipitation levels on a year-by-year basis. [Discovery News]

The results of this unprecedented collection of climate data: In the third century B.C., when Rome fought the First and Second Punic wars against Carthage

and began its ascent to Mediterranean empire, times were good. The rains fell, the temperatures were warm, and agriculture would have flourished. But by the third century A.D., the time when the Germanic invasions

began to creep further into Roman territory, more droughts had come to Western Europe. This trend persisted into about the 6th century A.D. This is no proof that changing climate caused the fall of Rome, but it's no stretch of the imagination to think that worsening conditions could have exacerbated political divisions, invasions, and other Roman woes.

"Relatively modest changes in European climate in the past have had profound implications for society," says Michael Mann of Penn State University in University Park, Pennsylvania. Other studies have shown how war and climate are often intimately linked. For example, periods of unusually cold weather in China during the last millennium preceded 12 of the 15 major bouts of warfare. [New Scientist]

Indeed, the very wood samples that reveal these climate trends also appear to show that productivity took a hit when the climate turned unfavorable, according to David Stahle, who wasn't involved in this study:

By counting wood samples, the analysis also created a rough measure of human activity. In eras of prosperity, more trees were cut down for building and fuel, yielding more samples in the archaeological record. At other times, like the years after the Black Death and the so-called Migration Period between 300 C.E. and 600 C.E. when the Roman Empire was overwhelmed by tribes pushing in from the east, the number of wood samples dwindles to nearly nothing. "It's an interesting proxy of demographic trends and really the most provocative part of the study," says Stahle. [ScienceNOW]

Surely more studies to come will try to root out what life was like as Rome crumbled. But if Büntgen's team has done nothing else here, Mann notes, they've built up a year-by-year climate record deeper into the past than anyone else, which will prove its worth in detailing the Earth's climate shifts. Related Content: DISCOVER: It's Getting Hot in Here: The Big Battle Over Climate Science

DISCOVER: Caesar for a Day