When Astronauts ‘Saved’ the Worst Year in American History (Not 2016) 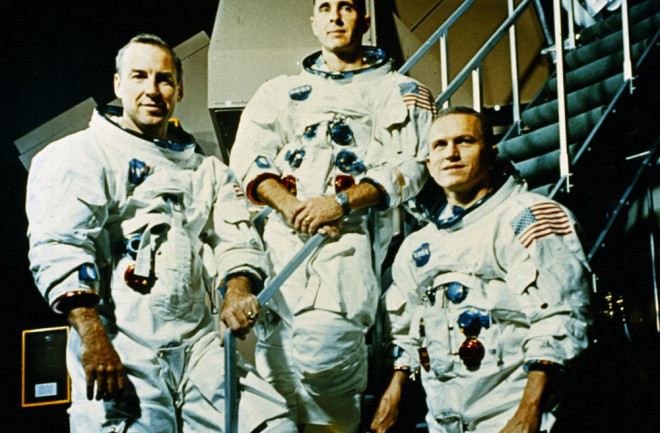 The Apollo 8 crew, from left, Jim Lovell, Bill Anders and Frank Borman. (Credit: NASA) You know it’s been tough times when a Dumpster fire is the meme of the year. Indeed, 2016 has been rough: pop culture icons died, police and activists squared off in major cities, we survived a cutthroat presidential election, Syria burned, terrorists attacked around the globe. And, like today, most people were eager to tack a new calendar on the wall by the time Bill Anders, Frank Borman and Jim Lovell launched for the moon on December 21, 1968 — the unofficial worst year ever in the U.S. That year, MLK had been shot dead, Bobby Kennedy, too. U.S. soldiers were dying every day. Hundreds of unarmed Vietnamese civilians were killed in the Mai Lai massacre. Political unrest and violence gripped the country. Riots hit the Democratic National Convention in Chicago. And Richard Nixon was elected president. “By Dec. 31, I was literally too pessimistic to say Happy New Year,” historian Susan Strasser told Slate in July. (The piece revisits the worst years ever). But as Christmas neared, humanity found reason for hope. Astronauts — heroes in those days — were making their first trip from the Earth to the moon. For NASA, the mission was a Hail Mary. It was a last ditch effort to beat the Russians, who U.S. intelligence believed was readying to launch their own crewed spacecraft.

In the wee hours of the morning, on Dec. 29, 1968, thousands of people gathered at the Ellington Air Force Base to welcome the members of the Apollo 8 crew back home. (Credit: NASA) So, the American space agency scrapped its plans to orbit Earth and test the lunar lander. Instead, Apollo 8 would orbit the moon. Their ride — the titanic Saturn V rocket — had seen few tests. And three astronauts had just died the previous year. MIT engineers cooked up new navigation plans and the astronauts retrained for their new destination. As they planned the flight changes, the astronauts realized that they’d be orbiting the moon on Christmas Eve. They wanted to do something special. “So we thought, well how about changing the words to ‘The Night Before Christmas’?” Lovell told Astronomy magazine in a recent interview. “That didn’t sound too good. Or how about ‘Jingle Bells’? No, that was even worse. So we were at an impasse.” A friend suggested farming it out to a newspaper reporter he knew, figuring he was pretty good with words. As Lovell tells it:

He spent one night trying to figure out what these three people should say. It was going through quite a bit of the evening, and pretty soon, around midnight, his wife came down the stairs and said, “What are you doing?” And he told her the story that he was writing this thing for the Apollo 8 crew. He hadn’t really come up with anything yet. And she said, “Well, you know, that’s simple — why don’t they read from the Old Testament the first 10 verses of Genesis? I mean, it’s an emotional time, sort of a holy time, but Genesis, the first 10 verses, is the structure of most of the world’s religions — especially Christianity, but Judaism and also Islam.” All had their origins somehow from the Old Testament. So that’s what we did. Got it down and put it on fireproof paper, and it was put in the back of the flight manual.

The Dec. 21 launch went off without a hitch. Anders, Borman and Lovell soon became the first to leave Earth’s gravity behind. And on Christmas Eve, as the trio completed their fourth orbit around the moon, something totally unexpected happened: The spacecraft turned perfectly just as Earth broke over the lunar horizon. "Oh, my God, look at that picture over there," Anders told Lovell. "There's the Earth coming up. Wow, is that pretty!"

The iconic Earthrise photo. (Credit: NASA) That Earthrise image became one of the most iconic in human history. Five orbits later, just as evening settled across America, the astronauts appeared on television as scheduled. The eyes of the world — an audience estimated at half a billion people — turned to watch. The space farers showed Earth rising out the spacecraft window, and panned their cameras across the lunar surface. Then they took turns reading from the book of Genesis. "For all the people on Earth," Anders said, "the crew of Apollo 8 has a message we would like to send you.”

After concluding, Lovell added: “And from the crew of Apollo 8, we close with good night, good luck, a Merry Christmas, and God bless all of you — all of you on the good Earth.” At the time, with their focus solely on the mission, the astronauts hadn’t realized how powerful the event was for humans back on Earth. Time magazine went so far as to name them people of the year. “It really wasn't until we came back that we suddenly realized what the flight had accomplished as to the attitude of the Americans,” Lovell said in 2014. “We got so many telegrams, and one I remember distinctly, all it said was ‘You saved 1968’.” Eric Betz is an associate editor of Discover