What Scientists Learned by Dropping a Frozen, Dead Bird in Water 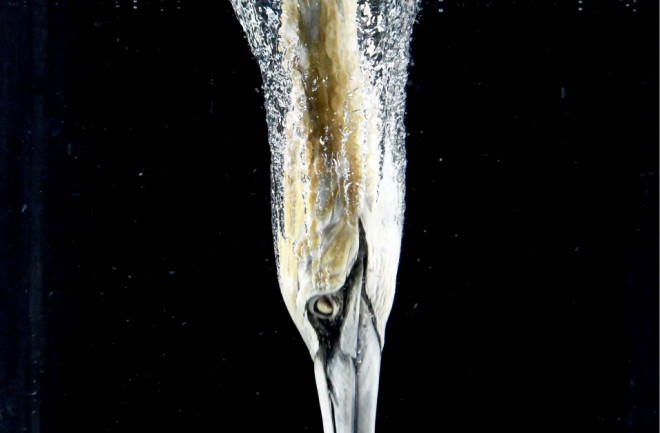 A dead, frozen gannet plunges into a tank. (Credit: B. Chang, M. Croson, L. Straker, S. Gart, C. Dove, J. Gerwin and Sunny Jung) For sea birds like the gannet, diving is more of a way of life than an idle pastime. They feed near the coast, dive-bombing en masse into the water to reach schools of fish swimming below. Gannets can dive from more than a hundred feet in the air, reaching speeds in excess of 60 miles per hour on the way down — a feat that would likely kill a human. How the birds manage to avoid damaging their long, slender necks when pitching head-first into the water has been a longstanding mystery that required rather macabre methods to solve. In a new study, researchers from Virginia Tech conducted experiments with both a model consisting of cones and a rubber neck, and a dead, frozen gannet to see what happens when birds take the plunge.

Sunghwan Jung, a coauthor on the paper, and his team gathered data in the lab using slow-motion video and their 3-D printed model to see what happened when they tried various combinations of head shape, neck length and impact speed. But first they needed to see how an actual gannet entered the water. Trained gannets are few and far in between, so researchers went for the next best thing: they borrowed a gannet specimen from the North Carolina Museum of Natural Sciences, froze it into a diving position, and dropped it into the water. They found that the key to the gannet dive is a combination of minimizing drag and stiffening the neck muscles to prevent too much motion. Gannets' sharp beaks and long, narrow skulls help them enter the water cleanly and safely, and they straighten their necks just before hitting the water to protect the vertebrae. Their research was published Wednesday in the Proceedings of the National Academy of Sciences.

Almost As Good As the Real Thing

Researchers concluded that gannets are actually playing it safe when they dive: based on their physiology, they could likely hit the water as much as three times faster, says Sunghwan Jung, a coauthor of the paper. The limits of an average human dive probably tops out at around 100 feet, says Jung, based on the maximum compressive force our vertebrae can take. That's right around an average dive for a gannet.