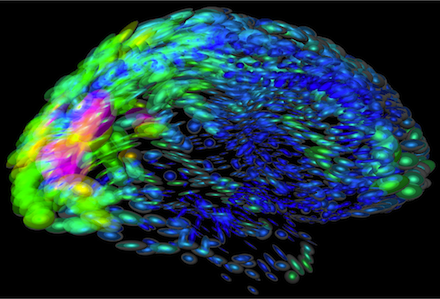 In today's New York Times, I profile the neuroscientist Giulio Tononi, who has been obsessed since childhood with building a theory of consciousness--a theory that could let him measure the level of consciousness with a number, just as doctors measure temperature and blood pressure with numbers. There's one fascinating aspect of Tononi's work that I simply didn't have room for in a newspaper article (even with my editor's long-suffering generosity with the column inches). During each moment of consciousness, Tononi argues, our brain enters a specific state. That state is an imaginably complex pattern of activity in our neurons that allows us to have a conscious experience of a swim in the ocean or a tedious tax form or sitting in a quiet, dark room. Tononi has been developing a mathematical way to represent different states of a brain, or any information-processing system. He envisions these states--or qualia--as multidimensional shapes. From one moment to the next, these qualia change shape as we experience different thoughts. The level of our consciousness is the height of these qualia-shapes. We go through out waking hours having different experiences and different thoughts, but our level of consciousness remains the same. Tononi and his colleague David Balduzzi laid out a geometry of qualia in a paper they published last year. He argues that someday it may be possible to reconstruct that geometry by recording the activity of the brian. Scientists wouldn't be able to read our innermost thoughts this way, but they could get a rough idea of the overall shape of different kinds of conscious experiences. And this mapping might allow them to finally tackle the famous question, "What is it like to be a bat?" It is certainly hard to imagine what it's like to perceive the world with echolocation, using sound to perceive space. But while we may not ever be able to get inside a bat's head, we might be able to map the shape of a bat's qualia. Perhaps a bat's qualia during echolocation looks like human qualia when we see things. Or maybe it has a shape more like that of hearing. The bat's qualia may, of course, end up looking like something else entirely--but at least then we would know that for a fact, rather than consoling ourself with thought experiments.