What Do We Do About the Next Massive Natural Disaster? 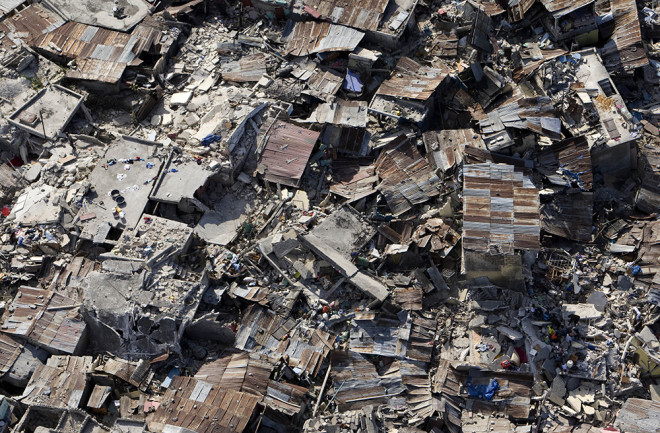 Damage from the 2010 earthquake in Haiti, the century's deadliest disaster so far. <a href='https://upload.wikimedia.org/wikipedia/commons/7/7e/2010_Haiti_earthquake_damage3.jpg' target='_blank'>United Nations/Wikimedia Commons</a>.

Few things in life are as unpredictable as natural disasters. Many times, they strike with little-to-no warning and even if there is advanced knowledge of an impending disaster, people are rarely fully prepared to deal with the event or potential consequences.

As populations rise and metropolitan areas grow, the risk associated with a massive natural disaster rises with them and that’s something that has investors worried. Last week, Warren Buffett discussed his concerns about how the economies of the world would respond to giant disasters like an earthquake in the Pacific Northwest or a Katrina-scale hurricane in New York City. In 2017, Berkshire Hathaway saw a $3 billion loss due to natural disaster, and needless to say, Buffet’s worried that more natural disasters could cause irreparable harm to the global economy.

All this got me thinking about natural disasters, especially the deadliest among them. Now, trying to compare disasters is tricky as there’s an element of apples to oranges to it. Some disasters are singular points in time (like an earthquake) while others could last for weeks or longer (like floods). Many times, it isn’t the disaster itself that causes the most fatalities but rather the secondary effects like famine, disease and displacement. However, we can make a few general statements.

First, we’re getting better at lowering the death toll of natural disasters. Most of the truly enormous death tolls come before the start of the 20th century (with one notable exception that I will discuss). The biggest culprits for killing people are floods, cyclones (like hurricanes and typhoons) and earthquakes (and associated tsunamis).

Since the start of the 20th century, the deadliest natural disaster was a series of floods that took place in China in 1931. The estimated death toll for those floods was over a million people. Floods in China have been the source of the two deadliest natural disasters in recorded history, with floods in 1887 killing up to 2,000,000 people as well.

We really haven’t had a volcanic eruption that produced a death toll over 10,000 since the 1985 eruption of Nevado del Ruiz in Colombia. Prior to this, the massive eruptions of Krakatoa in 1883 and Tambora in 1815 likely directly killed over 35,000 people each and the 1902 eruption of Pelee on Martinique killed 30,000 in a single event. I’ve discussed here before that modern volcanic monitoring and disaster planning has lowered the average death toll from volcanic eruptions over the last 119 years.

Most of the deadliest recent natural disasters have occurred in countries that are poor (or were at the time). The 1970 Bhola cyclone that killed over 500,000 people occurred in what is now Bangladesh. China (prior to the 21st century) and Bangladesh have been struck by numerous cyclones, while China has also experienced massive earthquakes. China — clearly an economic power today — still saw fatalities of over 87,000 during the 2008 Sichuan earthquake.

Since the start of the 21st century, the deadliest natural disaster was the 2010 earthquake in Haiti that killed over 315,000 people — almost 100,000 more people than the next deadliest disaster of the 21st century, the 2004 earthquake and tsunami in Indonesia. Looking at the 21st century, the natural disaster that has seen the most worrying increase in both occurrence and fatalities is the heat wave. Since 2000, there have been at least six heat waves that have killed over 1,000 people, including the 2003 heatwave in Europe that took the lives of around 70,000. A Russian heatwave and associated wildfires in 2010 is estimated to have killed around 55,000 people.

Other recent deadly natural disasters include Cyclone Nagris, which killed over 138,000 people in Myanmar in 2008, and Pakistan’s Kashmir earthquake in 2005 that also saw over 87,000 fatalities.

So, where are we? We can look at this a few ways. One is that the world might be more resilient in the face of natural disasters than it was 150 years ago. Much of this is likely due to an ability to prevent those secondary effects of disaster, like disease or famine. We are also likely better prepared for disasters in many countries, so emergency management responds quickly when an earthquake or eruption strikes. We have weather forecasts that can predict the landfall and intensity of cyclones, we can see the signs of an impending eruption, we can warn people about the potential of a tsunami generated by an earthquake (or even give people a few seconds to prepare for the earthquake itself).

However, we have also been lucky. We haven’t see a massive earthquake in the Pacific Northwest … or Los Angeles … or Tokyo. We have never seen an asteroid impact in a populated area. It has been over 130 years since the last truly gigantic eruption (Krakatoa, 1883) and we have not seen how modern society would react to an event like that or a Tambora 1815-scale eruption. These are the sorts of events that Buffett is likely most concerned about. What would happen to society if we see a big eruption from the Campi Flegrei in Italy that buries parts of Europe in upwards of a meter of ash? Is modern society that resilient?

It is challenging to plan for those outlier events. Chances are, we will never experience something like a magnitude 9 earthquake in Seattle in our lifetimes. Yet, the threat is there and in order for society to bounce back from such an event, we need to plan and prepare for it, even if it might be our great-grandchildren who reap those benefits. The same can be said for climate change. If heat waves and cyclones will become more intense with climate change, then we need to build the capacity to protect people during those events, even if they won’t become dramatically different until 2100 or later.

If we continue to just “kick the can” on preparedness with the idea that only the “now” matters, we’re only forestalling catastrophe. One day, when something really bad actually does happen, our society may not prove as resilient to disaster as it’s been for the past century.