Whales vs. Navy: NOAA May Limit Sonar Tests, but Another Case Heads to Court 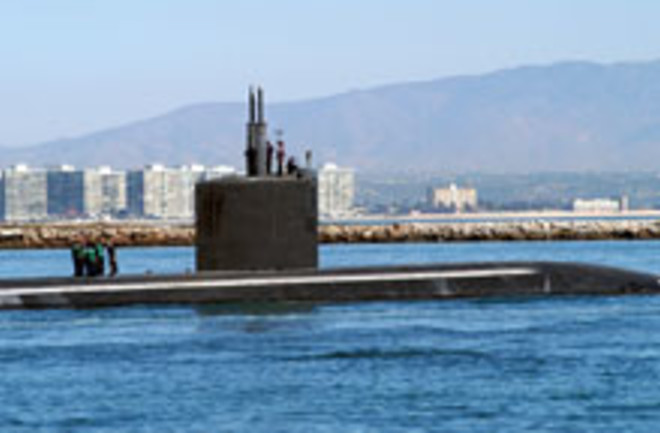 Whales and the U.S. Navy have tangled repeatedly over the past years over charges that the Navy's sonar exercises disorient or injure whales and other marine mammals. Now, whales in the Pacific appear to have a new champion: the National Oceanic and Atmospheric Administration, which is considering limiting the Navy's sonar tests in certain marine mammal "hot spots." The announcement was made in a letter (pdf) from NOAA head Jane Lubchenco to the White House Council on Environmental Quality.

NOAA also called for development of a system for estimating the "comprehensive sound budget for the oceans," which could help reduce human sources of noise -- vessel traffic, sonar and construction activities -- that degrade the environment in which sound-sensitive species communicate [Los Angeles Times].

While NOAA's new investigations into limiting the Navy's sonar use is good news for whales, it may take years before new rules are issued. And until then, fights will rage on in courts. Back in 2008, a 5-4 vote in the U.S. Supreme Court allowed the Navy to conduct sonar tests in the Pacific Ocean, despite environmental groups fighting to stop the tests. But that wasn't the end of litigation over this issue. Last week a consortium of environmental groups sued the Navy in U.S. District Court to stop a sonar project on the other side of the country, in the Atlantic Ocean waters off Florida. The proposed Undersea Warfare Training Center would cover 500 square nautical miles in an area ideally close to two Navy bases, one in Georgia and another in Florida.

However, the range would lie just outside the shallow waters where right whales give birth and nurse their calves each year from mid-November to mid-April [Los Angeles Times]

. Right whales are an endangered species numbering only about 350, researchers believe.

"Right whales shouldn't be subjected to the threats that accompany this range -- ship strikes, entanglement and noise disturbance -- in the only place in the world where vulnerable females give birth to and care for their calves," said Catherine Wannamaker, an attorney with Southern Environmental Law Center [Environmental News Service]

. The Pentagon didn't responded to the lawsuit immediately, but the Navy has previously stated it doesn't believe the project will cause major environmental harm, and that it would halt construction during the whales' five-month calving season. The Navy's own environmental impact statement notes that sonar can harm whales, though scientists don't completely understand the specifics. But the environmental groups say there's more to this case than sonar:

Ship traffic in the calving grounds is of particular concern since data suggests female right whales are struck more often, possibly because they must spend more time at the surface with their calves which have undeveloped lung capacities [Environmental News Service]

. Because of the extra issues besides sonar, and right whales' status as critically endangered, Wannamaker says this is a different case than the 2008 one that became a Navy victory. In that decision, Chief Justice John Roberts wrote that national security and military training outweighed the concern for the whales in that case, but that they wouldn't necessarily trump the environmentalists' arguments in every case. Related Content: 80beats: Navy 1, Whales 0: Supreme Court Allows Navy's Sonar Exercises 80beats: Supreme Court Hears the Legal Dispute Between Whales and the Navy Reality Base: Whales Battle U.S. Military… and (Probably) Lose 80beats: Who Would Win in a (Legal) Fight: A Whale or a Battleship? DISCOVER: Killing Whales With SoundImage: Rialyn Rodrigo/U.S. Navy