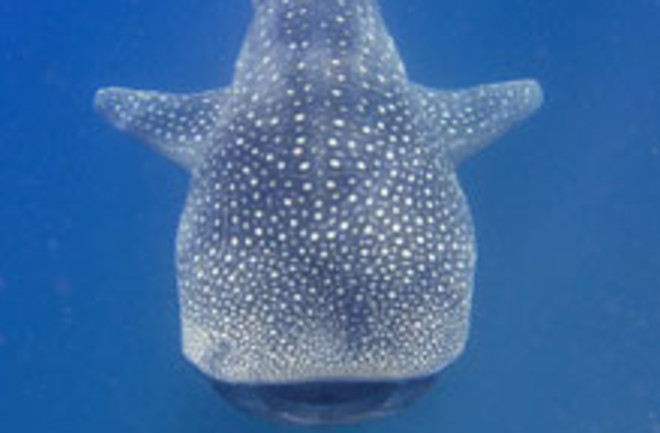 For a big, lumbering creature, it sure is mysterious. Marine biologists don't know much about the massive whale shark, which is considered the biggest fish on the planet.

They don't know how many there are or whether they are migratory, and its reproductive habits are obscure. There are even disputes about its size but it can grow reputedly to 60 feet long and weigh as much as 40 tonnes [Telegraph].

The behemoths use their weight and gravity to plummet through the water at great speeds, researchers announced on their website.

However, one thing researchers thought they knew was that whale sharks aren't the speediest fish in the sea; in all previous sightings, the behemoths have always been cruising slowly just beneath the ocean's surface.

Now, after a couple of enterprising researchers clipped electronic tags to wild whale sharks near western Australia, biologists have realized that deep below the surface the creatures dive at great speeds, and that they use the same principles as a diving hawk. "It is like the way a bird dives – but, in this case, a bird as large as a bus," said Professor Rory Wilson, who has tracked the movements of the threatened species [Daily Mail].

“We found they are basically not using any energy to move — they are diving down in a glide like an eagle or a falcon. Because they are using no tail beats they are literally sinking,” says Brad Norman, one of the research team, from Murdoch University in Perth [Nature News].

Researchers say the information about the sharks' graceful locomotion is only the first piece of data to emerge from their ongoing study of the sharks' habits. The electronic tags on the sharks' fins beam information back to the researchers' computers every few seconds, giving them precise records of the animals' movements. The researchers hope to use future data to identify breeding grounds and the extent of their habitat. Closer to home, the whale sharks at the Georgia Aquarium aren't doing any diving because their tanks aren't big enough. However, they are getting some up-close scrutiny. This month the aquarium is

launching its "Swim With Gentle Giants" program this month -- allowing a dozen swimmers and divers per day to enter the sharks' habitat [Los Angeles Times].